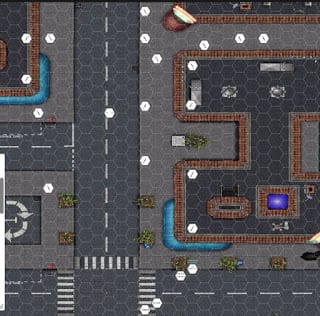 We are on patrol as a group, when we come across 20 guys robbing a store. But they’re all the same guy, in the same super-suit, and a bunch of SWAT gear, knives, a sword, carbines . . .

The Commander has Observation-31, so there we go. We’ve also got copies of guys on the roof, with sniper rifles. My Tactics roll was made it by 14, and that allows me to give either 4-5 karma points (re-rolls) or 14 “steps.” Given the tactical situation and that we’re in the middle of the street, I choose movement. 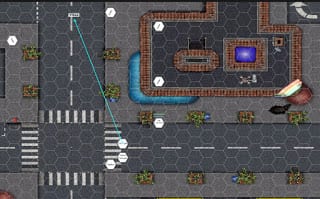 And Katana, the Okinawan sword expert from a prior game that we won over to our side, is also there. That’s The Commander’s future wife, for sure. He’s convinced. True love. Also Saorise Finnegan, who is apparently also one of the best swordswomen in the world.

Anyway, The Commander and Eamon take cover behind a plant . . . but Katana grabs me and teleports me to the roof. That’s right, she’s a blinker.

Zephyr, unsurprisingly, is up first as we start out in media res, and bolts off to his first target, grappling him and using his Altered Time Rate to run over and cuff his hand to his leg behind his back – the guy’s got an assault rifle, and we’re trying to start with the high-threat guys. Guns and sniper rifles.

Saorise (Soor-sha) runs up and attacks another rifle-wielder, and cuts his rifle in half. The Commander runs up to a guy with a Barrett .50-cal, hits him hard on the leg as a distraction (which he pulls his damage to 2d+7 which is 11, which is plenty distracting), then grapples him by the neck and throws him to the ground, stunning him.

Arc Light pops a series of smoke grenades to obscure the local terrain after flying into the middle of the street, since we’re a bunch of sneaky bastards, this will help us more than it will hurt. With an 8-yard obscuration radius, and six grenades on tap, he can blur a lot of territory.

Saorise gets stabbed in the gut by the guy whose rifle she cut in half – Overconfidence takes a toll.  Arc Light gets shot at a few times by the guys with the .50-caliber rifles. A nifty acrobatic dodge later, and he’s still getting shot at by more guys. These bullets are large and with miles of range; stray fire is a problem here. I relay a request to Arc Light to keep his flight pattern down, assuming that the 52(2) pi+ damage he just took didn’t kill him.

People try and take a few shots at Eamon too, and a bunch of guns jam due to some spectacularly bad die rolls. Eamon responds to the guy who stabbed his cousin with a no signature gravity sledgehammer to the back of his head. He decides that 5d6 should be enough to deal with a DR12 SWAT helmet and DR 2 skull, with a budget of 1d6 for a head wound. He rolls 23, less 14 DR, for 9 points through. He’s KO’d with unpleasant head conditions, but he’s neither dead nor dying so there.

Oh, good. When the guy in front of me got up, he pulled pins on his grenades. Lots of grenades. The Commander has a plan, though – he’ll throw him up in the air and then have Eamon loft him into the air. The grenades have been modified, possibly in the fuses, so we might not have much time. I don’t like the fact that these guys seem to be indifferent to death. We may need to find the master clone here.

Zephyr binds up two more guys so quickly they’re not even on the ground by the time he’s done. Saorise slices up a guy’s kneecaps, incapacitating him.

The Commander takes the guy and throws him 22 yards into the air, expending extra effort to do so – ST 28 and a 5d double knockback blast will do that. Hang time is about 4 seconds . . .

One of the geminis kips up and kicks Arc Light hard enough in the chest to dent his armor. These guys are not normal as well as well-equipped. He goes for a power-block using his electrified armor. He rolls a 5, so he makes it look good. So yeah, he takes a hit, and electrifies the heck out of him for 5d burning. Not a good trade for him. And the Arclighter is born.

Someone fires a .50 at Zephyr, who sidesteps, which causes one of the other Gemini’s to take the hit, and he turns into street pizza. Ooo. Friendly fire is the most accurate fire ever – the GM rules that the arm is severed at the shoulder (the guy rolled a 4 for HT), but he’s cuffed so now he’s dragging his severed arm by his leg. We pause to remind ourselves we’re cops.

Zephyr gets shot at again, and he dodges again. In the meantime, an airborne Gemini explodes messily, but he’s high enough that it’s outside of the lethal frag radius, so mission accomplished there.

Arc Light gets critted (he takes care of that with a karma point), and gets shot at again. We really need to take care of these .50-cals. 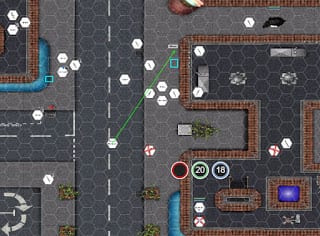 Zephyr gets attacked as one of the Gemini’s swings his own severed arm at him, and crits. This is mitigated by 2 karma, and Zephyr tries to catch the arm, so he can heal it back on to the guy, which will actually re-handcuff him. We are not normal people.

The Commander gets another grenade tossed at him, and he uses his scabbarded sword to aggressive parry it – basically he plays baseball, and knocks it way the hell up into the air. Boom, harmless again. 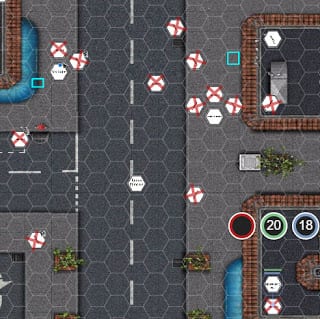 Oh, but the bad guys have all bunched up, so Eamon sees an opportunity for an area attack. His 9-yard area effect (selective) targets only Geminis, and he lays down the Gravity Slam.

Boom. 30 crushing damage later, from overhead, no signature. It just hits. And 12 guys take the fall, all at once.

Now Zephyr, arm in hand, takes the guy who’s still standing (good DX roll) with a severed arm and tries to reattach the arm magically by making an attack. I guess this is basically the opposite of a Disarm? A re-arm?

He spends the right fatigue and karma and makes it happen.

Meanwhile Yukio has already stealthy put one of those guys in the alley to sleep, and is working down the road. We’re really down to four foes remaining here, so we try and force a morale check – which succeeds.

So we wrap up the fight, and disperse the smoke. Tale of the tape, one dismembered and healed, one blew himself up, three unharmed and surrendered, and the rest down. But the jewelry store is missing loads of stuff.

The bodies do not disappear, either. They’re disarmed – this gear is absolutely top of the line, too. We run the numbers, and they were bought at a wholesale show by a “legit” shell company with a large line of credit about a week ago. Each guy was probably outfitted at a cost of about $70K per mercenary. The rifle alone is $10K, grenades, body armor, etc. These guys were seriously lavished-upon. And since there were 20 of them, that’s like $1.5M in gear.

We feel like we’ve been played. This was a distraction to keep us busy from  . . . something.

Each conscious Gemini is displaying a different emotion, too. One nihilistic, one afraid, etc. We pick one, and Eamon focuses in on that emotion, targeting to play each of the different emotions off of each other to try and find out their motivation, or at least what they want us to think it it. Also a ringleader if possible, what their mission was here . . . and if these guys are actually clones.

As far as they know, they were hired to rob a store.

Oh, wait. Here’s an optimist. He knows that we were doing the wrong thing, etc. They’re all now arguing with each other about things – one making comments about Katana and Saoirise (that won’t end well), another taking him to task for it . . . and they identify each other by their own emotions. Optimist calls the other Nihilist, and says they wanted to be a superhero once. But she wouldn’t like that.

Oh? She? The other half of Gemini is the female, after all.

The frat-brah just keeps telling Katana to show her . . . yeah, she drops her sword and starts in to probably lawnmower start this guy’s testacles. I convince her that doing that, while satisfying, wouldn’t be much of a challenge and not worth her effort. She goes off for a chai latte, and blinks away. Small victories.

We do a quick count. There were 20 people, one blew up, and . . . we’re missing one. We find out, perhaps unsurprisingly, that Dopey blew himself up, and that the first duplicate is the one missing. Where’d he go? He can’t tell us, because they’re not supposed to let him get hurt.

He also mentions that Obsessive would be the detail minded one, but we probably don’t want to talk to him. I’ll put my five bucks on Eamon on that one.

He interacts with Obsessive. Ah, he knows exactly where the missing brother is. Eamon continues to work his magic on him, messing with his foibles, asking leading imprecise questions that rouse his ire, and then the Commander says “isn’t there one of you guys who would be a bit more likely to tell us where your sister is?”

Eamon starts to interact with jealousy. He likes Eamon’s tie. Eamon gives him the tie. We get a description – slender, dark hair, “too pretty,” maybe 5’6″, name of Micah Jaridian.

Oh, and the clones die. Quickly. After they’ve been away from the originals too long.

Oh, and Micah set this up as some big distraction for our team. Ah ha. As we thought. Some guy in a baseball cap with a big scar on his right cheek. Where did they get the gear? Back at the Honeycomb Hideout – a warehouse in the meatpacking district. 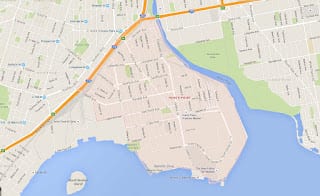 So we now need to find someone – and we have Yukio of the killer nose, notes Zephyr. And The Rat Queen, she of the discriminating sense. Also, Thaumatology connection, which Zephyr can follow.

We work our mojo, and we locate their building precisely, somewhere in Hunt’s Point.

We agree to stop here…

Good session. Good use of super tactics and stunts, minimal fatalities, and good interrogation. Everyone had stuff to do. We give Eamon MVP for both being talky and the major 12-guy smash.