We started in a basement, and exploration revealed some sort of stinky ooze. We tried to set it on fire with magic napalm. It sorta ran away, but we realized that we’d cleared a path for it to follow.

We ran away, looking for trade goods in the form of napalm. We cleared out a stable where there used to be goblins as a future base. We wandered around and found an MC Escher stairwell, which confused us all mightily.

We tried a different stairwell, went downstairs, smelled foul ooze, saw one chasing us, and sprinted back up the stairs.

This is interval training, adventurer style.

So we decide to check out “the overlook,” an area we’d not explored before. We look. More spiderwebs, but nothing . . . wait. A glint of copper in the north shed. The spider strands run down, down, down, down. Wow . . . they wind up in holes in the cliff, and from there they go down down down more into the mist-shrouded valley below.

Oh, and then we trigger a scything blade trap. Human neck level, and waist level. Thomas interposes his shield. . . . and it hits the shield. 10 cut to the shield itself, what with it’s DR 7 and 40 HP or whatever.

I mean, really, who sets a trap on garden tools?

The dwarf (Curious, Greed) decides that if some asshat has done enough work to trap this room, there must be something valuable here. Treasure, secret doors (maybe in the ceiling, because Driders), or something. He burns Luck, and does searches and trap finding and . . .

That means we’ve validated his paranoia, and we’re going to spend the rest of eternity tossing these rooms and checking for traps.

It’s about 12″ x 6″ x 6″. It’s kinda heavy. Heavy is good. It’s also locked. One lockpicking roll later, it’s open, and a small cloud of green/yellow gas shoots out and covers him and Neil. Neil takes 4 HP of injury due to acid, and all his armors drop by 1 DR from ablation. Gonna need a new ballistic cloth vest. 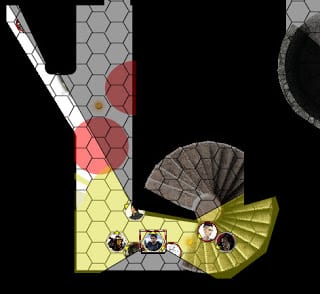 Our (Greedy, Curious) dwarf decides we need to search every other room here for similar finds. Neil is going to stand 3 yards away from him at all times, because he used to be pretty.

The southern shed  is empty.

We wander around some more, and eventually we find the goblins again! We buy five or six Potions of Napalm. We establish that the local rate of exchange from gold to silver is far inferior to back on Earth, so we need to be stingy with gold here. We also pick up a potion of fire breathing. And we decide to go hunt oozes with fire. 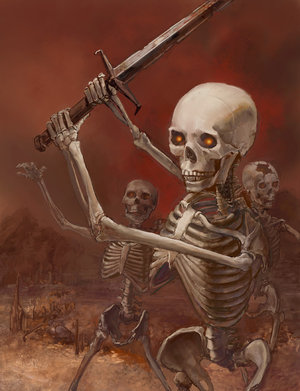 When I return from putting my child to bed, we’re flinging fire at the ooze, driving it away and taking some fireballs in return. And then some bone piles start getting up . . .

We’re told that chest is one of the great treasures of the castle: the Lepruchaun’s Pot of Gold, which was actually a chest.