A while ago, I took a stab at a Grand Unified Beat theory – basically a system for resolving beats that blends well with a bunch of other work, specifically working from the notion of building on Setup Attacks from Delayed Gratification, which I was poking at pretty hard at the time.

OK, but on a re-read, this is really fiddly. Not surprising – my desire to cover obscure circumstances or to add flavor can mean I drown the GM in modifiers.

Much like the Rules for Grappling Rules post, if we’re going to try and unify this and make it nicer, I need to follow my own advice.

Rule #1 is simple – use existing mechanics where possible. If I can, I need to ensure that the usual flow of attack declaration, resolution, defenses, etc. is unchanged if it can be. Just more interesting outcomes. Use as few rolls as possible, and make the results intuitive to the user.

So, on the attacker’s side there’s an attack roll, and if successful, a damage roll. I’m going to take a page from the way we play online, though, for one small deviation that will hopefully have a lot of oomph to it: always roll damage with the attack. “I roll vs. a net of Broadsword-13 to hit, doing 2d+2 for 9 points cut if successful.”

On the defender’s side, there’s skill, a defense roll, and the ST rating of the weapon itself.

The Basics – on the attack

A super-strong creature wielding a rock is going to hit really hard. A moderately strong person smacking you with a mace or halberd is also going to hit very hard.  That suggests to me that the damage roll sufficiently amalgamates those two together to stand as a proxy for such things in most cases. So on the attack, knocking a weapon away, striking to damage a weapon, and a beat can all be resolved with an attack, and if successful, a damage roll.

Note that I’m not going to deal much with striking to damage. That seems fine in principle if perhaps a bit undefined: strike the weapon, if you hit, roll damage, subtract weapon DR (usually 4 for hafted weapons and 6 for steel), and check damage to objects rules p. B483-485, especially the box on p. B485. ‘Nuff said. For now.

The rules for beats presently can be found in GURPS Martial Arts, pp. 100-101. In it, a Beat is a variant of a Feint, but can only be done if you meet certain conditions (for example, to beat your foe’s sword out of their hands this turn, you must have attacked your foe, and he parried with his sword, on your last turn).

The Beat is resolved as a quick contest of ST or DX-based weapon skill. As it’s a type of Feint, you get penalized 1-for-1. So you’ve got about a 50% chance of a Beat working or not for equal combatants, and we’ll want to preserve that.

But to qualify for a Beat at all, you’ll need that contact between weapon and defender’s shield or weapon. That’s probably can be simplifed as “someone made an active defense,” which is probably about a 50-50 proposition (for every hero out there with Skill-20 giving Parry-14 with Combat Reflexes, 15 with a retreat, and 17 with a medium shield, there will be rather more with Skill-10 and Parry-8 hoping to survive the next battle).

In any case, you don’t want a modified Beat rule to produce a more-certain beat for equal combatants than around 20-50%, so that it becomes a better plan than attacking.

That being said, in real sport fighting – fencing and kendo as personally experienced examples – a beat is a classic and frequent way to open a line of attack. In fact, it’s critical to do it, because otherwise you can’t even penetrate defenses. It is possible, however, that this sort of thing is below GURPS’ resolution, or (more likely) is the sort of thing subsumed into Deceptive Attack.

What if you try and parry with a main-gauche instead? ST 13 and ST 6 for the weapon is ST 19, or 2d-1. On the average, a thrust from the sword will be a half-point lower than this, but a swing will be a few points higher. That mostly tracks; against a rapier at ST 9 it’s a reasonable defense, but against a broadsword it’s overmatched by a few points.

Remember – this is about a beat, not breakage. So if we assume that the knife won’t chip and shatter, with equal ST and skill then it’s basically a contest of weapon mass at a point of differential per two points of MinST difference (yeah, it’s just ST, but I’ve called it MinST since 3rd edition, and it’s a hard habit to break).

So what do you do? I’m going to suggest on a successful beat the attacker rolls his damage if he hits the targeted weapon or shield. The defender gets to counter by rolling damage as well. If the attacker’s damage is higher than the defender’s, the difference is applied as a penalty to the defenses that lasts until the next turn of the beating fighter or the defender takes a Ready maneuver.

I’ve been a bit vague at this point about the defender. I’m noodling.

I think the defender rolls against Retain Weapon as a parry (Retain Weapon defaults to full weapon skill for any weapon, so the base case is “parry the beat normally.”

I’m thinking margin of success or failure on the defense adds directly to the damage roll to resist the beat. Yes, this means a deceptive attack can trade skill for “damage” at a 2:1 ratio, but then, you can do that with Deceptive Attack already, and Feints are 1:1.

A critical success on the attack roll, and the damage roll is unopposed.

A crit on the defense roll and beat is just spoiled, no matter what.

Anything else, take the margin of success or failure for the parry and apply it to the damage roll to resist the beat.

Attacker: Rolls at -4 to hit the broadsword at all. Without bonuses like Telegraphic, All-Out, or Committed, he’s rolling 8- here, so only 1 in 4 times will he even hit the blade. If he does hit, the Parry is at 9, so on the average, he’ll fail by 1 (even up if he retreats). Then damage, it’ll be 2d swing or 1d+1 thrust on the attack, vs. 2d-1 or 2d+1 on the defense. There’s not much incentive not to swing for the beat, so we will. On the average, then, one time in four, he’ll get a -1 to defend. In practice, on a hit, the attacker will roll 2-12 damage as will the defender, but might make the parry by as much as 4 or fail by as much as 8 excluding crits. So defenses range from 2d+4 to 2d-8. So can absorb 0-16. So the net will cluster around “not much happens” be can go anywhere from “beat is defeated” to “defenses are at -12.”

I’m thinking if you manage to do more beat damage than the defender’s ST for 2H weapons, half ST (round up) for 1H weapons, the weapon gets knocked out of your hands. Again, in the example, that’s 7 points for a 1H broadsword.

If you have the disarming technique, go ahead and roll that when attacking.

Polearm will roll for Beat at 14, hitting 90% of the time. Broadsword will roll vs Parry-9, on the average failing by 1. On the average the penalty is about -7 . . . not only a huge penalty, but only one point less than what is needed to disarm.  And for those keeping score at home, on hitting the blade, 1-16 points of damage will punch through the DR 6 of the steel sword, which should be about 11-12 HP total. So while it might not start to fear disabling in one hit it will certainly be disabled in two.

Note the same math will hold for a ST 23 ogre striking unarmed (more or less), including breakage (the optional rule to treat heavy limbs as if they were BL/20 instead of ST/10 helps here, treating ST 23 more like a 5.3-lb weapon than the 2.3 that the normal rule recommends. Note this is more threatening for breakage than RAW, too – the 5.3-lb ogre hand can never break the broadsword in either case, but is quite dangerous with the modified rules. 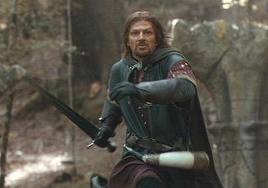 This is a case where Trained ST would make sense. Boosting the effective ST for high relative skill better reflects life as I’ve experienced it . . . but again, most of what I’ve probably experienced are the small beats that are Deceptive Attacks, not the big Boromir Beats

I call them Boromir Beats because that’s really, really what he was doing during the battle at Amon Hen. Two beats to knock aside the Uruk’s shields.

So what about Shields. They’re heavy in the Basic Set . . . but with no ST rating. Even a pixie can wield a 15-lb Medium Shield, which should probably have about 20 HP (but the basic set lists 40). Giving the shield effectively ST 20 (equal to it’s HP) for the bashing role woudn’t be crazy-time. The 12-lb gada has ST 13, but while heavier, the shield has a much shorter reach and is not really optimized for striking. Calling a 15-lb shield ST 9 (so it’s just under 1xBL) wouldn’t be crazy, but that seems low for the purposes of beats. A 15-lb sword (doing some curve fitting) would be about ST 16, while an Axe would be ST 17 and a polearm for whatever reason would come in at about ST 14. If we want shields to be big bad beat machines, they’d contribute something like ST 18 to the mix.

But that’s on defense. A shield bash only does thr cr, so 1d for ST 13/14. Not going to be enough by a long shot. I’d be inclined to add double shield ST (so ST 18) to the user’s thr damage to calculate both beats and resistance to them. So Mr Shield would both beat and defend vs beats with 3d+1 or so. Just less than required to stand toe-to-toe with Mr Dueling Polearm above (-3 shy of equality). Sounds about right

I like the symmetry of rolling an attack and damage for beats. Adding and precalculating the weapon’s ST rating to get a beat defense value is a one-time-before-play bit of math. The numbers produced aren’t crazy, and thus far are smaller than lopsided skill total Feints.

I might have to try this one if I ever GM a fantasy game.