The Rat Queen is vibrating she’s so nervous – she’s not exactly a socialite. Eamon is trying to find and sidle up to the politician’s wife and see what signs of abuse she might display, and he’s brought The Rat Queen as his plus-one. Zephyr makes jokes about being an albino chinese guy, so he joins the wait staff.

The John C Campbell education for the poor is collecting donations. Gold bricks can be dropped by the door (it’s that kind of crowd).

Eamon is actually invited to the party; Blue Sky (the PMC the slimy politician used to run) doesn’t like Arc Light’s company, so even though it’s his sort of circle – at least when he’s not in his battlesuit – he’s not invited directly.

He decides to show up with one of those lottery-sized checks . . . for $10 million. Guess he’s got that kind of money. The Commander goes in dress blues, and if he needs to make a donation, he’s got the funds. He also brings Yukio, in disguise. The dog has wicked stealth skills – like Clark Kent good.

We decide that Zephyr will offer up a series of provocations to the Congressman and his wife, and see how it works out. We expect that Congressman Singleton’s wife will be nice and forgiving, and the Congressman will go nuts, berating Zephyr for being an ass, and will betray his nature by how he treats her for acting nicely.

Eamon is on the scene – as intended – and concludes that he is at minimum psychologically domineering, definitely mentally abusive, and likely physically abusive as well. So we at least find out that yes, Elena is correct in pointing us in this direction.

Not that it puts this issue even a tiny bit in our jurisdiction still, but at least we’ve not been overtly lied to. There are plenty of other celebrities here, including the van Dorian family. The only son in particular was kidnapped in his youth, his parents died in the Trans-Atlantic Pulse, and granddad literally helped defeat the Nazis in his day. The elder van Dorian – we remember him from the time-travel video, he was one of the people trying to stop the experiment. Grandson is also dressed in Class A uniforms.

So we’re surrounded by the eccentric and rich elite. Arc Light is suddenly very popular, and so he starts name-dropping and trolling to see if someone will one-up him by donating to Eamon’s non-profit.

We definitely found out that for smarmy Singleton to win as a Republican in a nominally blue district, a crap-ton of money was raised, funded, and shady deals were done.

So Eamon is going to try and interrogate Singleton, looking for more angles to research. Places where he’d be less guarded, and more open to let things slip. He spends two Karma to turn a success by “only” seven into a crit.

Turns out he’s into hunting, collecting knives, and the history of Ancient Rome. He even wears a pinky ring with SPQR and a laurel on it, and even wears a purple tie.

Eamon engages him in conversation; he says “I would have taken you for more of a goodie-two-shoes.” Eamon starts talking about metahuman self-defense; Singleton notes most metas are really just animals that need to be trained. But nonetheless, he offers Eamon contact information to maybe be hired by Blue Sky. For seven figures.

Eamon wonders how they’d separate the two of them (Singleton and his wife). He asks how the two of them met (he was wounded and recovering in Germany, and she was a nurse). There’s obviously dirt to be had.

The Commander really only has two goals. He’s going to chat with everyone and be well-known, and make small-talk and introductions with the Singletons; he’s leveraging the giant cute dog (who swears he’s not going to rip any arms off) to provide a distraction. He’s also going to pay his respects to van Dorian, noting that he remembers seeing him in a war movie once maybe.

We do find out some things in the schmooze fest.

We needed a legal surveillance warrant to record the conversation between Singleton and his wife in the car. We find a judge at the party, and request a warrant. The judge hates Eamon for some reason, but grants a very, very limited warranty based on the physical evidence and expert testimony. Arc Light whips up a sensor drone, and crits. We lose video right away, but we hear the Congressman say that the interlopers would be taken care of, that the wife has attracted do-gooders again, wondering if she’d been talking to her cousin again (A-HA!!). He threatens her by flourishing some sort of balisong or other expandable weapon.
The team starts to make plans to get this guy right the heck now,by forwarding information and stuff to an aggressive DA and/or police department. I caution against this, since Singleton is powerful, aware that we’re looking at him, and actively planning on doing something to us.

So we go working a few angles. Eamon goes to talk to Elena, and arranges some coverage and confirms that the Congressman’s wife is her cousin. He also notes that we might need to get the wife out, and that she may be suicidal; she’s reached the last straw. They continue to discuss motivations for why she’d want him in jail, vs dead . . .

They also detect that someone’s surveilling them during this whole thing. Zephyr takes things into his hands and Leeroy Jenkins’ his way up to the car, getting a view of the licence plate and the driver. He can even zoom in and enhance. We look it up. It belongs to Blue Sky.

We switch camera angles, and contact my cousin’s husband, who’s nominally a homicide investigator, but he’s really a jack-of-all-trades, and gets called in to all sorts of things. His real name is Severus Ulyssess Edgeworth. Degrees in Law, Sociology, plus a killer instinct for closing cases. We set up an appointment and head over.

He’s in a martial arts/self-defense class, teaching it. We eventually see them passing around a jar, and yes, it’s a “who can hit the instructor?” jar. We spar, he defeats me easily despite my two attacks and skill 20, and then get down to business. We share our info, and he pulls out two huge stacks, one on Singleton, one on Blue Sky. 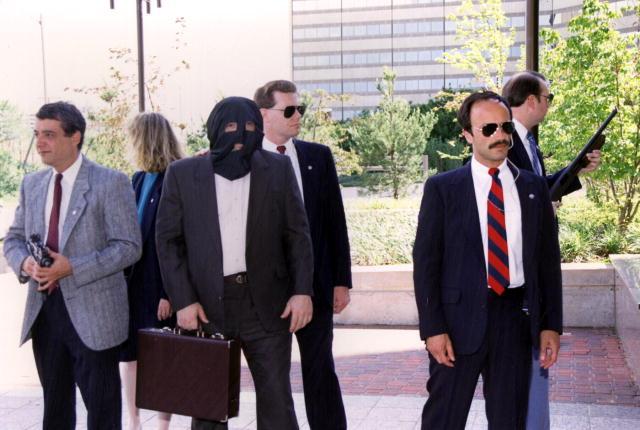 It’s on now. He opens a case, and wants to go over right away and try and extract Leslie Singleton; it might be our only chance before Congressman Singleton makes her disappear. We can probably get her out, but then it ‘s all-out war. I suggest that we involve Callahan (Eamon’s patron), and Eamon arranges to try and get her into Witness Protection.

The hard part will be getting a hold of Leslie and convincing her to talk. We do what we can to cut down the bureaucracy . . . but once we pull the trigger on it, we’re still going to have to keep her out of trouble and out of reach for maybe 32 hours. That’s a lot of time given the resources at Blue Sky’s disposal.