We had a limited group – just +Anne Hunter and +Wright Johnson. The rest were no-shows, but Anne suggested game on anyway, to see if two 7th level barbarians could tackle the remainder of the adventure.

It was not designed to be too difficult, because I started it before we had the playtest results in that showed that the challenge ratings worked pretty well even up through 20th level.

Anyway, no blow-by-blow this time. But highlights: 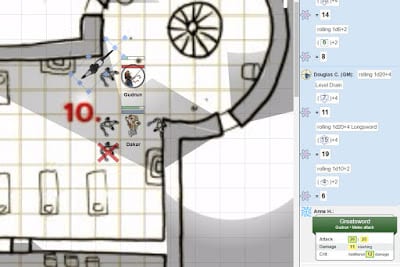 Falling is appropriately nasty in Dragon Heresy – the shift to a wound rather than a hit point basis is badass. It makes falling from a height quite risky.

It would have been trivial to keep the pressure on with attacks from other monsters in the castle as they were trying to rest. I didn’t, but I could have. Probably should have. SRD5-based games are resource management games, and denying the ability to replenish resources is an important part of the GM arsenal for posing challenges to players. Being trapped in a castle infested with undead and getting into noisy melees will definitely bring out curious monsters. Should have planned for that in advance.

Good session, had a few learning experiences. So useful!

[1] We talked about this after the game, and decided that this won’t work – the runes are used on oneself, not others. Still, it was a great idea.