When we ended last game, “remnants,” pieces of the void made manifest, are pouring through a rift in reality. We all spend all of our karma to move the “dead-o-meter,” which is the fraction of the population that will be destroyed in this disaster. I have banked lots of spare karma, so I drop 17 karma into the “ppl not dead” column, reserving 5 Wildcard karma (think of ’em as destiny points or bonus points) for special successes and stuff during the game. Zeke spends 13, also reserving 5. Zephyr keeps his for stunting, which he does a lot. Eamon throws down all 10 he has. So we drop 40 karma into the not-deadpool.

We also get asked what level of risk we’ll be taking. “Ludicrous risk” and “all the risk” are the basic answers. We all take the +3 risk pool. It’s BAD – “B-Team Awesome Difficulty.”

The remnants are nasty. Six limbs, black chitinous nasty, flying, getting bigger. Only kyberic energy works against these guys.

We need to literally put a lid on Yankee Stadium in order to contain the “locusts” that are coming out of the tear in reality.

The players make a quick decision out-of-game to keep all decisions quick and sharp, to mimic the panic and stress in-game. Yay.

Maxwell suddenly goes limp, and something black and wraith-like, or mummy-like, emerges from the deflating body. We knew something wasn’t right about him. Meanwhile Zeke turns on the broadcast booth remotely using ESP to keep all of the MAPS teams aware of what’s going on; and everyone else who can see it too. That doesn’t go over well.

Eamon and The Commander manage to throw up a massive TK force field above Yankee Stadium, containing the disturbance. Zeke manages to overwhelm the comm net, throwing some of our allies into confusion. Richard and Merlin cover the exits with their powers, and do a nice job of thinning the herd a bit, but there are so many remnants.

The other MAPS teams manage to contain the disturbance to the vicinity of the stadium, and our flying supers are managing to either take on the flying locusts or helping manage evacuations. Still can’t prevent mass casualties, but things are better than they would have been.

The shield starts to shimmer and shift, and goes from just over the top of the stadium to about eight blocks out, then sixteen blocks, then slams shut like a giant vault. The Commander recruited the crystal skull he’s been carrying around all this time, to good effect.

Saorice (Sore-shah) and Stephanie need to get close to the rift to complete the ritual. Zeke tries to block the gates with tangler arrows. We form up around Stephanie and try and move as a group to the portal. We continue to fight inwards to the stadium center, with support from supers all around, and are hip deep in remnant remains. The Commander asks the Skull to pull the shield into a sphere and pull it in tight. It attempts to do so, successfully.

We start to take our first wounds – Zeke takes some hits. His regeneration helps, but he’s hurt a bit.

Terry Ann Diggs, we discover, is the doorstop keeping the rift open. Otherwise, it would try and close. We can do the sacrifice to shut it, but with her in there – and she’s immortal – the locusts could just reopen the rift again. So we need to get her out of there, and do the thing with the sacrifice.

Eamon turns around in time to see Saorice staring blankly at the sky, and then her head gets removed in a fountain of blood. Her sword drops to the ground and Stephanie screams.

We’re still outnumbered as heck, and Eamon spends some karma and makes a very opportune boosted gravity slam; we’re down about 20% of our total force; 50% bad guys. The Commander goes to Tactics, and rolls another damn 17. Whatever. We spend points to turn it into a crit success, and The Commander adds +7 to the force commander’s tactics/strategy roll. We hold our position; the bad guys take another 20% loss.

Zephyr pulls us into a circle, and passes out the magical healing.

Two hours into the battle, and we’ve finally fought onto the field, within striking distance of our goal. We’re all down 4 FP, save those with Very Fit. (Zephyr and The Commander both have it; we only lose 2 FP). 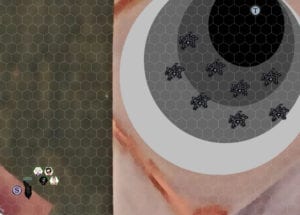 Yukio is charged with keeping our ritualist alive. The closer we get to the rift, the more light fades and is eaten. Even now, we’re at -5 to all vision rolls, including hit rolls. There are several large critters guarding the entrance and the rift; we’re facing eight bad guys, and have Yukio and five PCs.

The Commander starts to lay down a plan. He’s ignored as the PCs revert to form and Leeroy Jenkins into combat. OK. Let’s do this. He’s still got his 6.8mm rifle with the magical explody kyberic bullets that do ridiculous damage.

Zephyr decides to trash-talk the remnants. Zeke deploys a gadget and completely incinerates two of them, but causes a separate tear in reality as a result.

Maxwell does a mummy smash! move, and delivers spectacular crushign damage on one more guy. We’ve eliminated five of the eight, torn a new hole in reality, and now ’tis the bad guys’ turn.

One runs up to Zephyr and stings him; Christopher pulls doom to ensure a hit. And more to ensure a giant hit/damage roll. The venom works into Zephyr, and will kill him in 6 turns.

Another comes running up to The Commander . . . crit fails it’s attack roll, and the roll on the table means he knocks himself out. Really. The last charges Maxwell, but misses and runs past.

“Vengeance is mine,” sayeth the lawyer. He Telekinetically grabs one creature and slams it into the other.

Stephanie gasps and rushes forward; Zephyr pops his Altered Time Rate and goes for three rapid strikes on the guy that just killed him. Six attacks . . . and the first is a natural 3 for the attack roll. The first attack beheads the creature. He uses his second action to run into the void and try and pull Teresa out; he cuts her free!

The Commander finishes off both of the remaining creatures with his explody bullets; Zephyr removes Terry from the rift zone. We patch up Zephyr enough to keep him alive until we can complete the ritual; Zephyr is going to die. He’s in excruciating pain and we cannot reverse the venom. Conveniently to the plot, we need a willing victim who is loved by the person doing the ritual. 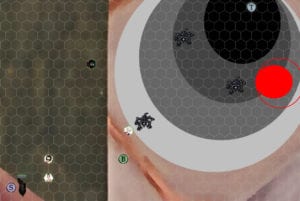 Suddenly Stephanie drops the knife and fades, and starts to laugh. Her seeming fades away. She has chalk-white skin, long ears, purple cat-eyes, and inhuman beauty. The same, but inhumanly different.

“We couldn’t afford to keep you here, you’re just too useful to the humans.”

The expanding rifts intersect; things get weird. We wake up on a hellish landscape elsewhere. Zeke recognizes it as where he grew up. When we look at Zeke, we see he has the same chalk-white skin, purple eyes, and pointed ears.

A wind whips up in the distance; we see Zephyr dead on the ground. Elf-girl and Kyle aren’t here. The rest of us are; Zephyr is dead, and Zeke’s an elf too.

And that’s the game.

One thought on “Aeon S4E11: The End of All Things”