In many ways, Cadmus, my Warrior Saint in +Nathan Joy‘s Dungeon Fantasy game has been an experiment. He was my first DF character, well, ever. He used new rules – Divine Favor – rather than the standard magic system. I also solicited and accepted a lot of steering on how I put him together.

Now that 280 starting points has grown to 330, with many sessions under my belt, what would I do differently? Are there general theories that emerge? 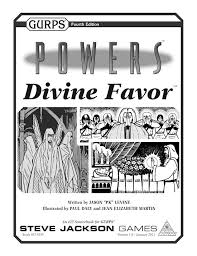 First, while I was told that initially I’d be ‘the backup healer,’ I was also steered to a level of oomph in those abilities that really equaled ‘a redundant primary healer.’

By and large, this is a good thing. DF games are notoriously violent, and if your primary guy goes down due to, say, a ninja sword in the back, you need someone who can step up. Or a metric crap-ton of potions.

Also, I don’t know if I’ve just rolled well, Nate’s been kind, or what, but the General, Specific, and Learned Prayers that Cadmus has brought to bear have been really, really fun. Of course, they don’t always work (General and Specific prayers; LPs always work), but when they do, they’re an immense power multiplier.

Once you hit Divine Favor at level 8 to 10, you can really bring on some major mojo.

Anyway, let’s look at Cadmus, who will grow soon to 330 points.

I’m not sure I’d change much here. The biggest thing that I’ve found is in the Move stat, where more is better. Being the last one to the fight, or being unable to reposition yourself quickly, is a real drag. Especially when faced with fellow compatriots who can act at range or fly.

Some of these stats aren’t precisely accurate, but by and large, this isn’t a bad set. Will-14 has been a real blessing (so to speak), and the only other thing I might recommend here is more Perception. I’ve found the same thing in Pathfinder, but you can never really have too much Perception. Also, my previous analysis of HT suggests that there are real benefits to HT 13 or 14.

Points gained/needed: Maybe 20 between Per and HT. I could potentially trade the 15-20 non-optimal points in skills I found below for some benefits here.

The only weakness here has really been languages, but that’s not his niche. No changes.

Combat Reflexes is worth it for the defenses alone if you intend to be on the front line – and that’s where Cadmus winds up, especially once we lost Gareth, the other heavy hitter. Thumvar, the Gargoyle Knight, is a front line all by himself at times, but if you’re going to step up, not only is CR worth it, but enhanced defenses in general are a good idea.

I make near-constant use of all of my LPs, with the possible exception of Final Rest, but at only one point, it’s great color, and makes total sense as a paladin of Pharasma, Mistress of Graves, Lady of Fate, and all around chick who hates the undead.

Everyone should look hard at getting a Named Possession. They’re just that awesome.

The only “meh” has been Judo Throw defaulting to Axe/Mace. As I’ve noted before in a few places, this just hasn’t worked for me at all. Notionally, it should be awesome. Parry with the axe, and then next turn you throw your foe to the ground, at which point either you or a second-line guy can murderize him. In practice, not so much. It’s not a BAD use of a point, but it hasn’t worked out well.

Points gained/needed: Maybe one or two points. No more, and not worth fiddling with.

Quirks: Does not put himself in the lead role willingly [-1]; Follows an escalation of force (knobbed club, hammer, axe) , kills grudgingly [-1]; Very competitive, but doesn’t start competitions [-1]; Loves to gamble [-1]; Not evangelical; helps people meet their fate, but doesn’t push or preach [-1]

Code of Honor has worked fine, and ties in with my Divine Favor. Selfless and Ritualism were fun, as has been Honesty. The quirk of escalation of force? Yeah, that hasn’t worked out. At all. But it’s only one point, so it’s not a character-changing event. It’s just not appropriate for Dungeon Fantasy, where most disagreements are settled with lethal force from the get-go.

Points gained/needed: Pick a new quirk other than force escalation.

Here’s where things get interesting. I’ve bolded the ones I’ve never made a roll against that I recall. There’s basically 20 points of more or less wasted stuff on there, and I don’t think I’d have put points in Bow if I’d have made the character before I did my analysis of useful levels of skill with ranged weapons. Throwing axes are better for the kind of thing Cadmus would be doing.

The Armoury skills might come in more handy during the long trek north over the ice that we face as the next step in our Journey. But the rest should have been traded for another level of Holy Warrior, which would have cost 12 points but given me another much-needed Destiny/Bonus Point. Those are gold.

So there are 15-20 points here that could be adjusted for better stats, or re-invested on other skills. Holy Warrior-12 is probably worth it for the Destiny Point alone.

I’ve got zero complaints about my kit. Shrivener, my Named Axe, is a thing of beauty and awesomeness. My armor could use new boots and gauntlets, but it cost me about $12,000 and was obtained fairly recently in play. DR 8 or so is great to have, and we recently came into enough money ($27K or so) that I could upgrade further if required.

The poleaxe has never seen use. Partly that’s because I couldn’t mentally justify the image of lugging a nine or ten foot pole around in some Highlander-like space. It’s a battlefield weapon, not a dungeon one. Even a dueling poleaxe (Reach 1,2 rather than 2,3) while interesting, isn’t worth the time it takes to switch weapons in most cases.

The bow? Nice, but I’m not skilled enough with it to make it worthwhile, and ST 13 is only 1d, and even with bodkin points for 1d(2) pi it’s not that impressive.

By and large, Cadmus is and remains a good character. When he gets his Righteous Fury on, he’s a credible front-line combatant, though not as optimized for mayhem as Thumvar. With some time to spare, he can bring some really useful powers to bear, especially out of combat, via his prayers.

But I probably have something like 15-20 fairly non-optimal points in skills that just don’t see much use. In a DF game, that’s really to be avoided. Lesson learned!

Going forward, some of the concepts in +Antoni Ten Monrós‘ Saintly Power-Ups will make for serious consideration. The one where you can have two learned prayers active at once? That’s serious stuff, especially if you want to do Righteous Fury and either Guide My Hand (Cadmus doesn’t have it, but it’s basically Weapon Master), which catapults you to an instant front-line meat cleaver, or something else like Protection from Evil.

10 thoughts on “Pruning the Fat: Cadmus the Warrior Saint revisited”