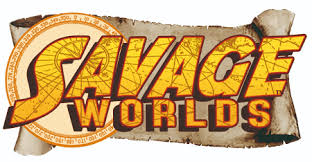 I’m curious as to what people think of Savage Worlds.

It’s one of the systems that seem to have been adopted somewhat broadly, and people say good things about it. I downloaded the 16-page Test Drive v6 and read through it.

I definitely have opinions. But . . . I’ve never played, and you can’t usually fully judge a system without playing it.

So, when I asked about it, some things that came up were:

I’d be very interested in actual play anecdotes, pro/con style feedback that’s constructive and well informed. If you think it sucks, fine – but please tell me why, and tell me where you ran into issues in actual play (or if it’s a mechanics issue that can be underpinned with math, that’s OK too).

The Responses
Most people respond on Google+ instead of commenting on the blog; no problems there. But I wanted to collect these in one place, as well. They’ll get long, so I’ll put a “below the fold” break in there for readability’s sake.

Savage Worlds is designed primarily for pulp, action movies, etc. and it’s really good at that.  It’s not so good at gritty, low-powered gaming.  It’s difficult to strip away enough of the plot armor to give PCs a more-than-minimal chance of dying.  Because of exploding dice, there’s always a non-zero chance of death, but it remains minimal even when the PCs are outclassed.

It does extremely well with situations where the PCs are supposed to be blowing through mooks with minimal (but not zero) resistance, and even more so if the PCs have a squad of good-guy mooks beside them.  It can also do enemies that are nigh-untouchably tough who you have to set up just the right situation with all the advantages on your side, plus have some good luck (or enough bennies to spend on rerolls) to be able to beat them.  It has trouble with anything in between, though, because the margin between these two extremes is rather thin.  Because of this, standard advice for Savage Worlds is not to even try to do “one big boss”-type fights – someone will get a lucky roll and one-shot him, so give the important bad guys a bunch of mooks, too.

Most importantly, it’s an inexpensive game.  If you think there’s any chance you’ll like Savage Worlds, buy a copy (or I think there’s a free quickstart version you can download) and try it for yourself.  Even though I ended up deciding that it doesn’t do what I want from my RPGs, I’m glad I tried it and I had a lot of fun in the process of determining that.  (I ran SW for about a year before finally realizing that my differences with the system were too deep to easily houserule around them.)﻿

+Charles Saeger (from the comments section)
It plays fast and has loads of options. It’s kind of a rules-lite GURPS. It has a good selection of foes in the main book, which is something SJG should have heeded. I played in a fantasy game that had converted from Labyrinth Lord (B/X retroclone) and the characters all had sweet powers fast, with good characterization. I wouldn’t go for it as my main system (obviously GURPS) or anything really serious, but it would work great for things that are fast. Star Wars springs to mind as a good fit. You don’t have a lot of tactical options, unlike GURPS; it’s kinda like D&D here. Like D&D, no defense rolls.