I’m a member of the Indie Game Developer Network. So when a member wrote that his Kickstarter was mid-swing, and a surfeit of real-life obligations prevented him from doing marketing for great justice (nod to Zero Wing). I offered to take a look at his product and review it.

The Book of Nouns

Well, yeah. The book contains about 80 different write-ups, categorized as landscapes; cities, towns, and buildings; events; people. There are twenty of each. There’s typically a full-color photograph of the thing in question, and a few pages of writeup, in 6×9 format. Every entry ends with some thoughts on how to use the idea in play.

It’s a straight-forward concept, and one might wonder if it’s needed in the age of Google? I’ll throw down an answer, which is that the world and it’s history is a vast and unruly place, and in order to search for something, you need to know it exists, or be very clever in your search terms.

This book takes some places you might or might not have heard of, people who have done great things (“terrible . . . but great,” to borrow a phrase, in some cases), cities and other events that make a place noteworthy, and then served ’em up to you as a jumping-off point for ideas.

I won’t spoil it, of course. But there are some very interesting entries in there.

Oh, megadungeons. Not real. Too fake. Too contrived. Could never exist.

Hah. Then you’re not aware of Son Doong Cave – which I was not. Five and a half miles of caves (that’s 2,900 10′ map squares, or if you do four squares to the inch for your graph paper, you’re talking something like a map that’s sixty feet long). And that’s just the linear dimention. Some of the caves are 600′ wide and (more impressively, perhaps) 450′ tall, which is enough to easily support some pretty horrifying avian threats. Like dinosaurs. Just sayin’. 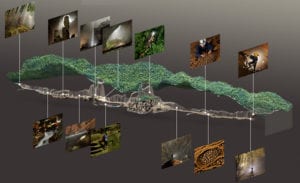 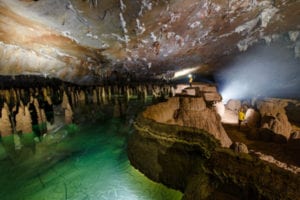 Tell me you can’t see great encounters happening in here? 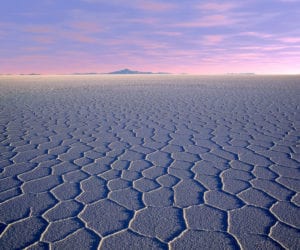 The next time someone tells you that combat never happens on a flat, featureless plain, just stage your next encounter in this location. I mean, this one is virtually marked with its own hex map. It’s God’s biggest miniature wargaming table.

More seriously, talk about an inhospitable and treacherous land. Tristan details some of the hazards and surprising liveliness of this locale, as well as noting that, well, salt is needed for life, and this is a resource. And where there are resources, there are plotlines.

A trap door under a tavern leading to an underground dungeon seem a bit farfetched? Just point out this Derinkuyu underground city in Turkey. A literal undreground maze and dug-out dwelling, it isn’t quite as extensive as the 5.5-mile cave, but would make a great location for a brief – and harrowingly confined – short series of explorations. Including a three-mile-long tunnel to a nearby also underground city fo Kaymakli.

Seriously – we’ve got your Mines of Moria right here, and they’re real.

There are three rival claimaints to the throne, and they all say they’re the long-lost son of the dead King!

Contrived, right? Only could happen on a TV show that’s jumped the shark.

Well, tell that to the three imposters who claimed to be the son of Ivan the Terrible, who in reality died young (or did he?) but here we have a succession of pretenders to the the nobility, each acting as an axis of change and chaos over a period of roughly eight years. The “Three False Dmitrys in Play” entry suggests various seeds: perhaps the PCs are following a legitmate ruler, which naturally leads to the question of the PCs either following or assuming the identity of a False Dmitry. Or perhaps there’s an undead menace, and the False Dmitry is actually an undead creature. Or . . . you get the point. Not to mention the political intrigue both real and imaginable that leads from something like this.

While I have of course seen Russel Crowe’s Gladiator (“Are you not entertained?!”), and was aware that the figures in the story were, um, loosely based on real names (certainly I’d heard of Marcus Aurelius), I had no idea that quite so many of the characters of the movie were taken from names of Lucilla’s colorful history. The story of Lucilla, enmeshed in rumor, innuendo, political and sexual scheming, would grace any soap opera, and is a model for wacky and flamboyant behavior from which you can bring your NPC aristocracy alive.

There’s a lot here, and it’s very varied. Locations range from a burning pit of hell (true!) to a far-flung astronomical object. There’s an Inuit boy living in a big city, and a modern woman who kept seducing powerful men and getting chunks (large chunks) of their wealth in something that would struck from any novel as “too cliche,” except, well, it’s real and it happened.

There are underground cities, natural dungeons, and giant temples made of mud, that need to be refreshed every year. Horrible murderers hidden in plain sight, and not hidden at all.

Again, the cliche: truth is stranger than fiction. By serving as a jumping off point for your own ideas, you can bring a real-world sensibility and feeling of depth to the realms of imagination in your games. Why just have a young, beautiful woman who may or may not be scheming on the arm of a powerful merchant, when her history could have seven such people, all divorced or (even better) murdered. Who’s the power behind the throne now? Or a (lady) pirate so successful that two separate governments would have to deal with her on equal terms? I’d say “you can’t make this stuff up,” but (a) you can, but (b) you don’t have to . . . because it really happened.

As a PDF, it’ll be easily searchable and handy. As a book, it will be about 2/3 the thickness of the Fate System Toolkit, and the author is aiming at an offset print run (see The Kickstarter, below).

For the book itself, the layout is competent and not flashy. The text will be very readable, and is written solidly and with good grammar and prose. Font choices are solid, interesting enough, and very readable.

There are only a few things for which I’d offer criticism or suggestions for improvement.

For the first, the voice of the book changes from place to place. For one entry, you might get a basic description and prose-based download of pertinent information, followed by suggestions of how it works in play. A different entry reads like a pulp action novel (I say this in a nice way), with phrases designed to catch the emotions and stir imagination. One is not superior to the other, but their juxtaposition was occasionally a bit jarring. On the other hand, it did liven things up.

The other piece is that some of the “In Play” suggestions could really be expanded on more. I play a lot of GURPS, and so I’m used to taking (say) a Chinese pirate and saying “how could we transpose this to the Wild West, or the far-flung interstellar empire?” Since the book is (usefully) systemless, one could mention how to migrate to other genres pretty easily. These sections often end with anywhere from “could fit a paragraph” to “the better part of a page” of white space, so expanding that would even be possible within the existing layout.

And one final quibble: the pagination is odd, juxtaposing the page number and the book title such that on the left it reads “218 Archive,” but on the right it’s “Archive 219,” as an example. I might slide the Archive title around and see if it fits better.

The book could also use an introduction, layout out what it’s designed to do in plain language, to serve as a bridge between the Table of Contents and the bulk of the work. 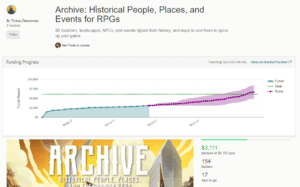 Archive – Historical People, Places, and Events for RPGs is currently in the middle of its Kickstarter campaign. This review is based on a ready to go, fully produced PDF that is already populated with internal hyperlinks. So your risk of not getting the PDF is about zero.

I was on the fence about the book until I read it. Paging through the volume is basically dipping your toe into a wealth of real-world history that will make a world come alive. The details of a dense jungle, the existence of some of these places, will allow conjuring for  your players a tangible, visceral world with enough detail that it will feel real. The NPCs created from reading the backgrounds of interesting people will be more layered, and the “surely that’s cliche” impulse can be layered with “but it actually happened that way,” or made to seem that way.

The funding goal is quite modest: just over $6,000, and it’s about halfway there. Some of the stretch goals – such as a complete re-edit of a prior volume to meet the production values of the current one – are up in the “need double the money” range, but worth chasing after. The $10 buy-in is not bad at all for the PDF (in fact, it might be a bit low, which is good for us and bad for him), and the physical copy – delivered via offset print – should be a fun thing to carry around.

Even accounting for some small flaws, the time I spent reading (and skimming in some places) the PDF already provided me with a host of ideas and jumping-off points for future adventure ideas. Having a small tome of such things to inspire new thoughts is worthwhile, and worth your consideration.