We pick up where we left off, unsurprisingly. We have all captured on the gatehouse roof, Leshar the Lizard Guy threatening to eat the hostages, the paladin ogling a set of +2 armor and being bequeathed with a vision that says we’d best get our butts to the lower levels of the tower that is currently on fire.

Well, one of the towers currently on fire.

The clergy of Mitra are chained in the bottom, and they take priority over +2 Plate. Alas.

Vognur: Sucks to be a paladin, heh heh.Mark the Paladin: Being a Paladin has its moments. This is not one of them.

So, we’ve laid siege to a castle without a goal or a plan of any sort, captured two defensible areas and set one of them on fire, and endangered the one set of people that we seem to be here to protect.

Pretty standard way to begin a session for us.

Leshar shoves the hostages to the stairway, and Mark dashes back to the main area, leaving the shiny, shiny, tasty plate armor behind.

He notes that the only way across the the tower that requires his presence is to cross the burning wall, and he sees two warriors charging across. He flings two arrows their way, missing horribly with both, but takes up station in the doorway, gaining Advantage because, as Obi-Wan says, he has the high ground.

The guys on the roof are rolling barrels of oil and water around, to extinguish things that need to be extinguished (us) and set on fire that which needs to be set on fire (them). We’ll see how that plan goes.

Leshar engages in badinage with the dead sheriff’s wife, who notes helpfully that the keep is on fire. Thanks, lady. We knew that.

The fighter on the roof, the dangerous looking one, swings at me and misses thanks to my height advantage. Keyar drills the archer behind Red Dot twice from above, incapacitating him far more effectively than my ineffectual two blows, both of which hit but roll minimum damage. Alas.

Over on the gate, our heroes try and recruit a few gate guards. One professes to be on their side – “Just give me a weapon!”

We all laugh, and switch the scene. Leshar is driving his four female hostages out through the main door, past the fire he set, which still burning merrily, has filled the rooms with smoke.

An aside: a very persistent robin is trying to fly through my closed window. And LO! It is distracting as hell.

A different archer looses at Keyar, which nearly hits but clatters off the battlement. 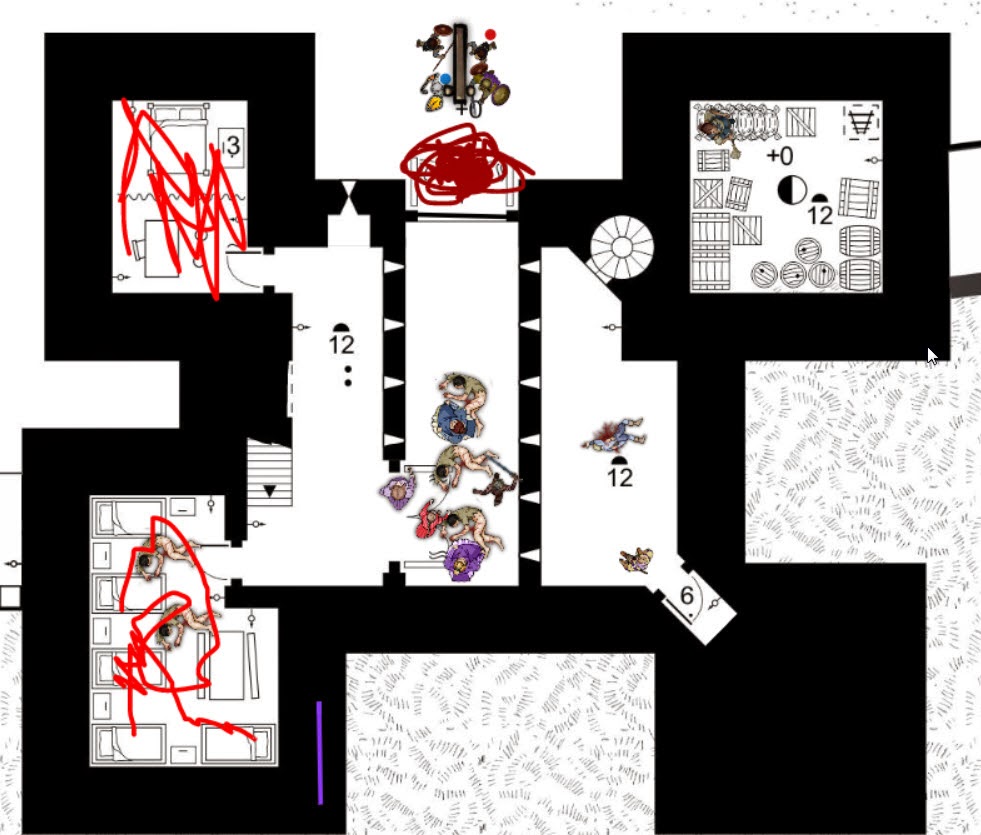 Mark and Red Dot try and shove each other ineffectually. If I can push him into the wall area, Keyar will drill him from above. If he can push me out of the way, I lose advantage. Actually pretty dramatic.

Keyar shoots twice at an archer in view, and does “Colossus damage” for having hit this guy before; he goes down. Two foes in two rounds. Thus far he’s our most effective fighter I think.

Vognur sets an area in front of the keep entrance on fire, which defeats the batttering ram but traps Leshar and the women inside.

We are probably all deeply screwed at this point.

Over on the gatehouse, Carmina casts Zone of Truth, and surprisingly enough Mr. Give-me-a-weapon is actually telling the truth. He’s an honest-to-Mitra follower.

Red Dot pushes at Mark, and wins the Athletic Check despite being disadvantaged, pushing Mark into the room; two attacks from Mark bounce off his armor. Rolling very poorly today. “Allies to me,” Mark shouts again.

Keyar and Vognur both head to the trap door, having lost sight of any viable foes.

Leshar continues to menace the women, but we note that since he hasn’t eaten anyone yet, he’s technically on super-polite diplomatic behavior. The bravest one among the hostages is still the 5yo girl, who will gladly, in ten or fifteen years, turn Leshar into a purse or some boots.

Post-game commentary: She’s going to turn into Arya Montoya. “Hello. My name is Arya Montoya. You killed my father. And my brother. Prepare to die!”

He bursts through the door, hostages in tow, and growls “Meden!”

Upstairs, the melee continues; this time Mark gets in a blow for 8 slashing, while his own plate armor absorbs one hit and the second misses cleanly. Mark continues to shout and make noise – “Allies, to me!”
Another note: I keep forgetting my Paladin abilities. I also forget when the last time we got a short rest was.
Up at the gatehouse, Carmina considers preaching:

The melee continues, with two blows thrown, one ringing off Mark’s plate. The foe looks frustrated. I can live with this.

Leshar demands surrender from Medin (the Sheriff’s son) and his local followers. He has advantage, but rolls 11/12. Meden rolls 13. Meden and two knights and some warriors yell “Attack him!” and charge.

Four misses later, Leshar uses one of his battle master dice to Riposte. Rob notes that he can still use Ripose whenever he wants, just not spend dice on it.

Leshar hits for 23 HP of damage on his riposte. Mark, too, hits and invokes a spell slot from his paladinhood, delivering also 23 HP of damage. His foe staggers.

Keyar and Vognur rush into view; Keyar misses with two arrows, but Vognur uses Magic Missile and brings him down!

Carmina and Aevin continue their spontaneous recruiting expedition. There’s actually much confusion down in the main area of the castle, as people’s loyalty wavers. The sheriff is dead; the Mitrans are on the move, I don’t get paid enough for this crap, etc.

The knights press their attacks on Leshar, who suffers two hits. totalling 16 HP.

Things actually become too complex for the first time in three adventures, and we roll initiative to establish a fighting order.

Aevin fires another crossbow bolt at the ‘yellow knight,’ with the potential benefit of the ‘Guidance’ spell from Carmina. He’s recruited a few folks to load crossbows for him, so the rate of fire is pretty impressive.

Mark dashes across to the trap door, ready to head below to the Mitran priests.

Leshar drops his yellow foe; and when another one of his foes back away, he gets but misses an attack of opportunity. 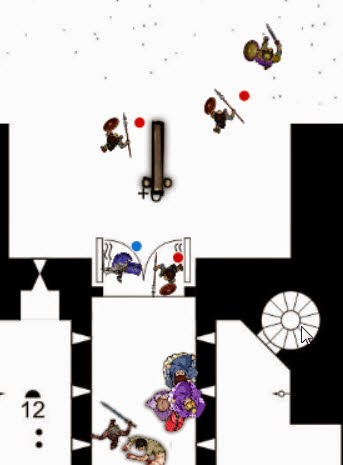 Arrows and quarrels rain down on Leshar, one hits for 6 HP. Meden and a spearman rush Leshar. One hits for 11 HP. But they did miss some, so he gets a riposte, which he does for 18 HP.

Aevin lets loose with a knightkiller crossbow, which is +4 to hit and 5d4 damage, and strikes home for 14 HP.

Vognur dashes down past Mark, and heads into the lower level, finding a pair of cells. Mark follows, and sees two cells.

Keyar shoots at a couple of guys, and hits at least once. Very chaotic, the battle thus far.

Leshar backs up, and herds the women into a corner.

Morale checks on our foes’ parts are made and failed disasterously. Meden and his spearman are the only two reacting effectively. The first attack misses, and Leshar fails his riposte. The second attack hits for 11 HP, bringing Leshar down to only 7 HP left.

Down in the jail/torture chamber, we pop the bars on the jail cells, and inside are a bishop and deacon of Mitra.

Come with me if you want to live . . . a life of pious contemplation. Otherwise, you can burn. No, that’s not a metaphor. The building is on fire.

We grab them and help them upstairs.

Now we all start to run around like keystone cops, seeking to re-position.

Leshar grapples at Meden with his sword, who rolls a 21 on his Athletics check, while Leshar rolls 15. Meden attacks Leshar, misses, and he tries a riposte, which also misses. 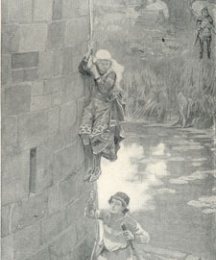 Up on the wall, we lower the priests to the outside of the castle wall; Vognur lowers, Mark is on guard duty to ensure no one shoots or stabs us in the back.

Team Paladin continues to fight and do some harm to our foes. A failed grapple but successful riposte later, Leshar staggers Meden with a blow of 11 HP.

Mark descends with the two priests, and tells them that they need to get to a safe place – and he intend to escort them both there. Thus splitting the party even more, but I figure the High Lord Veritas would not have rung my spiritual bell if they didn’t have something important to tell us. So much for the +2 armor. That bites, but mission before reward.

Keyar goes to rescue some of the civilians we left trapped in the burning tower. He gets the trapped ladies out of their pits and confinements, and leads them through the burning hall. 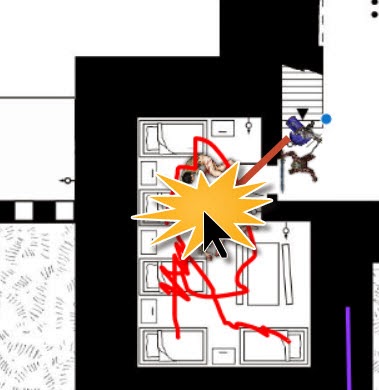 Leshar finally successfully grapples Meden, and carries him over to the fire; Meden tries to break free (rolls 16), but fails (Leshar rolls 18!). Leshar tosses him into the fire to burn.

Meden and his father, now down. And Leshar exits the building (note this happens over several rounds, but is consolidated because, well, damn – chaotic).

Vognur: The apple never dies far from the tree.

See?! He KNEW that fire would come in handy, and that’s why he set it. Providential.

Aevin sees a target and shoots with both heavy and light crossbows in turn, dropping his target.

Right now, most of the remaining castle defenders are confused and demoralized. Some are protecting the noble ladies, some are just hiding.

Keyar takes a brief moment to loot, scoring some silver.

And that is the end of combat! We managed to survive our mini castle siege, take out most of the opposition and mostly use the keep to our advantage, able to concentrate our attacks on few foes.

Now we just need to fear reprisals from the overlord, the duke, and his dragon. On the flip side, we picked up two medium infantry and a light infantrymen as men-at-arms.

Experience are tallied, and we get 950 XP, which is a good haul. The opposition holds one tower still, and who knows who’s coming from the town. But for now, a brief respite.

And to top it off: Vognur notes we can finally deliver that Horse-Lord’s armor to the house of Mitra in ransom.

We strategize a bit (and need to do even more) to try and figure out how to leverage this upset victory to our advantage.