Moving on to the Monk, a character basically designed around Kwai Chang Caine. Monks are interesting to me because they seem to get something really cool every level. They have the power of ‘ki,’ expendable energy points that aren’t quite spell slots (or rather, they’re generic power points that might as well be slots). They can use a limited selection of weapons, the class does get the extra attack feature (as opposed to Rogues, for example, that only get one attack ever), plus various ways to increase that total, usually with unarmed strikes.

The important traits for a Monk are Dexterity and Wisdom, which once again leads me down the path of the Wood Elf, which nails the +2 to DEX and +1 to WIS.

I wound up favoring WIS for my highest stat, because DEX gets the +2 – nonetheless DEX gets the second-highest raw score. After that, CON, because the temptation to try life out as a front-line brawler is going to be high. The low stat went to CHA, since it doesn’t do much for me. The stat advance at 4th went to DEX and CON evenly . . . but you’ll note that there are lots of odd scores that woudl benefit from the next advance – STR is a good one, giving the benefit of a damage bonus. In fact, since you only really need that +1, any Feat that gives an optional boost to STR would be a great choice at next opportunity.

Saving throws are STR and DEX . . . another reason to pick up that STR-bonus-boosting Feat when allowed. Athlete, Light or Moderately Armored might be interesting, but you have to watch the impact on AC – you might well lose more than you gain, given the natural AC of 18 with the statistics above, and Tavern Brawler – the grapple bonus might be interesting.
The +7 to DEX saves will come in right handy for diving out of the way of a lot of different combat spells.

If we say that +9-10 is fantastic, +6-8 is superior, +4-5 is good, and +1-3 is meh, then the Monk here isn’t fantastic at anything, but is superior at Acrobatics, Insight, and Perception, and good at Animal Handling, Athletics, Medicine, Religion, Slight of Hand, Stealth, and Survival. Meh at everything else.
His passive perception is 17, which is darn nice, and he also has 60′ Darkvision.
Common, Elvish, and two other languages.
Combat
Nice armor class, but poor hit points relative to characters that can afford to put their second-highest stat as CON – both the Cleric and Druid overtop him by a fair margin. He’s somewhat restricted in weapons used, but because he’s an elf, he is proficient with long and short swords, and long and short bows, in addition to simple weapons by virtue of being a Monk.
He gets an unarmed strike a a bonus action if he hits with an unarmed strike or monk weapon – alas that’s specific, and not broadened to include long swords by virtue of his race.
He’s got some good choices for weapons, especially since he won’t be burdened with a shield.
Options include:
Ki Powered

The monk gets extra fun from spending ki points, both general class features as well as by choosing the Monastic Tradition. This particular build has 6 ki points, which refresh every short rest. So better than spell slots.
Some non-spendy powers come along as well. His unarmed strikes count as magical for resistance and immunity purposes. When not wearing armor or a shield (as he is not), is speed increases, and between Wood Elf and Unarmored Movement his movement rate is 50′ – a large increase over “baseline.”  Further, he can use his reaction to reduce falling damage, which is pretty sweet.
Cool stuff includes
Monastic Tradition Feature (Disciple of the Elements) 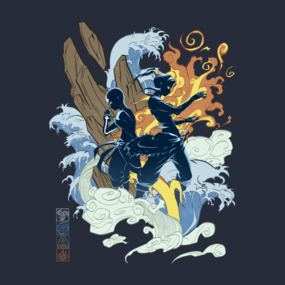 Here’s the complete list of stuff output by the ForgedAnvil sheet.
RACE: Wood Elf
• +2 Dexterity, +1 Wisdom
• Size: Medium
• Speed: 30ft
• Darkvision 60ft
• Keen Senses: proficiency in the Perception skill
• Fey Ancestry: advantage on saving throws against being
charmed, magic cannot put you to sleep
• Trance: do not sleep but meditate deeply, remaining
semiconscious, for 4 hours a day
• Elf Weapon Training: proficiency with longsword,
shortsword, shortbow and longbow
• Fleet of Foot: base movement increased to 35 feet
• Mask of the Wild: attempt to hide when lightly obscured by
foilage, heavy rain, falling snow, mist, etc
• Languages: Common, Elvish
BACKGROUND: Acolyte
• Feature: Shelter of the Faithful As an acolyte, you
command the respect of those who share your faith, and you can perform the
religious ceremonies of your deity.
• Skills: Insight, Religion
• Tools: none
• Languages: Two of your choice
CLASS: Monk
• Armor: none
• Weapons: Simple weapons, short sword
• Tools: Choose one type of artisan’s tools or one musical
instrument
• Saves: Strength, Dexterity
• Skills: Choose 2 from Acrobatics, Athletics, History,
Insight, Religion and Stealth
• Unarmored Defense (AC 18)
• Martial Arts When you use the Attack action with an
unarmed strike or a monk weapon on your turn, you can make one unarmed strike
as a bonus action
• Ki (6 points – DC 17)
– Flurry of Blows Spend 1 ki point
immediately after taking the Attack action to make two unarmed strikes as a
bonus action.
– Patient Defense Spend 1 ki point
to take the Dodge action as a bonus action.
– Step of the Wind Spend 1 ki point
to take the Disengage or Dash action as a bonus action, and your jump distance
is doubled for the turn
– Deflect Missiles Use your
reaction to deflect or catch a missile when hit by a ranged weapon, the damage
is reduced by 1d10+10. If damage is reduced to 0 and the missile is small
enough for one hand and you have at least one hand free, you catch the weapon
or ammunition. If you catch the missile in this way you can: Spend 1 ki point to
make a ranged attack (20/60ft, proficient) using it as part of the same
reaction
– Stunning Strike Spend 1 ki point
on a hit to attempt a stunning strike. The target must succeed on a
Constitution saving throw or be stunned until the end of your next turn
– Ki-Empowered Strikes Unarmed
strikes count as magical for overcoming resistance and immunity to nonmagical
attacks and damage
• Unarmored Movement Your speed increases by 15ft while
wearing no armor or wielding a shield
• Monastic Tradition (Way of the Four Elements)
• Monastic Tradition Feature (Disciple of the Elements) –
Elemental Disciplines 3rd Elemental Attunement Use your action to briefly
control elemental forces nearby, choose one of the following effects:
• Create a harmless, instantaneous sensory effect related to
air, earth, fire, or water, such as a shower of sparks, a puff of wind, a spray
of light mist, or a gentle rumbling of stone
• Instantaneously light or snuff out a candle, a torch, or a
small campfire
• Chill or warm up to 1 pound of nonliving material for up
to 1 hour
• Cause earth, fire, water, or mist that can fit within a 1
ft cube to shape itself into a crude form you designate for 1 min
3rd Fist of
Unbroken Air Spend 2 ki points as an action and choose a creature within 30 ft.
It makes a Strength save and takes 3d10 bludgeoning damage on a fail, plus an
extra 1d10 bludgeoning damage for each additional ki point spent, and you can
push it up to 20ft away from you and knock it prone or takes half as much
damage, and is not pushed or knock it prone on a success
6th Water Whip Spend 2
ki points as an action to create a whip of water that shoves and pulls a
creature to unbalance it. A creature you can see that is within 30 feet must
make a Dexterity save. On a failed save, it takes 3d10 bludgeoning damage, plus
an extra 1d10 bludgeoning damage for each additional ki point you spend, and
you can either knock it prone or pull it up to 25 feet closer to you. On a
successful save, the creature takes half as much damage, and you don’t pull it
or knock it prone
• Slow Fall Use your reaction when you fall to reduce any
falling damage by 30
• Ability Score Improvement / Feat: Level 4
• Extra Attack
ABILITY SCORE IMPROVEMENT & FEATS
• Ability Score Improvement – Level 4 – Increase one ability
score of your choice by 2, or increase two ability scores of your choice by 1
Parting Shot

While perhaps hampered by his low hit points, the Monk remains a powerful combatant, largely by virtue of the tricks he has up his sleeve. He’s a dangerous guy to throw or shoot mundane weapons at, since he might catch your arrow or sling stone or hand axe and throw it back at you for free (“It’s all in the reflexes.”).
As a melee fighter with, say, a quarterstaff, he’s actually capable of dishing out 4-12 HP of damage per attack, plus another 5-10 for an unarmed strike every turn, each attack at 1d20+7. So 13-34 per turn without any special powers.
By spending ki points, he can get darn interesting. 1 ki point will increase to four attacks (two quarterstaff, two unarmed) for 18-44 HP on those turns.
If he spends 3 ki points, he can dish out 4d10 bludgeoning damage (2d10 if the victim saves), and either push or pull him, with a potential to knock the foe prone. Depending on if your foe favors STR or DEX, you can tailor the response. That’s a wide variety (4-40) and of limited number of uses relative to the four attacks option.
The three attacks option compares reasonably well even with the Fighter/Champion (13-34 HP at 1d20+7 for the Monk, 20-40 at 1d20+8 for the Fighter), so the Monk will definitely contribute. He’s got a limited ki-based ranged capability with his Water Whip and Fist of Unbroken Air to 30′, and a much longer capability with a longbow – two attacks at a distance is nothing to sneeze at, and could potentially be enhanced by Feats. DEX 18 always makes for nice archers, and he’s proficient.
His armor class can only really be improved by magic at this point, and it will take a while to get the boosts to DEX and WIS that could take his base AC to 20. He’s fast, though – he can nearly keep up with a warhorse on foot.
As with some of the other characters, trying to make the Monk into a straight-up combatant is probably a good way to make a second-class fighter rather than front-line. Since the basic “hit him with my stick” features are quite good, the Elemental pathway (chosen because it has some strong damage-dealing ki abilities in there – fire off a blow that uses 6 ki points at once and you can do 7d10 damage if the foe fails to save. Once.) might not be the most interesting. The Open Hand discipline allows a successful unarmed strike to knock a foe prone, away, or unable to take reactions. The Way of Shadow has some truly cool movement, stealth, and illusion capabilities, and swapping out Stealth (to +7) for Acrobatics or Athletics would be a good choice here.