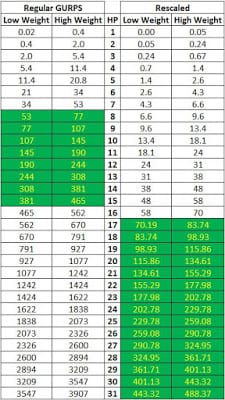 As as was driving in to work, I was thinking about the relationship between ST, HP, and damage. One of the potential solutions people have talked about to bring fisticuff damage, especially swing damage, in line with firearms has been to double HP and DR scores, add a (2) to all pi damage, and call it a day.

It’s really just a realization that one of the impacts of having reasonable HP and mass relationships is that doubling the HP that a character has very, very much widens the range of HP scores that are game-relevant.

If you look at most humanoids in most games (not all games, and not all humanoids, of course. This is GURPS) they’ll tend to run from the 80-400 lb range.

Andre the Giant clocked in at 500-650 lbs, depending on the source. So there’s an argument for going even higher.

William “The Refrigerator” Perry, an American Pro Football player, was 335-385 lbs, but could dunk a basketball and ran a 100-yd dash in about 11 sec (Sprint Move 9, or regular Move 7.5). This is more in line with a “professional” GURPS adventurer.

I like that this carries with it the potential for more differentiation in a lot of things. Characters are the heart of the game, and from a “what makes for a sensible HP number for various folks” perspective, having a wider range of useful values is good.

It would provide more differentiation using The Deadly Spring for bows, too, so that you don’t have to get crazy-town increases in draw weight to increase bow penetration by a point (assuming you don’t also give arrows pi damage, which I would not), since the resolution is higher.

This isn’t something I’d just go do if I started a game tomorrow. But I couldn’t help notice that the increased resolution when translating weight (and Basic Lift, a topic of recent interest) to HP was pretty friendly.