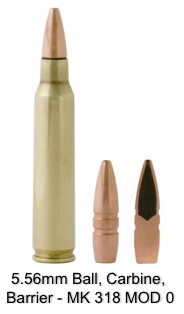 The Reloading Press is going to be a new short feature for me in 2016, based on a few comments from friends of mine in other media.

Each post will contain a cartridge and stats for GURPS – sort of. The way I’ll be doing this is to use my ballistics calculator, which will give gameable and consistent stats.

In many cases, there won’t be much difference between various versions of a bullet or cartridge. As an example, at some point I’ll compare 115gr ,124gr, and 147gr 9mm ammunition. That will, within GURPS’ resolution, likely not amount to much.

The ammo is built to a 2 MoA standard, which means that the maximum accuracy a weapon can get using this ammo is Acc 5 (about 1.8 MoA, close enough).

Pertinent stats for the ballistic calculator:

As designed, the 14″ barrel produces about 5d damage. We’ll see how that changes as a function of barrel length.
1/2 D: 406 yds  – The range at which drag slows the bullet to half the velocity at the muzzle. This is a function of bullet construction and not barrel length or initial velocity using my model.

Performance as a function of Barrel Length

The minimum penetration for this round out of a 4″ (102mm) barrel is about 3d. So we’ll start there, going up in barrel length and velocity.

The Mk318 can be fired out of pretty much any weapon chambered in 5.56x45mm – which means every M16, M4, Steyr AUG, L85, and too many variants of standard military rifles to count. Unlike the more specialized rechamberings required for other ammunition, this one is just buy it, load it, and shoot it.This was the first round treated in this manner, but more will come. I will definitely do my personal favorite, the 6.8x43mm SPC, and also the 6.5 Grendel, plus some more pistol and rifle rounds. I’ll definitely take requests!