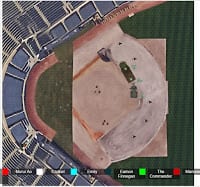 The Rat Queen and Zephyr were out at a train station in The Bronx, dealing with a bunch of bikers running around shootin’ folks, just like we were.
We are zipping towards Yankee Stadium at 280mph, which is likely faster than the bad guys thought we could be there. Marionette is right outside the stadium, fully kitted out. Most unusually, there are no security guards stationed where they should be.
We also hear gunfire going on inside the stadium. It’s almost like the GM was trying to get us inside without planning. 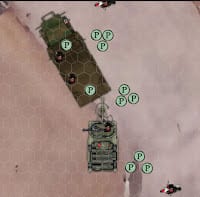 Nonetheless, The Commander has Foresight, so he lays out the conditions to invoke any attempts to use knowledge of our powers against us.
In the middle of the baseball diamond, we see a 2.5-ton truck and a trailer with a heavy-duty machinegun and some sort of high-tech device on it. The bikers look like they know what they’re doing – they’ve drilled and trained with their AK-47s, and are wearing expensive tactical gear.
There’s no magic on the field – but there are some shambling critters in the middle of the baseball diamond. 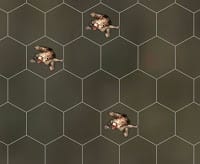 The diversionary fire was caused by well-cared-for AKs with APDS ammo. The air smells weird, like ozone or an electrical charge, too.
First priority (set by The Commander after no small amount of chaos) is to evac the prisoners (tokens labeled P). Of the 11 prisoners, four get TK lifted to the dugout and hopefully relative safety.
Some of the bikers immediately and with no hesitation start returning fire – Marionette’s stuffed bear (don’t ask) gets blasted in the head by an APDS round.
The tactical situation changes rapidly, as the bikers all go from zero to prepared almost instantly. The Commander drills the guy behind the machinegun in the throat, with a single, well-aimed shot, but the guy goes berserk, and seems unaffected. Hrm. Looks like we need to kill these guys outright.
Ezekiel, who’s a bow-master, shoots three zombies with his bow. One to the torso, one to the head, one to the leg, just to get some rec0n-by-fire done. The shot to the torso irritates the first zombie, who starts frothing at the mouth. The head shot is a crit (good time to crit) with a solid damage roll, and the last to the leg is not quite as good. The head shot goes down hard; the other two just froth.
OK – the zombies seem like zombified bikers, but while robust, they don’t seem to explode or anything. That brings Zephyr and The Rat Queen into the fray. Zephyr goes after the guy that looks like a leader, trying to take him out of the battle with a skull blow.
The Rat Queen crits her summon rats roll, and becomes a maximum-size Rat Ogre in one turn. Rat Queen Smash.
The chief bad guy (Rothgar) was Waiting, and hacks at Zephyr with a -8 deceptive attack (!). The Commander spends a karma point to ensure he doesn’t get cut in half. And yet there are six more attacks coming at him. He blows four karma to change hits to misses, and makes two rolls on his own merit.
Zephyr continues on, hitting two bikers in the back of the head as he goes by. He hits them hard and fast enough they don’t get a chance to berserk. Down and out, then.
That guy in the center was able to absorb -16 in deceptive attack. This guy’s bad-ass. Area effect for him, I think.
Eamon stunts his TK for range, spends FP for area effect and range, and spends 4 FP total to remove three more prisoners from the combat zone.
Marionette reaches for the last of the prisoners, and gets them to safety. That clears the field for pretty much unrestricted warfare. The Commander gives the word: take your best shots.
Zephyr goes to stick his staff into the wheels of some of the bikers, spoking them. Go go gadget Deadpool. He crits. The bike goes flying, and naturally explodes. The guy on the bike takes 44 points of damage to the neck. Ouchie.
Rothgar – the big bad – runs after Zephyr, attempting to slam into him. Zephyr sidesteps and goes for the Acrobatic Dodge. Which he crits. He overruns, rotates in place, and skids to a stop.

One of the zombies gets turned into a puddle of goo by a blast from the teddy bear.
Someone from the truck is shooting at Zephyr; he dodges and drops. Another tries to run him over with his motorcycle; he dodges. And another. Dodges again. 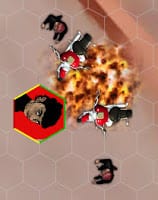 A couple bikers try and run over The Rat Queen. Given she has damage reduction and damage resistance, and pops some Fatigue to get the ST for the slam contest. She’s become a wall to them. Isaac Newton says frak you.
Her 45 HP x the foe’s speed gives 14d collision damage on THEM. Ouch. That was a terrible, terrible plan. She does 3x his damage, so they get splattered pretty hard. But she’s got DR 20 plus the super suit, and then damage reduction. She just takes it.
The machinegun shooter trains fire on The Rat Queen and Zephyr with a minigun, and hits them 10 and 14 times, respectively, and the die roll was a critical success too. That’s 252 points of damage to Zephyr. He spends character points to turn a crit into a hit, which allows him to roll defense; I throw in a second reroll, and he dodged all but two, but he burned through karma and character points to not die.
The Rat Queen gets shot 10 times; she’s got very high DR and damage reduction, and dodges a bit but takes no damage because of it.
AK guys open up on the people in the open, to no effect.
Yukio’s turn comes around. He does bad things to Zombies. The Commander switches to his super-explosive rounds, and fires off three rounds on the minigun. There’s a force field over the mad science . . . but I slagged the gun completely, even through the field. Worth spending my foresight to take out the gun rather.
Ezekiel shoots at three zombies; one dodges, and two bite it. The Zombies call out “Ea-monn . . . ” in a grunty voice. “Huh, so THAT was the outbreak endgame.”
Now what does that mean?
The Rat Queen is up to ST 70 or so, and so she chucks two flaming motorcycles at Mr Cuisinart after grabbing the only nearby mook.
The second motorcycle crits. Rothgar easily dodges the first, but that crit. 8d+18 crushing motorcycle damage, for 48 points. He power stunts his damage reduction, but even with that he gets knocked back and takes some damage. And another flaming motorcycle explosion. 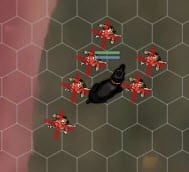 Eamon shouts out – “these are extremely viral and don’t let them bite you!” He gravity-sledged all but Yukio.
Oh, crap. Yukio’s in deep trouble, since he’s facing down six zombies . . . well, four now.
Zephyr jumps up (Acro Stand) and steps over away from flaming Cuisinart dude.
A stuffed bear gets buffed and kills a lot of zombies.
The Commander fires three “special” bullet at Mr Cuisinart. He spends doom to dodge and drop. Three shots go off into the force field, turn the guy inside to gazpacho, and maybe do something to the inside of the equipment.

Note: that was supposed to be against the guy’s hex, not his head. So next turn mr Dodge-and-Drop is going to get it hard, I hope.

Ezekiel uses a fusion-powered chainsaw (with noise loud enough to be problematic to 400 feet) and turns a near-zombie into paste.
Someone has dumped 254 points into Emily’s character as some sort of buff (things are very chaotic online, and the game is hard to follow at this point), which boosts her to Super ST 11. She tries to area-attack squash Mr Cuisinart, and she spends 2 karma – twice –  to make it a crit. ST 170+ and claws with armor divisor (2). Cuisinart spends lots of doom to increase his damage reduction.

She rolls twice on the critical hit table. The last karma goes to rolling three times on the crit table, and any hit is a major wound. Rolls 18d+54 damage, armor divisor 2. Twice.
First roll is 110, second is 116. CUT. He’s still alive, though, between damage reduction and HT rolls.
Eamon gravity sledges the remaining zombies into pulp.
Zephyr burns fatigue and HP to do hundred-handed strikes against two of the bikers – he does not care for getting shot. He slags both of them. Then takes out the last two on the truck with the same method.
The GM calls for a ST roll from The Rat Queen. How often do you get to say this? She made it by 163.