+Mark Langsdorf has an armor design system on his blog that is geared towards Dungeon Fantasy levels of cool. Good armor to match the very high damages that heroes can dish out.

Chatting with +Nathan Joy, who has played and GM’d with both Mark and myself in various games, he noted that it would be nice if Mark’s system produced a bit lower DR for the weight.

I took a peek at Low-Tech, and that book lists DR 4 “fine mail” – the prototypical and historical value for DR for this type of armor in GURPS – as 15 lbs for just the torso. That means that covering yourself head-to-toe in DR4 mail would be about 46 lbs.

That’s about 11.5 lbs per point of DR, compared to the 6 lbs per point in Mark’s table (which, by the way, is formatted more sensibly as ‘a full suit,’ rather than making a full suit 305% of the armor value in the table as in Low-Tech).

So what if we doubled all the values? That doesn’t quite mesh with some very nice plate armor, though that might depend on how much DR it really had. Some breastplates were 3-4mm thick at the most robust part, and about half that at the thinnest. At DR 2-2.5 per mm for older steels, that’s a DR in the 6-10 range, so we benchmarked it as DR 8 weighing around 60-70 lbs. 8 lbs per point of DR seemed better and a nice value, and that was less than doubling would provide. 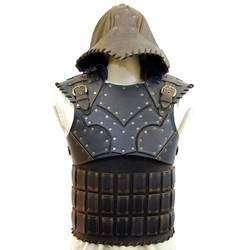 It was also a bit more than Mark would have liked (I shared this with him; he wrote BFA, after all), and so I tweaked it out a bit to match his expectations more. OK, moving on to cost, looking around, again, at plate harness, we found estimates that equated to between six to twelve months pay for a skilled laborer was what harness could cost. We pegged that at between average and comfortable wealth, or, all said and done, about ten grand for a DR 8 full suit.

That gives the modified table above, which I tweaked out to avoid nasty decimals.

By eye, this table isn’t completely insane, either, compared to Low-Tech. Cloth and Silk would be about 5.3 lbs/DR for torso only, which is in the ballpark. Cost for Textiles at DR 1 torso-only would thus be about $11. DR 4 mail, torso only is 13 lbs (LT has 15) and costs $2,300 (LT has $900). Lightweight but very expensive, befitting something that was pretty darn labor-intensive.

So again, not insane.

Looking at armor types, the natural ones are all less than $125 per point of DR. The metal ones are more expensive, with scale (small flat plates hammered out, available very early in time) costing less than the more labor-intensive mail, and still less than the finely-crafted full-plate harness.

The table leverages Mark’s excellent “keep it basically simple” “Better Fantasy Armor” rules and scales it based on some real-world benchmarks (well, as real-world as 400+ year-old data can get) to achieve something that’s at least internally self-consistent.

It can scale reasonably well, too. And if you want to find the cost for (say) casting Lighten on plate harness for 4 lbs per point of DR? Plug it into the formula, and you get a 32-lb., DR 8 harness at $91,500.

The issue you’ll run smack into here is that the Strength table gets pretty egregious about punching through armor at values that PCs have access to (and should). Lots of proprosed solutions for this, including dropping damage to a fraction of ST, as in my rescaling from very, very early in my blogging career. All of them nerf ST penetration one way or another.

What about different Tech Levels? TL4 to TL8 has a 3.25x difference in monthly pay, and materials and production methods get better. So divide, which means our DR 8 65-lb plate would be about $2,900. That is, again, not insane.

I’m sure there are issues here, but for a quick conversation, I like where it ended up . . . but since you can still swing at ST 17 for 3d with a broadsword, some method of dealing with that issue is recommended.