We pick up after we’d lost contact with one of my SEAL team – the GM decides it was the team medic, Leonard Spocke. The four PC heroes are gearing up to find and follow him, and we leave the other three SEALs, Onyx, Katana, and Saorice (Soar-sheh) are held in reserve, so they can just be late to save our bacon.

We try and figure out his last known location, Lesko’s safe house. He’d moved, and managed (with a 3) to get us a list of all of the known safehouses for all of the board of directors, but not a name association for each one. Lesko had been staying an an old automotive garage, which we go check out. There are two SUVs in the thing, fully armored and armed, and evidence that a very large vehicle went in and out of the place.

Zephyr and the Commander do ultra-sneak into the place. A surveillance system has been set up for about two days – but the system is very clean, it had been very recently scrubbed, and we have only the last two days worth of data. We also find Spocke’s cot and locker, and a magazine (one with pages, not bullets) with several dog-eared pages, which Spocke would never do. The pages are coordinates to a water filtration plant perhaps 40 miles out of town.

We decide to leave our backup (Katana, Onyx, etc) to watch the garage; Zephyr runs ahead as stealthy recon (speedster plus way stealthy), and Eamon the gravity master has to spend Karma to get we three (Zeke, The Commander, Eamon) reasonably stealthily into place. Speaking of Stealth, Zephyr makes his roll by 20. 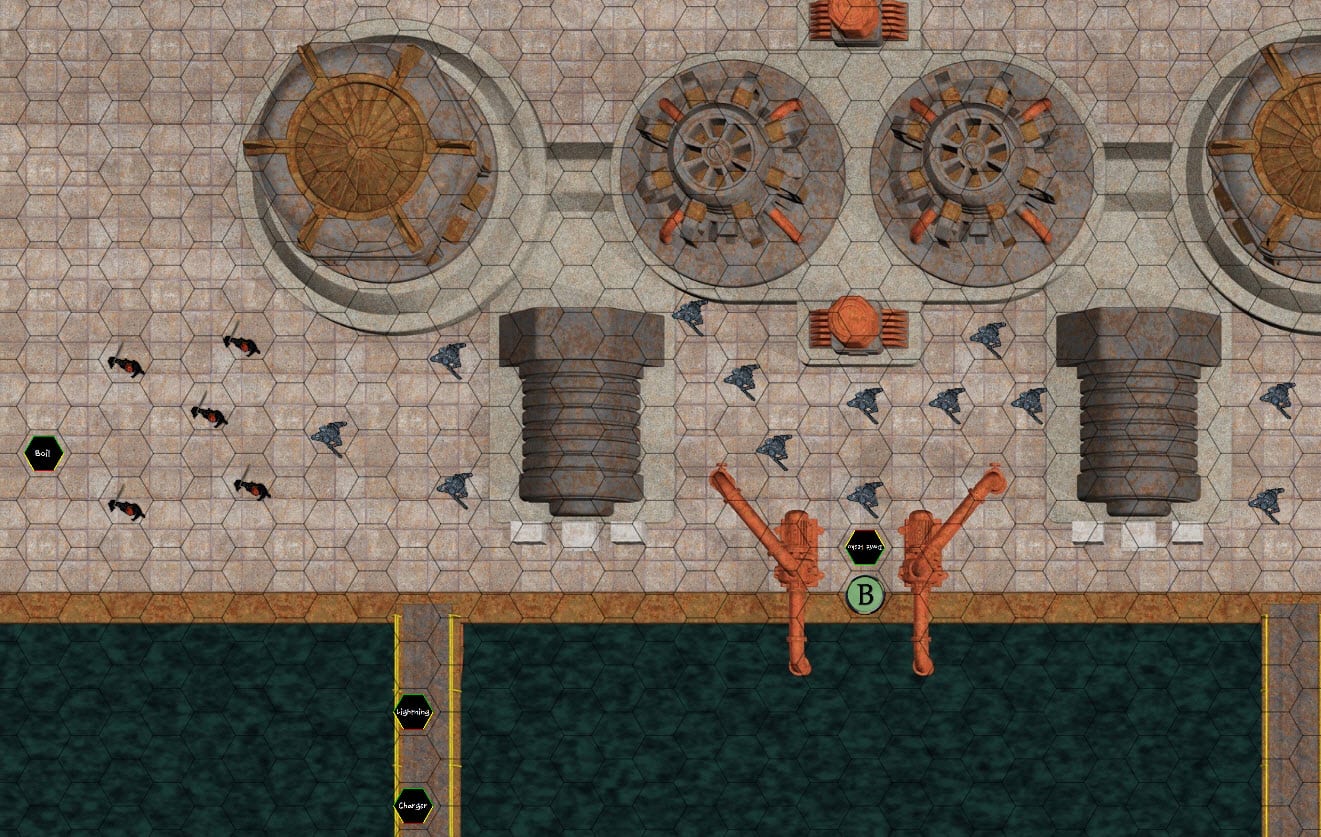 Four metahuman villains, five rent-a-thugs with machetes, and about a dozen guys that look like Blue-Skies special forces types (in the words of Albert Gibson, “and a bunch of guys with guns.”)

There is a lot of summoning going on, in ancient German. The water is glowing like a photo negative – there’s something very unnatural coming. We speculate that since they came to a wastewater treatment plant, that they’re summoning an excremental. The B? Yeah, that’s Doctor Spocke.

Zephyr wants to run up and kick the guy in the face, but . . . lots of guys with guns. That never ends well for him. So instead, he pulls a Dash, runs across the water, grabs Dr Spocke, and runs back to the group. We may start calling him Dash.

Lesko screams something unintelligible, and all the guys are on alert. Naturally Lesko is the leader and the guy doing the summoning ritual.

We go into combat mode. Zephyr tries to attack the supers on the bridge, and winds up in the water. Commander has a new set of beam weapons that are based on TK, and do crushing damage, and all sort of mods to let me do double knockback, and whatnot. A pistol with Acc 6, RoF 7, but only 12 shots, doing 7d(ish) base damage, and the rifle is 15d 28 shots, RoF 7 with Acc 12. Three shots from the pistol, but the meta called “Charger,” who absorbed a blast from another called “Lightining,” dodges three hits. Nimble little minx.

Zeke hits a bunch of normals with a tangler arrow, probably putting them out of commission. Boil, who’s basically a super with zit powers, discharges acid pus at Zephyr in the water. He turns into Aquaman and swims really fast.

Lesko sacrifices one of his other goons to complete the summoning ritual. Messy.

Eamon tries to grab charger from a distance, but he slips out of his TK, almost like he knew how to foil it. Zephyr explodes out of the water, and hits Boil with a hundred-handed strike, and knocks him right the hell out.

Charger hits Yukio in the head with a sparkly steel baton, and knocks him out. The Commander shoots Charger in the head with his brand new TK blaster rifle (15d double knockback double blunt trauma), making the roll enough to hit seven times, but the dodge reduces it to a single brain hit doing 62 points of damage. To his brain. He gets knocked out and falls into the water. (“I don’t have to save you, either!”)

That’s two down on the meta side, but one down for our side (Yukio). We’ve immobilized and the bad guys friendly fired five mooks, who are either tangled, KO’d, or both. 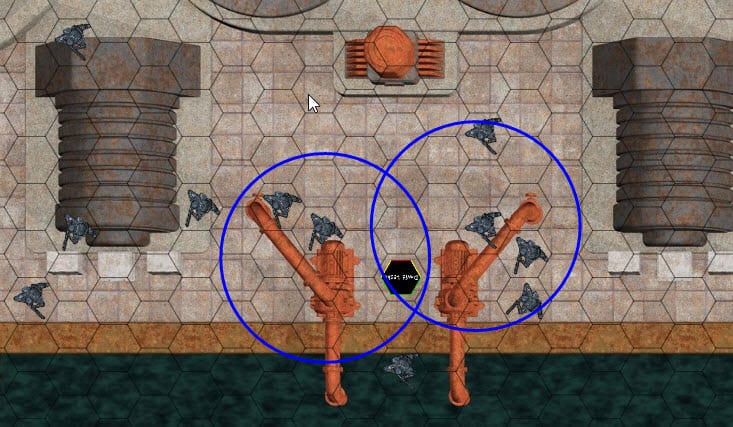 Dr. Spocke takes my pistol (he’s totally gonna shoot me in the back. Damn mind control.) Yep, he shoots me in the back of the neck. My dodge roll (thanks to Danger Sense) is not successful enough to avoid taking damage to my neck, even through my passive armor of DR 13.

Eamon lays down the gravity sledge, which hits a 9-yard radius. Earlier, and in-character, The Commander had called out the classic Avengers 2 line about “they’re lining up rather nicely,” he gets a bonus to the roll. He can basically target the entire board.

The Commander turns and knocks out Dr Spocke with a sheathed katana.

A horrible fog starts appearing, and pulling them into itself. The fog flows around Lesko, but something from the water – not the fog – grabs yet another mook, drags him into the water. He screams, and gets eaten by something in the water.

Which comes out of the water, and even the Unfazeable one has to make a fright check. We all make it, but ewwww. 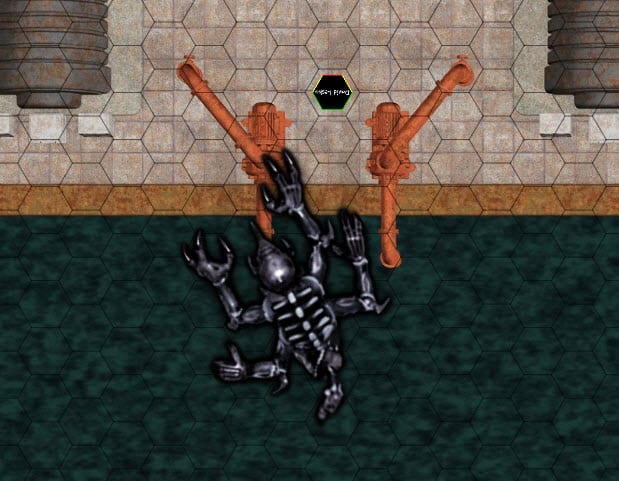 We clear the board of NPCs, and settle in for a big fight. The chief bad guy, Lesko, was avoided by the cloud, and maybe the critter. Zephyr tries to detect if there’s some sort of magical focus on Lesko or the creature that we should target. Hrm – he’s wearing some funky magical chain – evil bling.

Zephyr steals the magic-user’s magical chain. The Commander uses lots of skill for deceptive attacks for rifle, but a bad roll means he only hits once of seven shots fired. 15d doesn’t do much. We’ll see if I can hit more next time. Murui uses Thaumatology to determine the creature has strong protective and dimensional magics. Zeke hits it with an armor-piercing bunker-buster arrow . . . it shrugs it off.

The giant creep-monster tries to attack Zephyr, who tries to leap off the attack all the way to The Commander. It actually works-he puts on the bling as he flies. He winds up next to me.

Zephyr puts his hand on Ian’s ancient, magical, orichalcum katana, and tries to throw a dimensional binding on the critter. Zephyr spends 7 FP, The Commander offers up 10, 2 Karma, and Zephyr also puts in Karma.

The sword glows brighter than the sun. Blindingly, amazingly bright. The creature and fog get sucked back into the water, disappearing.

Huh. Did not expect that to work.

Lesko is still alive. We arrest him, search him, and nab a security box key, a funky looking metal disc, and a jump drive.

We agree to break there to discuss how we deal with interrogating Lesko.