Narcissism continues. We’re still on schedule for Aug 22 “printing complete” for Hall of Judgment, and I got my advance copies of Dragon Heresy from the printer. Wow, they’re amazing. 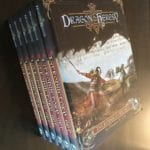 But . . . to GURPS! GURPSDay is currently pulling from 103 blogs on the roster.

Welcome to GURPSDay 2018, and its fifth year – GURPSDay started in February 2013,  a year after I started Gaming Ballistic.

We still need your help. And if you just started a GURPS blog – and I know that some of you have – email me and get on the list! With the advent of the Dungeon Fantasy RPG, Powered by GURPS, there’s even more reason to write.

gurps_20180816/HansChristian_Vortisch could not be parsed – is it empty?

Daydreams of a Dragon (Dragondog)