Notionally, the Dungeon Fantasy RPG is about, well, dungeon delving. That’s the core function it’s built to support. That said, Hall of Judgment was mostly an overland trek, with the main encounters being a ruined village and of course the Hall itself. The norðalfar lairs were legit underground dungeon-type stuff.

The Citadel at Norðvörn was a setting, completely without labyrinthine delving of any sort. I have played great games with it, and more than once. The Dungeon Fantasy RPG supports it just fine.

One of the fun things that made it into Citadel at Norðvörn was a village generator. Euan Hastie, a gamer and farmer from New Zealand, had a huge pile of research into modern and ancient farming methods and yields, and he and I worked really hard together to simplify all the data, make it sensible-enough and interesting, and present it in a way where “you wander into town” became something different for each town.

Presented below is one of several village he’s made. There will be more, posted, as this one was, to the Norðlond Sagas crowdfunding campaign as an update. 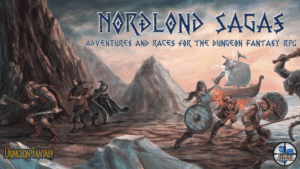 The center of Norðlond west of Konungsborg (the capitol) boasts some of the most fertile soils known to the realm. The costs of two centuries of war with the Neveri clansmen to the south have prevented the Norðlonders from fully exploiting this boon, but it is still a land of plenty.

Away from the rivers and cities, venturing into southern Norðlond, the village of Steingarður sits where the hills meet the plains. The community is well established but has become something of a backwater in recent decades. This is the type of place a wandering knight might call home. It is a community of some 750 people, with a lackluster inn and sundry support services; one can assume a strong cooperage and enough of a smithy to keep the instruments for harvesting and transporting grain in good order.

Life centers around a walled longhouse, built on the end of ridge offering a strongly defensible location and a view over the plains. A man-made channel hugs the side of the grape-covered ridge, supplying the stronghold with water. While not a towering structure the wall is well made from mortared stone. Unlike the north of Norðlond, there are few mature stands of trees; small areas of tamed and managed woods are present amongst the hedgerows and in the higher valleys. A more considered eye notes the young age of the managed woodlands, the consequences of a feud that flared up a decade back.

Goats, wine, and linen are Steingarður’s main source of money as most other goods aren’t worth the cost to transport to the river. Even so it produces the food required to keep forty of it’s soldiers – the armed levy provided by the riddar to King Krail and the Marshal – fed and supplied while they are in the field against the Neveri.

While on average the people here – many of whom are thralls – are not well armed, those who are are usually older veterans. The town boasts more than a few heirloom weapons that are kept in fully functional condition.

Aside from supporting village life, the industry of Steingarður has two purposes: feeding it’s soldiers and providing the riddar with the liquid assets required to maintain his position. The riddar is young, and has only recently assumed the role. In this case, liquid assets are rather on the nose: the two primary exports are 11,000 gallons (roughly 200 barrels, perhaps 60 tons including both barrel and wine)

So that’s Stoneyard! A winery that depends on grain and wine for sustenance, with a newbie ruler. The riddar could be a threatened ally, or a ripe plum ready for picking. The village could be something the adventurers just pass through, or perhaps they must take refuge at the village inn, which used to be a thriving place of business but has fallen on hard times.

This and more can be had at the Nordlond Sagas crowdfunding campaign, active until October 12.