We picked up from +kung fu hillbilly‘s new Pathfinder campaign with +Matt Sutton joining us (apparently he’d been there all along, but he’s a Dwarf, so we apparently never looked down).

We started to wander out to hide in a tree by the exit, only to find our way blocked by a 25-odd foot bear. An angry bear. We started to fight, and Alverior ( +Douglas Cole ) tried to back off to get more room to use his bow, provoking an attack of opportunity. The bear hit him, and he went from 8 HP down to -1 in one blow, like the good first-level practice dummy he is.

Fortunately, the party consists of two clerics, who healed Alverior up right quick. We proceeded to turn the bear into a chopped up pincushion, Kalyl hit him with a few ice balls (earning him the nickname “Snowball”), and Breg hit him with a ball of acid. Naturally, we managed to nearly completely block the hallway with it’s corpse. Oops. 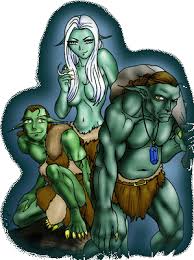 The next morning, we woke, chopped off a bear paw for evidence, and the winter witch and Kalyl ( +Jeromy French ) and Breg Stonebeard ( +Matt Sutton ) traded barbs over whether or not to allow the Goblins to come back to their cave, and then cave it in. I think Berg noted that he had an issue with a Goblin lady, who strongly resembled Kalyl. Alverior backs off to let them have their holy war.

We go back to the Goblin camp, show off our paw, get a necklace of teeth and fingerbones that is supposed to convince the humans that war is averted, and head back to the human settlement.

We showed them the evidence, got offered jobs, refused them, got a 25gp payout, and that was that.

Alverior seems to be a nice fun potential character, once he gets out of the “one-hit wonder” status that is first level.

I completely forgot to snap a screenshot of our characters all trapped behind the token of the bear, which completely filled the 10′-wide corridor. We had a wee bit of an “oh, crap, now what?” moment when we realized that killing the prey right there in the corridor might have rendered us incapable of stopping the war between goblins and humans . . . on account of a giant bear ass in the way.