+kung fu hillbilly started up a new game, both to allow our usual PF GM to play ( +Jeromy French ) as well as, well, he wanted to run a game.

I think it’s set in Golarion, but as far as I can tell, we’re not on an Adventure Path, which works for me. I like sandboxes just fine.

Jaime’s guidance was more or less “out in the wilderness, little contact with anyone, better have good survival skills.” 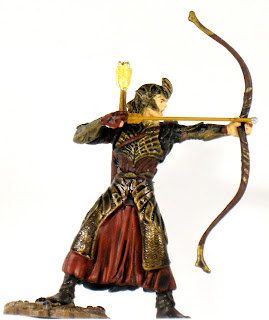 A few others had fast ideas on characters they’d like to play, leaving me a bit behind. I volunteered to “play to type” a bit, and cover a bow-using Ranger type. Then Jeromy showed me the Elven Archer template/class, and I decided that was the right mix of fighter, ranger, and rogue for what I wanted.

I had a list of stuff I wanted, Elven Curved Blade, Composite Longbow with +2 STR bonus to match my own STR 14, masterwork bowyer’s tools.

Then I rolled 150gp instead of the nearly 300 I’d have needed to complete my stuff list.

So I decided to go almost entirely the other way. I showed up in the Inn that started the adventure with a bow, a light club, two empty quivers, an empty map case, crappy leather armor, and a pretty bad mood for an elf.

I retroactively decided that he had been in a warrior training group, a handful of youngish elves in training with a master. As part of survival training, they were teleported by the Loremasters from their home to this remote, desolate, Goblin-infested area to learn to survive. Kind of a field trip.

But they showed up in the middle of a Goblin raid or camp or something, the master and all his companions were killed, and only he got away, having lost much of his gear (but not his bowyer’s tools or bow).

It made for a nice, relatively dramatic entrance.

The first game was our usual two-hour affair. We met each other, and for the start it was only Jeromy’s half-elf winter witch, and my fully elven archer, isolated in a human settlement. That made for a very interesting dynamic.

We were interrupted in our introductions by the arrival of a fairly frantic woman with many kids in tow. She said her husband was dead, and that a Goblin band had broken a 20-year peace treaty by killing him.

We were recruited to head to the place and check it out. We agreed, and headed out. When we got there, there was lots of evidence of combat, but not really of a true raid. We even found the guy, dead, laid out on his kitchen table with healing bandages all over him. Food was missing, but nothing was really burned.

We tracked the Goblins back to their camp, where an epically failed Stealth roll on my part (oops) led the Chief to come say hello. Rather than fight, we talked, and heard they’d been driven out of their caves, where they’d been living happily, by some nameless un-killable (by them) devouring beast.

I went back to report to the town captain, and found they were busily preparing for war. I told them that they were overreacting, like humans do (hey: Elf. Arrogance is in our blood, you tiny mewling human piipsqueak) and if we could spare a few warriors, we could maybe chalk this up to “oops” and have less bloodshed.

As one would expect from these reactionary children, they were unimpressed. In true elf fashion, I left the room, hopefully in an enigmatic and infuriating fashion (hey, Elf. With CHA 9). Headed back to the farm, met up with my companions, and journeyed to the Goblin cave.

We explored the internals quickly, finding very little. The session ended with us leaving the cave to hang out and lurk outside, so we didn’t get pinned in a cave somewhere.


I like sandbox campaigns, and this one felt a lot less railroady than both the Adventure Paths I’ve played in (one in GURPS, one in Pathfinder). I feel like we can do nearly anything, even though the problem in front of us is pretty obvious: find monster, get beat up a bit, find monster’s weakness, hopefully kill monster or drive him away and avoid a war.

This’ll be a good diversion from the Skull and Shackles campaign Jeromy runs, and will let me explore Elfdom (elf-hood? elfitude?) as well as seeing if the mix of fighting and spells and woodcraft that is the Elven Archer is a good mix.