When +Hans-Christian Vortisch wrote Tactical Shooting, we came up with the Minute of Angle rule, which states that the maximum skill you can have with a firearm, including all modifiers except for range and size, can’t exceed 22 + 2*Acc. This was a calculation where I looked at the typical spread of a weapon in bench-rest mode, and converted it to a round target, usually at extreme range. As it turns out, if you know the spread of a weapon, you know it’s Acc, and there’s a very straightforward correlation between the two. Acc 5, for example, is about 1.5″ of shot spread at 100 yards.

OK, so given that, how big is your burst (say, from a shotgun, where all the pellets are released at once) at any given range?

No problem. The spread can be found by taking -1* (10+2*Acc+Range Modifier) and looking that up on the Size table.

Acc 2 at 25 yards (typical benchrest accuracy for a self-defense pistol of mediocre quality)?

What does that have to do with anything?


Well, there’s a huge thread over in the SJG GURPS Forum about controlled bursts, shot spread, and all the usual stuff. As I ponder this, I think that the natural place to start is to figure out how disperse your bullets are, somehow compare that to the SM of your target, and roll to see if you hit.

Now, of course, combat isn’t about clamping a gun into a perfectly stiff and firm mount and pulling the trigger. Skill enters into it, and recoil, and motion, and . . . 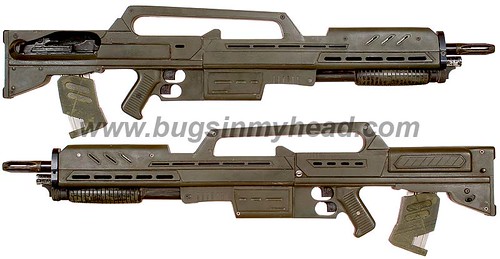 But if we abstract all of that into a degradation of skill, perhaps what we wind up with, instead of using the Rcl mechanic, is an expression for the size of the burst due the inherent spread of the weapon, plus spread due to waving the thing around (control of recoil and steadiness, or purposeful lack of steadiness, of the mount), offset by a margin of error for misplacing the centerpoint of the target. Then you might compare that number to the SM of the target, which would give you a percentage of overlap between the shot pattern and your target. That should be a fairly straight-forward table lookup, perhaps. That would give you the percentage chance to hit with any one shot, and you could then find the chance to hit with many shots by rolling 3d6.

I actually did this in excel a while ago. So if, for example, you find that your pattern overlaps your target by 35%, and you fired three shots, you hit with one shot on a 12-, two shots on 8- and all three on a 5-.

The trick is to come up with the right way to get spread and displacement from the ideal aimpoint, and convert that to a hit chance. Then it’s just math.

Would you REALLY do this in play?


Not without a computer, no. But then, that’s getting more and more common, and all of this is just easy if what you’re entering into your tablet is a skill, a weapon (for Acc), a Range, and a number of shots for the attacker, and the SM of your target region for the defender.

Figuring out where specific shots hit would be a secondary complication, but that’s actually fairly doable. I’ve done something like it in the past, with an overlay that shows (with a d12 roll, sorry) where a shot might go depending on margin of success of a shot. That really only works for single shots, though.


Finding a mechanic that is both playable and realistic is tricky. What I might try and do is invoke agency, and players could perhaps take a penalty to skill to purposefully widen or narrow (!) their shot pattern (which might increase your odds of even being able to roll a hit, or compensate for a high-recoil/high-spread gun), and then the actual die roll is for how close the center of aim is to the target. You’d still wind up with, for rapid fire, multiple die rolls (bad), but I think you’d wind up with fewer edge cases. Open up on a SM+13 battleship, you’ll hit with every shot unless you completely biff the roll. You’ll even know how far from the ideal aimpoint you diverted, and how spread out your shots were. Assuming you care.

High skill individuals might purposefully take a penalty to spread shot around (saturation fire, hoping for suppression using the Fright Check rules from Tactical Shooting) or to control the shot spread, tightening the burst. Instead of Rcl being a MoS factor, it would be an increase in spread that occurs on multiple shots as a penalty to skill. You’d have to burn skill to compensate for it, which would impact your ability to keep your center of aim where you want.

Clearly this needs more fleshing out, probably tons of issues with it, etc. But it’s a potentially viable approach to the matter. I’ll have to see where this goes.

And just for fun, here’s the Acc to MoA table, which might be useful