After the last game, the team (without me – I was out for some reason) had managed to survive the cave-in that was Pharasmically induced, do some minor looting before the entire cave system collapsed, and watch as one undead dragon flew off with a dead dragon in its claws. 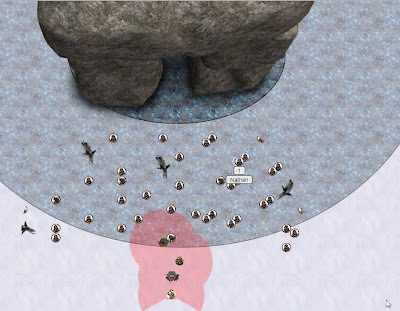 Yeah, like we won’t be seeing them again in the future.

Anyway, we pursued them across the frozen north for a few weeks, and came up at camp to a woman that stirred Thumvar’s bones. He wandered out after her into the frozen cold. The rest of us resisted the evil hag’s lure.

Still, that put us in the middle of the frozen combat field with what looked like one or two foes. I think my vision-blocking layer was disabled, because I saw the entire freakin’ mess. That is a whole lot of Frozen Dead, at least four undead mammoths, a bunch of Frozen Wraiths, and one Woman. Plus a giant-ass stone pi. Awesome, like the mooks on the receiving end of River Tam’s wrath, we were about to be killed by Evil Math.

Turns out that was somewhat literal, too. That circle was black ice. Evil black ice, and any undead on it got a +10 to resist Cadmus’ usual bag of tricks, such as Protection from Evil. We found that out when Staver (our Infernal Scout) wandered in and felt the slippery evil for itself. Very bad, very tempting. She backed out.

Anyway, wackiness ensued. The snow slowed us down to half-move, which for Cadmus was 2 yards per second. He didn’t do a lot of moving, though – they came to him. Lots of them. Things rapidly got hairy, with mammoths trying tramples (all were dodged), very fast wraiths sneaking up from behind (but they mostly fell quickly to silvered weapons), and slow undead that woke up when the entire freakin’ battlefield shivered like a drumhead. Now they were fast zombies. 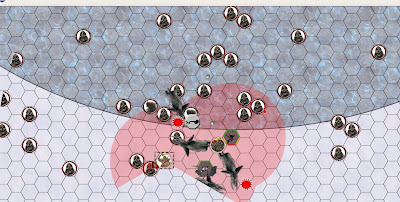 We managed to bring down most of the mammoths, and the bad guys still insisted on leaving their circle of Awesomely Evil to come to us. Still, we got pretty well surrounded. Lots of grapple attempts (alas, we are not introducing Technical Grappling midstream. Yet.)

Still, we thus far mainly are managing to hold our own. Cadmus has an attack called “Smite” that strikes undead with 2d burning injury per turn in a 4-yard radius. It’s irresistible, no roll required, just roll damage. The mammoths found it irksome, the Frozen Dead took a couple of rounds to fell, and the wraiths did not fare well against the combination of silver weapons and holy fire. Go figure.

We ended right as Cadmus was going to launch a smite attack that would impact eleven targets. Staver and Shiba are more-or-less surrounded . . . and since Staver’s an Infernal, if I get close enough to help them out, I burn Staver too. Ouch. 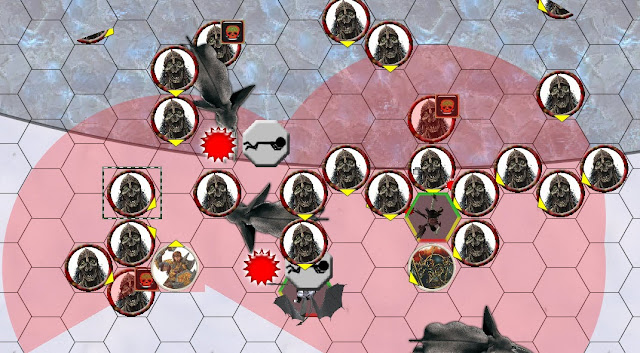