Wrapped up the first session of Alien Menace yesterday, in a special bonus session that had me forgetting to communicate with several of the players, because I used too many communication channels to do it (mail, chat, Google Groups, Google Calendar). I wanted to finish the mission, because it was only supposed to take one game, two at the outside, and instead it looked to be 3-4. Though as someone pointed out, of the maybe 8-12 hours of potential playtime, a good 2 of them were spent on technical difficulties with the interface.

Still: It was a short session other than the bullshitting.

You did not shoot that green shit at me!

When last we left our heroes, they’d flattened the two sectoids that were coming at them from either side, but had taken some successful fire (mild injuries to Colton, even through the armor) from a line of small (SM -4) drones.

The drones lined up and spread out in the middle of a cavern, and after the drones formed up,  they came straight in shooting at, well, mostly AB Karabus, +Peter V. Dell’Orto‘s character.

They only had one shot that might have hit, and AB dodged and dropped.


Offensively, and even with the new RoF rules, AB nailed at least one with full-auto fire, Enrique plugged the last one with a hit from three shots from the Barrett, and either AB or Ianali got the middle one. Enrique and Colton made good use of cover, Ianali (On the Edge) dashed across the opening, firing as he went ( +Christopher R. Rice will need to remind me if he hit his target). But in the end, the drones got knocked down by a few rounds of furious fighting.


As they caught their breath, the experienced soldiers that they were came to a conclusion: the Sectoids were definitely not warrior-types, adn the drones were likely command-driven, by a set of simple commands. They were not just drones, but likely RPVs. And they were driven by a set of commanders who either didn’t know much about tactics, or didn’t consider the PCs a threat. “Hey diddle diddle, straight up the middle” was all they had in them.

Also, in retrospect, the combatants were amateurs, and other than the cyberdisc, clearly not kitted out for battle. Oh, sure they were armed, but they fell easily to volleys of gunfire, almost like they simply hadn’t faced projectile weapons in a while. 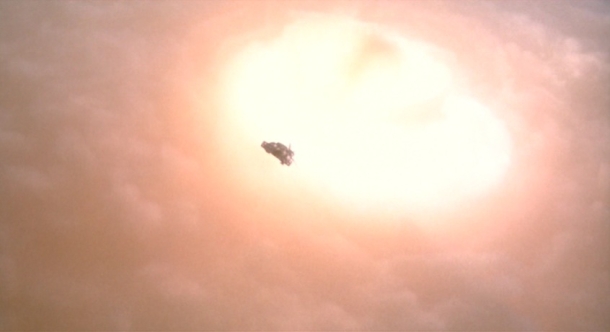 Loot the Bodies, Get the Hell Out

The landing craft then called to note an escalating energy flux and something resembling scrambled communications on the energy bands, and the funky ghostbusters detector thing the team had fixed up started to get persnickety.

The squad made the judgement to haul off a sectoid, a bunch of small drones, and managed to lever the cyberdisk onto the truck that is part of the lander loadout – I’d written it up as included in the drop-ship but didn’t mention it.

Nearly all the combat had been conducted in the first cave from the entrance, as it turned out. So it was easy to drive the APC into the cave, put a sectoid, a bunch of drones, and the cyberdisk on the truck, roll into the lander, and boost at max acceleration for the ship.


Ethan’s badly hurt, with a crippled arm and leg. He’ll be out for months, which gives time for new PCs to join.  +Jake Bernstein had steered Ethan for a game or so, but this development gives a good opportunity to introduce a new PC.

The team did pretty well with loot, though it will take a bit to turn that learning into actual cool stuff:

When all is said and done, we got some good learning out of this, plus some good fun.

All the players got 10 or 11 CP, and the opportunity to tune their existing characters to reflect play reality rather than theoretical concerns. Christopher is definitely going to leverage that.

It may be realistic as hell, but lacking any sort of arm/leg armor sucks when one hit can and will take you out of the fight. Either some sort of limb armor needs to be provided, or a magic “blue goo” that is basically an ultra-tech healing potion. It might not be “realistic,” but you can easily have a situation where a player gets tagged early on and is out of the game, effectively. That’s not fun. I think I have this one covered, actually, for next time.

It was good to have a set of enemies with simple and poor tactics to run while we were figuring out the rules we were using and playing with the interface.

We got a lot of help from +Eric hil as we played, and with a bit more work from me, I think we have something playable. I never could get the newly supplied targeting mode to work, though. It didn’t matter, but it was frustrating. The Fantasy Grounds interface is “encounters first,” rather than “map first.” To set up a fight, one sets up an encounter, then puts the tokens on the map and adds the baddies to the combat tracker. But there doesn’t seem to be a way to put a token on the map, and then add that particular token to the tracker. Or if there is, it’s external to the usual set of radial menus accessible by mouse click. That being said, the modifiers were much, much, much easier this time, and once I got the trick of it, it makes me see how with the right pre-game prep on my part, that will no longer be an impediment to the game.

The new aiming rules are good, and the new attack options are fun. I think bonuses might accrue to fast in certain situations, but we’ll see. Blazing away from the hip still seems too effective, but at least in the case we played yesterday, most of the blasting away was with stationary troops. Highly skilled (Guns-14 through Guns-17) troops with lots of electronics. The three-point sling and reflex sight is a constant +2, and RoF bonuses of +2 as well. That means that you are starting at +4 for a basic attack, and with Range and size penalties from -11 to -8 or so, that’s a net of -4 to -7, which a skilled shooter can eat pretty handily.

Armor as Dice is fast and playable . . . but it means that if you’re overmatched in armor, you will always take damage. Always. In this case, any time the troops got hit with a blast to the torso, they took 1d, and 3d to a limb. So the armor seemed pretty useless. Again, that’s somewhat realistic – and I’d lathered on armor divisors to keep wounds (relatively) light but still threaten the team for this first mission purposefully. But there’s a certain amount of tension inherent in “roll damage and see if it penetrates DR” that is usefully retained. I’ll have to think on that.

Nate made an interesting point, which was that in general there was too much discussion about movement, largely due to the game being unforgiving about being caught in the open, which troops of the quality involved would rarely be. Some good suggestions were made, some of which might be publishable, so we’ll basically say “there are probably solutions that exist that will combine Cautious Advance with some metagame currency to make it lower risk to just move the damn token and end your turn.” This will enhance speed and fun.

All in all, I’m getting better at moving the game along, and even though penalties stack a lot with firearms combat, they stack the same way every time, and are amenable to shortcuts.

That being said, not every game will be a simple tactical encounter – or even solved purely by gunfire – so there will be more to it than a wargame.

We’ll see, since if certain things don’t get in the way, we’ll play again next Saturday!