There’s an interesting discussion over on the forums about using the Slip maneuver – a retreat in the forward direction – to maneuver around your foe.

+Sean Punch provided some feedback on how this should be treated, and how when looking at a system using discrete one-second turns,  sometimes judgement must be exercised to ensure sanity.

All well and good, but as I was thinking about it, I wanted to see if one could embrace turn breaks and still preserve the same kind of feeling as Sean’s method: if you get shanked in the back, it’s because you made a choice.

Now Here’s the Situation (apologies to Will Smith) 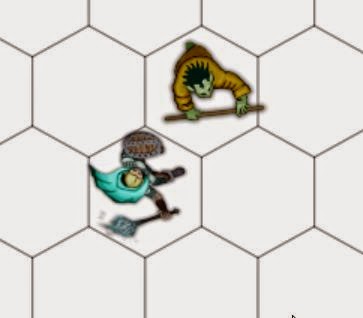 The situation described in the post is actually harder to bring about than I first thought it would be. But still, the basic situation is as follows, as an example of moving with a Step of 1. The actual case involved is a two-yard step, but we’ll take the 1-yard case first.

First, you have two foes facing off. In this case, the orc is going to attack with his foe on the right side of his front arc.

Why not turn and face? Let’s assume he can’t. Maybe there’s a foe in his front left hex that he wants to keep there. Maybe he just likes having his foes on his weapon side.

But he attacks, and the defender parries, and exercises the Slip retreat option to move closer to his foe, instead of directly back (Retreat) or back and to the side (Sideslip).

When the orc’s turn ends, the hero gets to step and change facing, which he does. 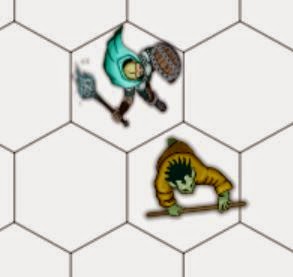 At that point, he’s technically in our staff-wielding orc’s back hex . .  but he didn’t start his turn there, and this is a classic case of a Runaround Attack, which is explicit on this matter: this maneuver is not a true attack from behind, from which there’s no defense. It’s treated as an attack from the flank/side, and is thus only at -2 to defend, rather than “you’re screwed, hope your will is up to date.”

The case where the fighter in the blue cape has a very epic Move 11 is the contributing factor here, since it gives him a step length of 2 yards. This applies to retreats as well as forward motion (I had to look that up, but it’s quite explicit on p. B377).

So this time, our defender instead of slipping to the side by one he either sideslips and then steps forward (which might not be legal, as it changes direction), or in the case of two foes face-to-face, moves through his foe. Maybe he has to evade, or he does an Acrobatic Retreat to jump over or under him.

Still, that allows, just by virtue of a defensive option, the Slip or Sideslip Retreat, for Speedy McSpeedypants to start his turn behind the orc. He can then rotate and strike.

Back Attack, or no?

In my games, I embrace the turn-by-turn nature of GURPS when I can, a lesson learned from chatting with +Peter V. Dell’Orto and playing Dungeon Fantasy with +Nathan Joy. In some of the games I played with Nate, especially, we fought huge numbers of foes. And Peter likes to remind me that that GM’s job is quite hard enough already, thanks.

So if you start your turn in someone’s back hex, you get a free shot at his back.

Now, it’s easy to see why Sean counseled as he did. A one-turn run-around is really not that much different than a two-turn runaround. You still know someone just moved around you, and to say that if it happens within one arbitrary time span vs. another can get weird.

Sean’s rule invokes player agency – always good. If you choose to leave your back to the guy, it’s on you. If you don’t have the opportunity to choose, you get some slack.

But there might be another way to go, and that’s to allow rotation at a few more spots.

Right now, in tactical combat you can change facing by any amount at the end of a move (including a step) if you use fewer than half your movement points. If you go faster, you can only change one hex-side. Sidestepping costs 2 movement points, and pivoting in place costs 2 points before or during a move, per hex-side of rotation.

I will attack, and you don’t want that

Since you can change facing by any amount during your attack, I see no reason to disallow changing facing as part of your “attack,” but in response to your enemy’s movement. If you can take a step and rotate 180 degrees and attack (which I believe you can), you should be able to step, attack, and rotate 180 degrees.

At least forgetting the attack part, the step itself allows a free pivot of arbitrary amount before or after your step (not both!). So allowing a single hex-side of rotation after an attack, or just saying “during your turn, as part of your step and attack, you may make up to three hex-sides of rotation” might curb some of the abuses. If three hexes is too many after an attack, simply allow one.

In the case of our orc fighting Speedy, when he steps through or around our Orc as part of the parry, Eric the Orc can pivot by one hex, following his motion.

Now, Speedy’s fast, and our orc will still wind up with him on his flank – but the only way Eric the Orc will wind up with Speedy in his rear hex is if he chooses to not pivot.

As part of any defense, you are allowed to rotate in place by one hex-side. You only get one retreat per turn, but in terms of rotation, have at it. This may produce many facing changes during the course of a turn.

By giving the attacker and defender increased ability to rotate in place during attacks and defenses, it makes my own simplification closer in spirit – and I think easier to execute – than Sean’s advice. Basically, if your foe begins his turn in your back hex, you’re boned and he gets a free attack at your back against which you can’t defend.

This takes the onus off both player and GM to remember what two guys might have been doing when the moves are buried within a battle that might have 30 combatants in it.

Granted, this may need some playtest to see if it’s broken, but I think at minimum, allowing a single free hex of rotation after an attack shouldn’t break anything.

Or maybe you treat an attack as costing half the total availble movement points, have a hex of rotation cost a movement point, so that if you have the movement left over to follow a defender as he tries to zip by you, you can do it. If not, guess you should have saved some movement.

On the defense, I think allowing a free pivot of one hex-side would be fun. I don’t think it would break anything, no matter how many times it’s done. But if you don’t like it, you get one step and one hex of rotation on defense per turn (so you get one retreat and one rotation).

In any case, the final rule is if you start your own turn in your foe’s back hex and stay there up to your attack is made . . . he can’t defend against it.