We picked up after a lot of time off. The last time I played, it was about five minutes and “oh, by the way, your friends managed to salvage the +2 Plate Armor,” so yay!

We are apparently saddled with a young lady and her mother as a result of some action with some mercenaries.

After Fosco and Lesharr dropped off the armor. It is the first fall month, 13 days into it. Fosco, it seems, never came back.

We wake up. This is a good start. However, I’m at an utter loss as to what to do next. A vast silence occurs as we realize that we have not a flipping clue what to do.

We review where we left off:

We had sort of tried to get out of being involved with the revolution and civil war business, and back into the realm of resisting Pan Calderax. We were trying to weaken his plans and erode his power base while trying to figure out his ultimate goals.

So Josh’s mission is taken care of, so we have some leads to look at.

The Druid Reidoth seemed a good lead. The Ranger station for the church was related. We could also head over to City-State and see if we could dig up any dirt on Herone’s folks. The dragon in Thunderstruck was a baby dragon; maybe something we could take. Hony of the Twillight Company was ‘in bed’ with the bad guys. We were looking to create a rift between Hony and the Company. Mori is a green dragon, and Pan Calderax is using Maud as leverage.

We decide to head over to chat with the Druid, since he’s local. We head over to the charcoaler, and ask to speak with him. Who sent him, we’re asked. Keyar the Ranger. Ah, yes, come, come! Reidoth has arrived.

We see a Druid eating breakfast along with a bard and the charcoal. The Druid declaims in some sort of accent, and asks us what out quest is. To defeat Pan Calderax. Yes, he’s out of our league. Can he help us in any other way? We show him our notes from Herone.

Maud’s son is back at Thundertree causing a bit of ruckus. If we could get him out of there, it’d be a good help, and we could tell him to tell his mother . . .

So, our plan is to rescue a dragon in distress and take him back to a damsel, to influence Mori . . . no, we’re rescuing a damsel in distress to bring back to a dragon. OK. Sold.

So we will head to Bryny and spend a weekend there rescuing damsels. 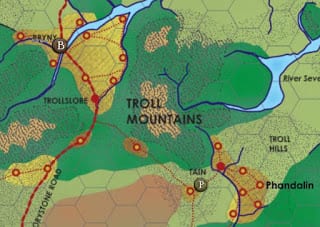 As we head out, we come across six men at arms from City-State. our new friend the Bard goes forward and is challenged by the knight. Colin McDaw is out in front, the paladin 50 yards back. Colin explains he was traveling through Tain, and we explain that that whole rebellion thing is a bad business all around (true!). They’re heading out to deal with the rebels in Tain.

We don’t kill them, and they don’t try and kill us. Progress.

As we go, we come to Norcross, led by a Therian Baron. Not sure of his name.

We see a large military camp with about 50 people in it. We arrive at a clearing, seeing a deer, which is naturally then riddled with arrows. We hear a voice saying “OK, here’s a knife; go put it out of its misery.”

We hang back (and Rob decides my magical plate does not give disadvantage on Stealth). The noble’s son (of course) shouts out “DAD! They’re rebels!”

Marcus nudges his horse into the clearing, slowly walking forward with his weapon hand empty. Carmina sits as well, hands visible, not making any hostile gestures. Colin takes two trots forward and says “that was a clean shot young man; we hated to interrupt you.” A winning smile and a Persuasion of 9. Alas.

A knight on horseback challenges us: “Who are you and what are you doing on my land?!”

Colin notes that we were bypassing a camp of armed men, who looked like they were serious warriors, and we weren’t looking for serious war. Carmina and Marcus both roll 21 and 23. May the blessings of Veritas be upon you, say we, and actually cast Bless. We once again part amicably.

We camp for the night, and head on the next day, reaching Ulfgard. We don’t see an armed encampment, but we do see a half-dozen yeomen patrolling the town. We decide to eat, catch some rumors, and depart town without having to break any heads.

“You guys seem to worry a lot about getting into fights. Is this a thing with you?”
“The last noble we met? That was the first one that didn’t attack us on sight.”

We drop in to The Stumbling Orc, for a meal. There’s a lot of noise about the fall of Tain (correct) to Dracolindes (no). The Sheriff of the Northern Marches has called a general muster in a week’s time, and they’re planning on marching to retake Tain. We neither confirm nor deny how Tain fell, which is probably smart.

We continue on, and get halfway to the Rorystone Road. Off to the south in the woods, we hear 2-4 men approaching the road from 100-200yards away. They appear to be a bunch of foresters seeking poachers. No worries; they miss us completely, explaining the local poaching problem rather well.

We make camp, munching on trail rations; we hear some soft clanking, and we hear “don’t be disturbed, may I approach your camp?”

Marcus calls light. The guy freaks out. He’s a peddler with a cart. “Spare me, spare me! Please, I give my donations to, um, Mitra! Spare me!”

“I thought I had happened upon a divine visitation. I get those, you know. I’m heading to Axeguard as part of my rounds. My name is Thomas. Thomas the peddler.”

The Vile Lords are rebelling against the one true king, Dracolindes! The City-State is under control of the Evil Duke Devolic!

He froths at the mouth a bit. Marcus subtly casts Detect Evil and Zone of Truth. The guy has a few screws loose. A green doll catches my eye.

It’s a rag doll, dressed in green clothes . . . looking like scales. “This is interesting craftsmanship for a child’s doll.”

He found it by the road by Trollslore. Hmmm. Carmina uses his Mend cantrip to fix all the broken stuff.

“Ah! I know the perfect thing you’d never expect! The finest rock candy in all of the North!”

He’s right. It tastes of blueberry and a lot of sugar. Two silvers and it’s ours.

“Could I camp over here?” He wheels his cart over to an alcove.

Carmina takes first watch, Marcus has nightwatch. Thomas heads off to Axeguard, we head off to the Rorystone road.

This is a paved, roman-style road heading north.

The Hungry Spoon Tavern is the Inn we arrive at, shortly after we hit Trollslore. We find the spot where he described he found the doll. Lots of traffic. Lots of dwarves, maybe one in five people.
The big news is the fall of Tain; some dirty looks from some tavern patrons, quelled by an equally dirty look from the innkeeper.

“Sorry, ma’am. The Sheriff of the North has all he can do to keep the peace, what with the rebellion and all.”

We travel fast on the road, and reach Bryny. We discuss whether to go subtle, and decide to wander in like Tony Stark says: “You’re tiptoeing, big man. You need to strut.”

Bymy is a southern most hold of the Thunderhold and appears to be comprised largely of dwarves with a collection of humans and other races. Other than the keep, there is a Hall of The High Lord of the Forest, a couple of taverns The Standing Bear and the Amber Inn. The Standing Bear is a reputable establishment with fine food and drink, cheerful patronage. About the only thing that could be said negatively would be that the Prices are Large and the Rooms of Small. The Amber Inn is more of a local hangout, with a bar maiden of good cheer and exceptional service.

The dwarves at the gate ask if we want directions to the High Lord’s Temple, or the lord of the castle. The lord is a Dwarf, with two others and a human, talking about something. He sees us. “I am Lord Hazmin, how can I be of service to a servant of the High Lord?”

We tell him we’re merely paying our respects, and will kindly accept his invitation to lunch after Marcus pays his own respects to the High Lord at the temple.

Colin goes off to try and get some information about Orsal, who was the person that Maud, our quarry, was dropped off with. The bad guy. He who we must perforate. Etc.

Carmina and I hang out at the temple for a bit, praying to our respective deities in the Santuary: Veritas and the Dwarven version of Mitra.

As I pray, I feel a presence beside me, and see a priest of the High Lord next to me. “How goes the quest,” he asks. I feel the solidity of the mountains from him.

Marcus tells of tumult and distraction, of a quest delayed by distraction, but now back on the trail. Pan Calderax has been a blight on the land, but we are on the pathway to disrupting his plans.

Carmina is interrupted by an awkard dwarf with a clatter. There’s a lot of vague dialog, and I’m absolutely convinced that “Stubby” is Mitra in disguise. “It’s a good thing you’re here fighting Pan Calderax, I think.”

The bard at the inn looks around for Orsal, and is rapidly offered a job by Captain Parvas as a caravan guard. Because he looks like he can handle himself. And Master Orsal could use some guards. He’s running a shipment of grain down there, as well as some weapons-grade steel. The pay is 30 pieces of silver. 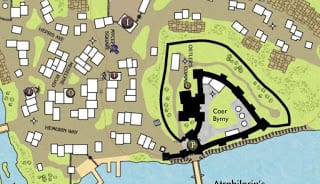 The caravan will be shipping out in a few days, headed down the Rorystone.

Colin goes back to the food and ale. Having been offered a job, he tries to find out more about it, Orsal (a bit of a temper vs. ‘slackers’), and whatnot. But he’s a local merchant, has a building here in town, about halfway between the better inn and the temple. (I on the map).

As Marcus is done meditating and praying, Master Varas, the elder of the hall of the High Lord.

Oh, hell. Looks like we both may have had divine nudges.

We go aside. And tell the Elder what’s going on. Herone. Orsal. Maud. Mori. Pan Calderax.

There are those without honor among both humans and dwarves, and Orsal seems to have a lower reputation. If there’s something you need, go to the Amber Inn, and Parvas (captain to Orsal) will get it for you.

Lord Harzin has nothing to bring before the King for justice.

We discuss a bit more, and decide the next step is to talk to Lord Harzin.

We end there. A rough session at the beginning, but it led to some excellent roleplaying. Not a sword was swung, but good fun was had, and the bard was an interesting addition, and a good fit for this side-quest.

One thought on “Majestic Wilderlands – Weekend at Bryny’s”