Tactical Shooting would have you using AoA(Determined) every time you want to use your sights or claim an Aim bonus. +Hans-Christian Vortisch does impeccable research and he’s right – if you’re aiming, you’re not defending.

Still, the spectacular negative for not being able to avoid suddenly being cuisinarted or Swiss-cheesed means that even when people should be taking that option, they don’t, for purely game-mechanical reasons.

So, some options to tone that down. These haven’t been playtested, but I’m tossing out ideas that will make AoA a slightly more attractive option without it displacing things like Committed Attack, which sees constant use. It’s just AoA that doesn’t.

Technical Grappling has a One Foe Attack Option that gives a slight bonus to defenses and resistance rolls in Contests against a chosen foe in exchange for larger penalties to defend against others, and forcing a Per roll to do even that. It can be combined with All-Out Attack, but only to allow you to roll in Quick Contests at -4 instead of “no roll.”

The original version of One Foe was a bit different. You could defend against another fighter – one preselected other fighter – at -4. Everyone else was no defenses at all. I’d also tack on that you may not coordinate or communicate with your fellow party members, nor be the recipient of re-rolls due to Tactics or Leadership from others.

That might not be enough of a nerf (strong fighters can easily soak -4 to defenses and still have sky-high net rolls), though.

What else can be done?

Just allow AoA to defend, but at a much larger penalty than -4.

Consider that a quality combatant with Skill-18 (and ergo Parry-12) and a shield with a retreat is looking at Parry-15. Even -6 makes this guy have a fairly viable defense, though -8 is looking OK, giving a net Parry-7 (equivalent to a non-retreating parry by a Skill-8 guy).

Actually, that’s an interesting way to look at it. A penalty of -10 to skill is usually considered an impossible task. So re-figuring your AoA Parry as if your skill were at -10 might do the trick. Skill-10 would parry only on a critical success, and a DF-quality Skill-20 would still only have a base Parry-8 instead of the usual 13. That puts Active Defenses during an AoA at -5, which is even lower than the items I rejected above. 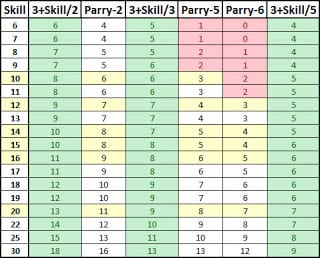 This one requires that you calculate stuff before play, but right now, active defenses are 3+Skill/2, and then you add things with DB, retreats, etc.

At Skill-20, which is achievable by introductory level DF characters with a bit of focus, you’re Parry-13, dropping to Parry-9 for Committed Attack and Parry-7 for All-Out.

The issue with the divisors is that at high skill levels, you take a huge penalty for a small gain. Committed Attack at Skill-20 is all of a sudden a -4 penalty, in exchange for +1 per 2d damage, or +2 to hit. The extra step at -2 seems cheap by comparison. The low values of All-Out Attack aren’t too horrible, but suddenly there’s a question of whether you defend better while you’re stunned (-4 to defenses) or when All-Out Attacking.

Now, on the one hand, that’s not a fair question, because based on the usual rules, All-Out Attack gives a -∞ penalty to Parry. But it’s worth considering whether being stunned should simply use the AoA penalty to defend.

From both a simplicity and fairness with balance perspectives, I’d just leave the divisors behind. Apply the rules from One Foe: you can only defend against the target you’re attacking, or if not in melee, the target you’re aiming or shooting your weapon at. Add to it a -6 to normal Parry, making it -4 worse than Committed Attack, but still possible.

Skill-20 will AoA defend at -6, but only against the one guy he’s fighting – and the prohibition against Compartmentalized Mind and other advantages still not allowing more than one physical action applies here as well – you may focus your physical attack on a single foe.

This preserves the designed-in balance for great additional maneuvers like Committed Attack, but makes it not quite as suicidal to take. 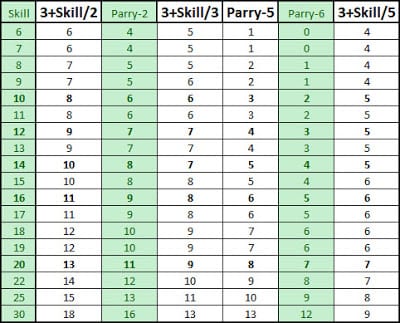 The -6 penalty is high enough that even waiving the One Foe requirements might not be too bad. Even for Skill-20, you’re at Parry-8. That is nothing to write home about, even stacking on DB from shields.

The simplest by far is the RAW. You just can’t. But at least for me in play, the absolute prohibition on defenses tends to drive people away from situations – like aiming and shooting guns – where they really should be doing AoA all the time (for sighted and aimed fire). Toning it down so that you can defend, but badly, would work out OK.

Oh, and what about Dodge? I can safely just apply the same -6 across the board to Dodge and don’t have to worry about complications due to weird divisors.

Final point: in general, you always can make a defense roll, in case you wind up with a crit. Not this time. If your active defense drops below 3 due to selecting AoA, you’re out of luck. This means only those with Skill-12 or higher (Parry-9, Committed Parry-7, AoA Parry-3) have a defense roll at all (and Dodge-9 or higher to roll vs. that while AoAing). So you have to be a pro to even try it, and Skill-26 to even have a 50-50 chance. That’s hard enough to satisfy me, I think.