As part of my research and interest in Viking culture and fighting that I developed when researching Dragon Heresy, I got involved with Asfolk, a Viking re-creationist martial arts and crafting group (mostly martial arts, but the instructor Arthur is also a traditional weaponsmith and has done some pretty cool experimentation).

They’ve got lots of equipment, but one of the things that’s encouraged is to make your own. I finally got a good start on that this weekend, as some of the pieces of what will become a viking shield came in, and I finally have/took the time to get going.

I ordered a basic shield boss from Viking Shield: the semi-conical Shield boss, for $20.

Note that a plywood shield with this boss costs $100 or so. The only shield made of actual planks on that site is poplar, not basswood, and costs over $600. A 4′ x 4′ plywood sheet made of alder (which will be large enough to make yourself a shield if you’re over 6′ tall) costs $45 or so, so if you want a plywood shield, just get a boss, a handle, and save $30-40 and it’ll be sized for just you.

Anyway, I still need a handle; the handle on the Danish two-handed axe from Arms and Armor seems like a nice fit, but I will likely see if I can procure a nice hardwood (hickory or ash) piece of lumber about (true) 1″ x 1.5-2″, and cut it down to provide the required stiffening, as well as a handle more tailored to my needs. I’m going to maybe make a bit of a D-section oval, with a few flats for my fingers and thumb, and oriented a bit more like the weapon it is.

I’m going to alternate between what I did, and then guess what one might do without power tools.

Firstly, I of course assembled the boards and laid them flat.

This, of course, is decidedly non-trivial. You cut what you needed from the right kind of tree, and didn’t just pop over to a lumber mill with a bajillion square yards of pre-cut lumber. Or maybe you did; it’s not like sawmills weren’t known, and the need for lumber in a middle ages society is even higher than it is now, since metals were so hard to come by. Just thinking that “I grabbed six perfectly square, right-sized and smoothed planks” is a crap-ton of work makes one appreciate some other bits that come later.

Then I glued them together. I have three bar-clamps that will easily accommodate the 36″ x 36″ field of boards I’m using. I wound up gluing them in two shifts. Every other joint (so gluing three sets of two), and then the two remaining joints (three double-planks). I held them down flat with bricks, but what I should have done was glue them together with some boards or other “keep it straight and flat” guides in place. As it was, it worked fine, with only a bit of shifting, which is what you want to avoid. The shifting is on areas that will eventually be scraped and planed down, so it won’t matter. 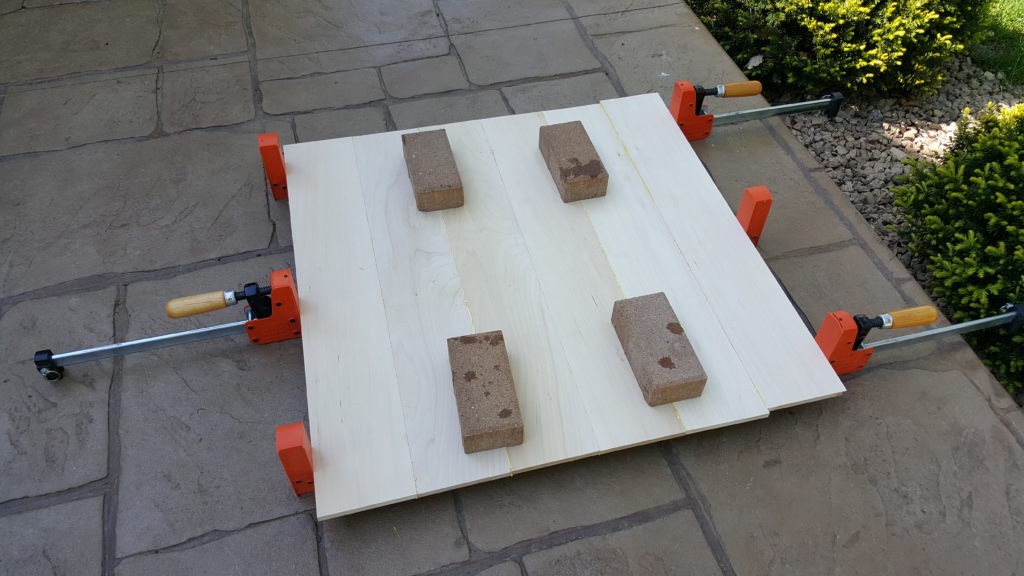 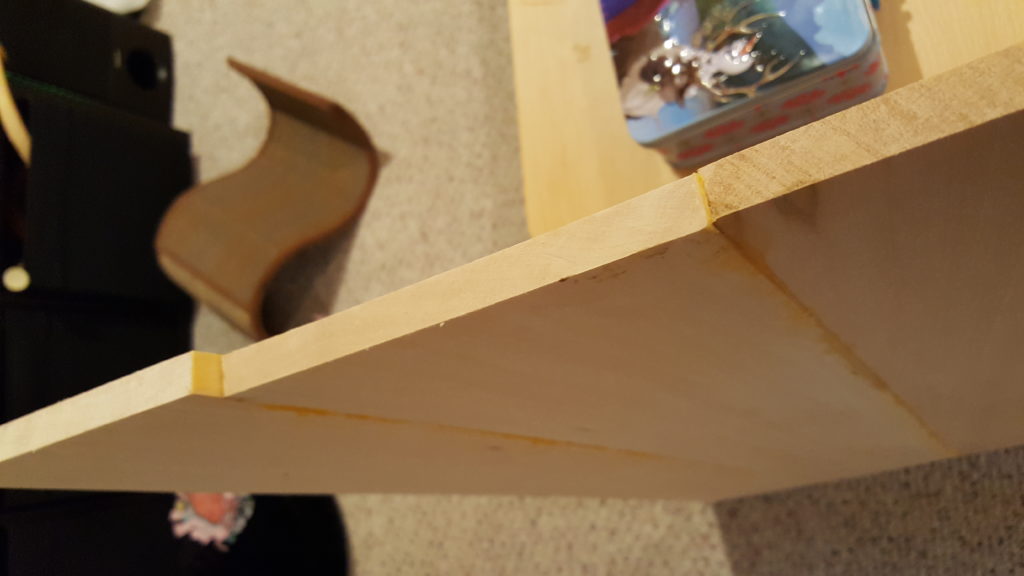 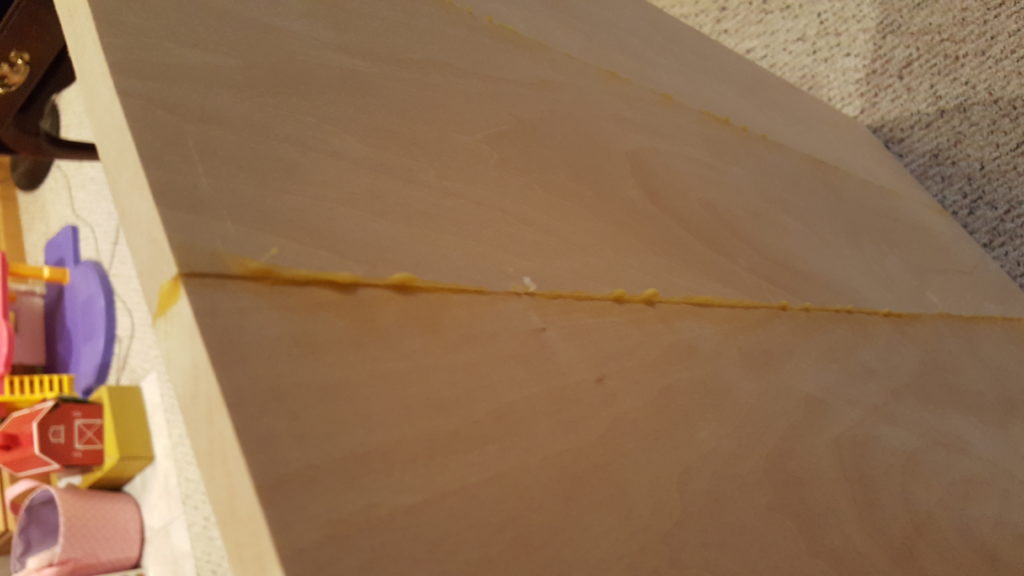 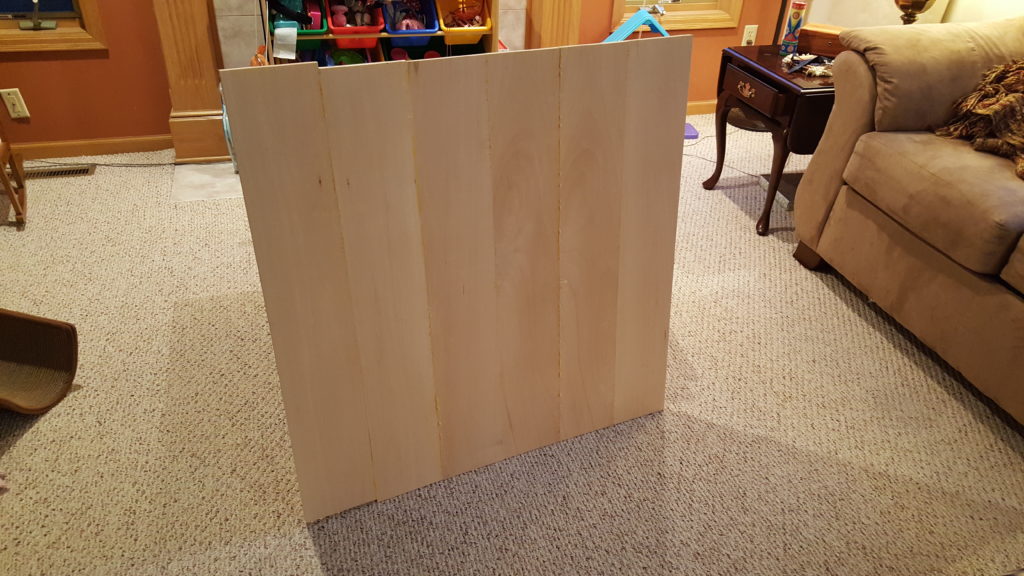 The amount of metal – aluminum and steel – in a bar clamp is truly huge given what was available in the period. Now, it might have been possible to make such clamps out of wood – in fact, I suspect it was more than possible. But one could also use pieces of cloth, and tighten them up using a tourniquet-style “wind it for compression” method that would prove effective. This sort of clamp – called a band clamp – is used on picture frames today.

Back then, I’m guessing they’d use what Arthur used to make his shield for the recent demonstration: boiled hide glue. It’d be available and convenient, and I suspect plenty strong enough.

After gluing, I used a scrape and an orbital sander to smooth the boards where they’d disjoined a bit, as well as removing the drips of glue that squeezed out between the planks.

Historically they’d probably use a plane or a two-handed draw-knife, and honestly, that would be faster than the sanding and chiseling I did.

After the gluing, I had to cut the round shape. I had heard a benchmark that the shield should be half my height in diameter – about 34″. I decided if I could get anywhere between 34 and 35″ I’d be good. I put a thumbtack into the board, and then used a piece of twine (because it didn’t stretch) and a pencil to make a radius-generating ersatz compass. It worked well enough, and I drew two circles that I was going to cut between. 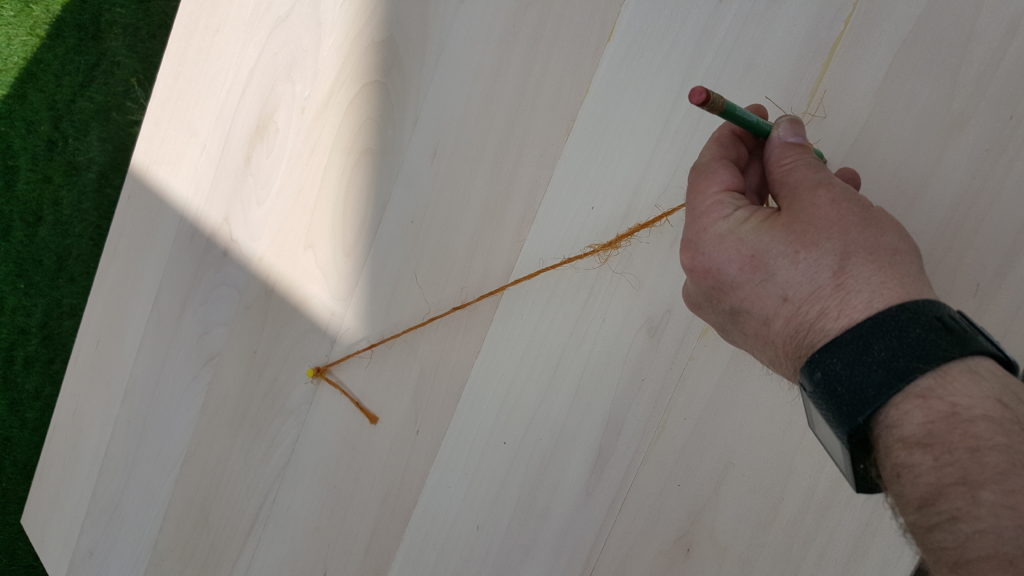 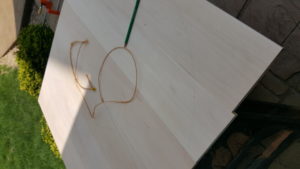 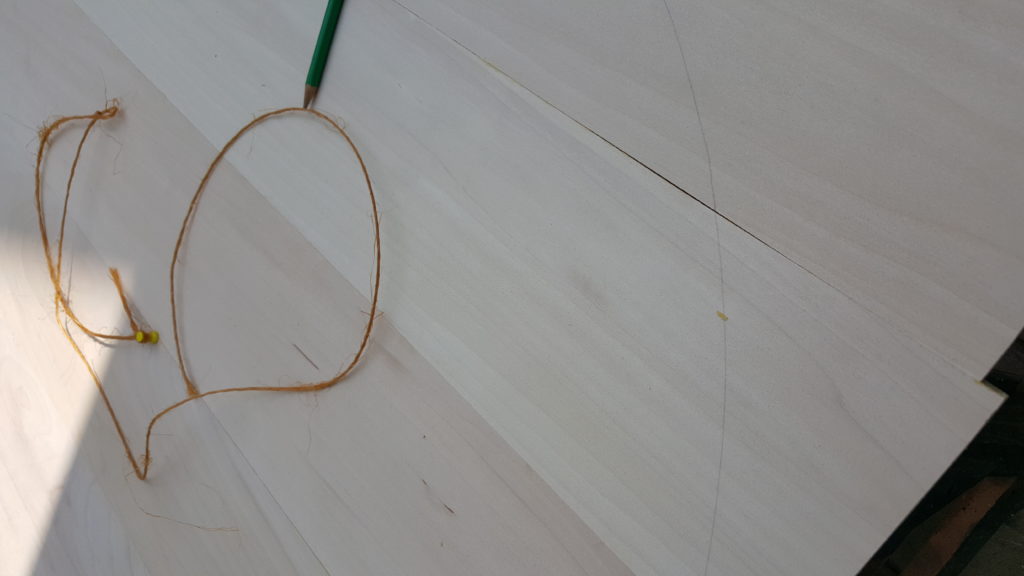 The lines are pretty faint in the pictures, but you can sorta see ’em if you squint. In any case, it worked.

I see no reason that you couldn’t do this with twine, a leather scrap, and either a stylus, a charred stick, or some other marking device. You could also just eyeball it.

I then cut it out with a jigsaw, and sanded it smooth. I re-measured the circle, and then shaped it to be about 34.75″ in basic diameter, checking it with a radius string again.

That’s where the project stands now. I’ve marked the center where the boss will go, and I will further lighten the thing by shaving down from the area where the boss ends to the edge from the full-1/2″ thick down to about 1/4″ on the edge. That should take about 25% off of the weight. I can think of a few technological ways to do this – use a router in steps to get a terraced profile that terminates in a 1/4″ outer edge, and then sand it smooth so the profile keeps. But it’s probably simpler to borrow hand tools from Arthur for this, too. 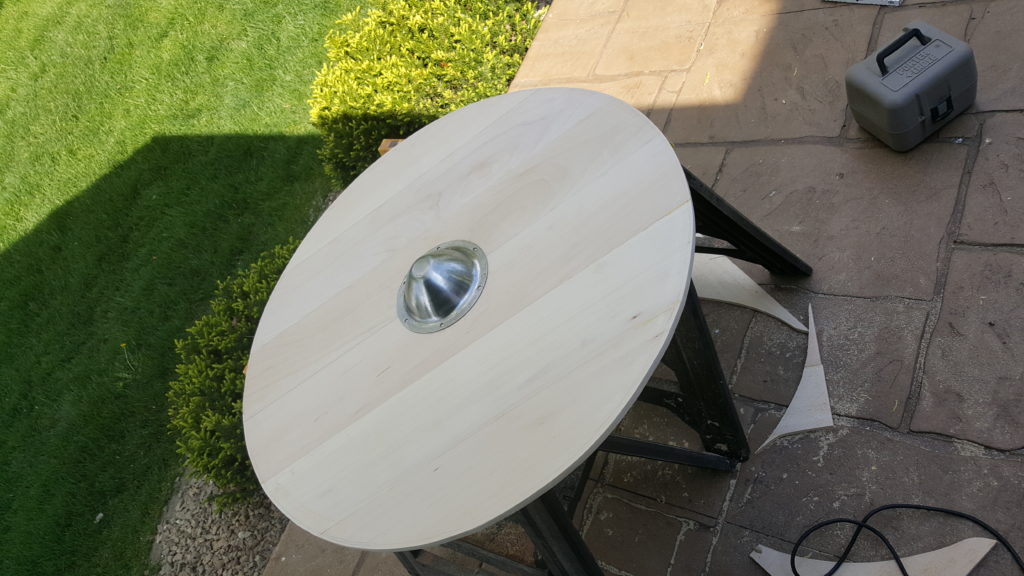 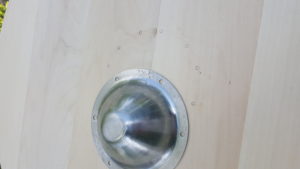 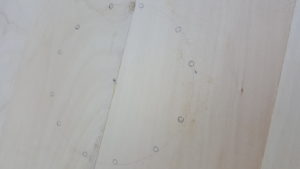 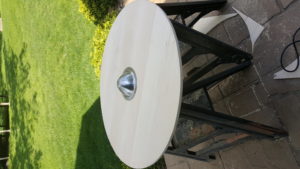 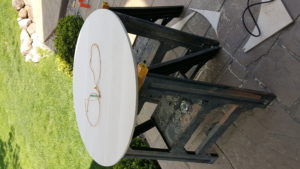 10 thoughts on “Making a Viking Shield”