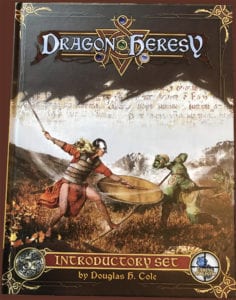 I got to play Dragon Heresy in a game run by a young lady my own system on Friday. She’d either never or rarely GM’d before. She decided to run in my book, as her dad was a supporter of both the original Lost Hall as well as Dragon Heresy. My take-aways?

There’s an obvious fix for this: a short flowchart. Ideally something that fits on a 3×5 or playing card. Once you get the system, it’s very smooth. But a quick reference for ranged and melee combat that would fit on the back of a playing card is now on my radar.

All in all, she designed and executed a two-hour scenario that finished in two hours, which is amazing for a new GM, so well done to her on that.

As for my part, I kept my promise. I answered questions where prompted, she ran the game, and I shut up and played my character.