Skip to content
During the Citadel at Nordvorn Kickstarter,  Steve Jackson Games and Gaming Ballistic each hosted a stretch goal for the other company’s campaign. Both campaigns were successful, and so “Fantastic Dungeon Grappling” got made just how I wanted it.

How Do I Get the Book?

There are three ways to get it. 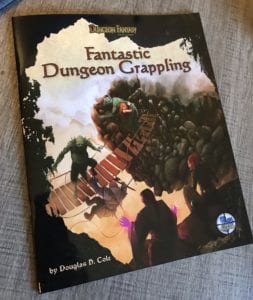 The first – and best – is to wander over to my online store. You can find the Print version there, as well as the PDF. At the moment, Gaming Ballistic’s web store is the only place you can get the Fantastic Dungeon Grappling print book by itself.

You can also go over to Warehouse 23 and get it there in PDF. That’s the second-best for me, as I pay a very reasonable cut to Steve Jackson Games for hosting it on their far-more-popular web store. Eventually, you will also be able to get the print book there too, which is about as good for me as buying the book from a retail store if that store buys it directly from me. In short: pretty darn good.

You can also get the PDF from DriveThruRPG. My other stuff is hosted there too. Only in PDF, though, since I got offset (high quality) print runs for these and the POD quality will simply never match what I had done by Livonia over in Latvia.

Fantastic Dungeon Grappling grew to eight pages from only the four found in Hall of Judgment (2nd Edition). It incorporates learning from over a year of play in terms of penalties and how folks actually grapple in the game. Experience showed that while the control points given and received were fair, they were not always fun, and I don’t care how  detailed or realistic a system is, if it’s not fun you won’t use it, and it’s missed its mark.

We also looked at things that monsters need to do (swallow PCs whole), flying creatures need to do (pick you up and fly away with you so they can eat you later or feed you to their hungry offspring), and some dedicated “abracadabra you’re grappled” spells. I think we amplified on a few other options as well.