Looks like things are getting more interesting. Geoffrey Fagan made some notes on Social Traits in GURPS, with three more parts on the way (to appear weekly). Also, Roger Bell-West has started a blog of his own, and has penned an article on Rapid Fire and Shotguns in GURPS 4th edition.

No matter how great your PC is on paper, the real secret to “power” gaming is your ability to influence the plot, and to do that, you need to have some traction in the setting. That’s what social traits get you.

I think this is a nice point made here, in that while combat skills and other typical PC-sheet skills and abilities are an awful lot of fun, your place in society and your ability to use that (or be used by it) is dictated by these social notes.

Part I: Clout
GURPS has 3 traits that address social standing: Rank, Status, and Social Regard/Stigma. If you have any of these traits, you have a “place in society” that defines existing relationships with many other people.

Hmm. I think that there are ways to broaden this out considerably. Reputation can certainly dictate your place in society, or at least boost it (or detract from it, for that matter). Allies and Patrons can likewise count here; knowing that your foe has a Patron in the Guild of Messy Assassination might certainly give one a different appreciation of his place in society.

Furthermore, one big one missing is Wealth. +Sean Punch has elaborated at what Wealth entails thusly:

Wealth is a highly complex, abstract social advantage that encompasses about as much as IQ does, including but not limited to starting money, job qualifications, social connections, credit rating, land, and a hidden economic parallel to Status.

Wealth only changes if you specifically invest the required capital – taking it out of play – to buy, bribe, and insure your way to a social position where future changes in fortune won’t alter the respect and credit accorded to you. This is the big difference between somebody who keeps their winnings as liquid assets and uses them for trips, cars, and homes, and somebody who invests their winnings in nonliquid assets that will continue to make them money in the future. The former only requires cash; the latter also calls for points, which represent the work done to build networks.

As such, Wealth is an extremely Social trait and bears considering. 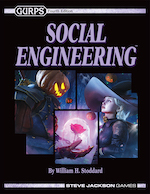 If you are part of an organization, you have Rank…even if it’s just Rank 0, and even low Rank defines your character, be he a private in the army, journeyman of the Coopers’ Guild. The decision to make a character with Rank will guide your choices with respect to attributes, skills, talents, and other traits, usually including a duty. If you have any rank at all, you can request that the resources of your organization be allocated to your purposes (roll Administration), and the higher your Rank, the more of those resources fall under your direct command.

It would be a good idea to buy and read GURPS: Social Engineering to get the full take on Rank and what it can do. There are mechanics presented (the Assistance Roll) on pp. 51-52 of that book. Further, a guideline for how many people you have under your command (though I disagree in some of the particulars) is also presented on p. 14: The Arithmetic of Rank.

In addition, Rank provides a reaction modifier within your organization, even for member outside your direct chain of command.

I had to go look this up – I’d need a better citation, but I think this isn’t true. It’s true if Rank replaces Status (the 10 points per level version of Rank), but the thing about Rank is it’s pretty absolute. Someone is either in your chain of command, in which case they obey you or suffer some degree of consequences, or they are not, in which case your Rank (but not your Status!) is mostly irrelevant.

For 5 points, a level of Rank means that up to a dozen people take orders from you; now tell me again how HT is undercosted! For 10 points, Rank 2 comes with a free level of Status. Remember that you pay for Rank you can actually use; if the sergeant really runs the platoon, then his Rank advantage equals what a lieutenant should theoretically have, while his boss only has Courtesy Rank!

The bolded bit isn’t correct, I think, by the rules in the Basic Set, nor its expansion in Social Engineering (p. 13). If you have the authority, regardless if you use it, you have honest-to-Kromm Rank. If you used to have formal authority, and now only get the trappings and courtesy of your former Rank, but cannot actually command obedience (though you may be able to get obedience thorugh successful use of influence skills), you have Courtesy Rank.

A good test: can the people you’re trying to get to do what you want be punished if they don’t obey your orders? You have higher Rank than they do. Can those people be punished for actually obeying your directions? You have Courtesy Rank!

Status attends power, which is why you get some free with Rank and Wealth, but you can be powerful in other ways, perhaps a mighty wizard. The source of power is a separate advantage, but Status represents the perks, which are setting-dependent but should include partial exemption from his society’s Control Rating

Possible, but a setting-driven switch; this may or may not be true in any given campaign.

and always includes reduced social friction: Higher Status means your character has more time to be productive. He calls on the mayor and walks right in; other folks have to wait, even if they had an appointment. Perhaps it’s less formal, and he gets face time with the mayor on a golf course, which helps explain why Status comes encumbered with a higher Cost of Living. The cost is warranted though, because Status also counts as a Reaction Modifier.

Now, this one is definitely true, though I had to go look it up. Conveniently, it’s under Status as a Reaction Modifier, p. B29.

Exemptions
If the usual laws don’t apply to you, then you have Immunity, Legal Enforcement Power, or Security Clearance. What all of these advantages have in common is that they can be revoked by others, so the PC must exercise good judgment in their utilization, or else produce such good results that his superiors will excuse abuses.
Immunity amounts to easing of social friction (a lot), so if you already have high Status, you shouldn’t have to pay for Immunity separately.

This might or mightn’t be true – the examples listed on p. B65 charge points for Legal Immunity and give the examples of a medieval bard, abbot, or duke – but it’s not RAW. If you can break the law to any extent, you must buy this, by RAW. Status does not give you an exemption to the law (though it might allow you to influence the end game, what you’re doing is still illegal for you).

Suppose your campaign takes place in Eastland, and your character is the ambassador from Westland. Back in Westland, he’s a high Status individual, so take that as a perk equivalent to Courtesy Rank. Here in Eastland, nobody cares about barbarian honors, but the ambassador still has diplomatic Immunity.

This is a good, but very campaign specific example, and does not define the rules, but applies them with judgement. Now, that’s exactly the GM’s job! But a French Diplomat who also happens to be a high GURPS Status Duke and is currently in England will damn well reap the benefits of both Status (at the full level that includes Rank, likely) and any immunity he gets as an ambassador, probably at the 5 to 10 point level.

Similarly, Security Clearance is one of the benefits of Rank; take the advantage only if you have no Rank, or if your clearance exceeds that nominally associated with your Rank. A good example is the civilian contractor working on a secret weapon; since he has no Military Rank, he needs Security Clearance. Having one is a good way to get in on the action, or to get more intel once the action starts.

I’d probably phrase this as “Security Clearance can be one of the benefits of Rank.” Need to Know applies to even people of high rank, so just because you’re a General doesn’t mean you have instant access to The Dark Phoenix Files or The Manhattan Project. If you want that specifically, you probably have to pay for it.
Parting Shot #1

I found this about 4/5 on the GURPS 101 scale. Most of the advice is quite solid, but there are some rules interpretations here that, while justifiable/understandable, are not strict RAW. They make great house rules, though, and in some places there’s enough leeway in the rule itself that some of these are just points of discussion. No one would blink twice if told “Yeah, you’re a Status 6 nobleman, so no one of lesser status can charge you with a crime.”

The overall point that in genres apart from DF, where “Murder Hobo” is all the Status you need, is still quite applicable: points spend in useful social advantages are points well spent.

The first GURPS 101 article for Roger Bell-West, he tackles automatic fire ably and succinctly. Not much more to add. He doesn’t touch on hit location when using automatic fire, but I don’t think the basic rules for non-spray fire are any different. If your hit roll succeeds (and your foe fails to defend) your bullets go to the location you wanted them to. All the others miss by the basic rules.

Actually, thinking about this for a moment, I just came up with a fun idea. Awesome – a new blog post with actual content!