This week brings to a close the week of blatantly shilling for the Dungeon Fantasy RPG Kickstarters. Both Citadel at Nordvorn and the Dungeon Fantasy Monsters 2 and Boxed Set Reprint campaigns end this weekend, with  DFM2 closing tomorrow (Friday), and Citadel coming to an end on Sunday. Both funded and passed at least one stretch goal, and Citadel – which had fewer to begin with – is on the cusp of passing another.

The DFM2 campaign is currently past $50,000, and since one can see an additional 20-25% funding in the last two days of a campaign, it’s not over yet to get the $60,000 stretch goal. If you’re a backer, you can also answer Phil Reed’s question “What next?” by commenting on Update 14. 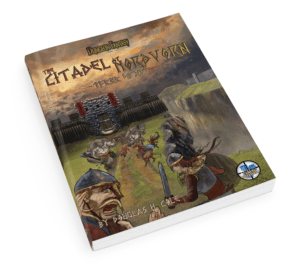 The Citadel at Nordvorn turned from “gee, that’s worrisome” at the beginning to “Gaming Ballistic’s Best Kickstarter Ever.” It is already the best funded by several thousand dollars, and has 515 backers, which is 10 fewer than Hall of Judgment ended with, and 100 more than Hall of Judgment was three days before it ended. It’s already at 112 pages, Fantastic Dungeon Grappling will be inside the boxed set, and we’re $500 from making it 128 pages. From this point in HoJ to close, it picked up 26% additional funding. If we do that from here, the campaign will hit $24,570 . . . just $430 short of the offset print run. Of course, to do that, we’ll need 144 more backers at the current average pledge level. That last goal is going to be close!

We have a new blog this week! Three Hundred and Thirty Three, by Michael Keenan, who has started off strong with ten posts this week!

Bat in the Attic (Rob Conley)