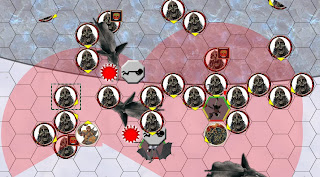 We picked up where we left off. Shiba, Thumvar, and Staver were in the thick of it on the right side of the battlefield, while Cadmus was preparing to invoke Smite again against something like eleven targets in range.

Well, good plan. The other guys managed to not get too badly grappled and mangled by the hordes of undead, and screaming Undead Lich Lady tries to land on Cadmus’ head, trying to grapple him with her freakin’ hair. Cadmus had a plan, though, so he didn’t move – and Crazy Hair Lich Lady landed nearby. Then Cadmus invoked Smite on his turn, killed nine frozen dead or mammoths, wounded a few more, and singed and really pissed off Lich Woman.

Next turn, she grapples Cadmus with her hair, but Shiba takes his turn to chop through first her hair, then her neck, beheading her. Cadmus uses Protection from Evil (Enhanced) to clear the field of undead . . . and a Very Mad Mammoth slams through all of us. I think the rest dodged and whatnot, but Cadmus takes one in the back for 19 pi++, less DR. Still takes 14 injury through DR 12.

But then the others make short work of those remaining nearby as Cadmus makes two critical successes and a regular success to not lose concentration when hit by Giant Angry Mammoth. So with all the mooks forced to stay a minimum of 12 yards away, we finish off all that remain at our relative leisure. 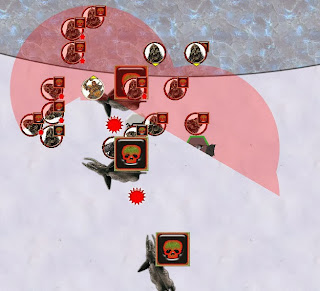 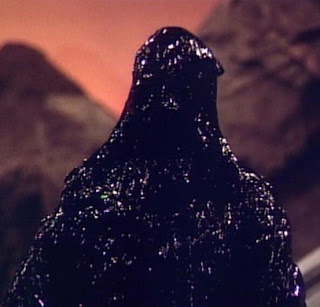 At this point, we discover that we’ve arrived on the set of Skin of Evil. The big monolith thing is actually some sort of extruded and hardened essence of pure nasty. When those of us with good intentions walk on it, it begins to burn and scorch our boots and armor. When Staver the Infernal enters the circle, he feels like Old Uncle Evil is welcoming him home, and he’s ready to teach him all those things that he was too young for before. In short, we looked at the nasty evil thing, saw the three-clawed symbol from Turok’s Bore (Tanuanak? Tura lura lura? Fantasy names. Sheesh.), and went back to camp.

We spoke to Ameiko, healed up, and generally decided that we should probably go on to the Creepy Towers of Doom from which None Ever Return (except hopefully our heroes). When we woke up, the blizzard we’d been in had ended, and no sign of the monolith was visible – it had just disappeared, taking the storm with it.