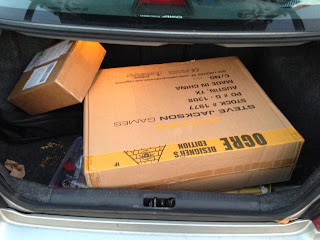 My copy of Ogre was delivered this week. I supported the Kickstarter, obviously, and despite the fact that it pushed my book, Technical Grappling, out by maybe a year or more, it was fun to finally get this thing.

The pictures from the various sources do this thing no justice whatsoever. It’s huge. Mindbogglingly huge. The thing barely fit in my trunk. Now, I drive a WRX, so it’s not a big trunk. But still. Damn.

I finally got it home and got the cardboard off. First thing I noticed (no pix) was that it was quite cleverly packaged, with the counter sheets outside the box, and covered in cardboard and some styrofoam. There was some trivial damage on the outer box, but nothing to get persnickety about. 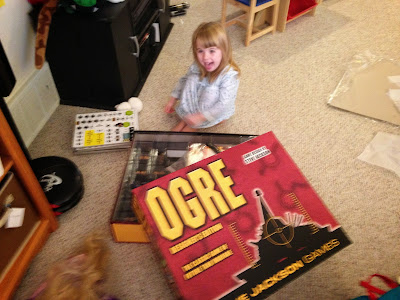 Opening it up, I got my first glimpse of the simply outstanding production values of the game and its contents. And it’s still huge. I provided a convenient four-year old girl for scale. Not sure where she came from, but hey, you use what you’ve got.

The box is sturdy and simply gorgeous. As soon as you open it up, you can see how much care went into the creation of the packaging, since the Ogre Garage is right there in front of you. It took me a while to find that the assembly instructions are on the back side of the giant piece of paper – but it didn’t matter. You can mostly figure them out, and the “put this figure in the garage in this way” underlayment in the Ogre Garage provides enough hints to allow full assembly. Then I found the instructions, but didn’t need them by then. 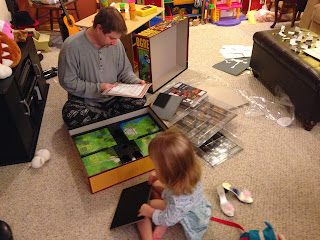 The packaging is complete and well thought out all around. I’ve put up some of the pictures, with my helper showing me what to do, giving instructions, and generally demanding to start playing the game immediately. That being said, if you ever want to distract a small child for hours, give her this game. Its 1,000+ counter pieces will prove an irresistible challenge. A gauntlet thrown down that she will only too gladly pick up. The only casualty was a section of road/tracks that we had to creatively adjust from a 3-hex length to a 1-hex and a 2-hex set. So now there are 1,001+ counter pieces.

I was surprised and pleased with how easily and well the counters popped out. They’re in the sheets tightly enough to not go anywhere, but not so tight that you’ll break them. That being said, there are a lot of small areas that could come off – the Ogre masts in particular – so take care not to break them just for caution’s sake. They’ll pretty much pop out though.

Finally, the assembly of the Ogres. Difficult? No. I did the first one, we collaborated on the second, and then, saying “Let me get my model!” this is what happened next:

So there you go. Even a four-year-old can do it. The only comment is that some of the pieces might be a little loose. If that’s the case, a toothpick and a tiny dot of white glue will fix that right up.

I have a feeling we’ll be playing this – though I’m positive that the rules (which I’ve never learned; I never really played Ogre back in the day) will be irrelevant. But we’ll play eventually, and she likes rolling dice.
I still don’t know where I’m going to put this thing, but it’s a great big huge box of fun.

4 thoughts on “The Ogre Has Landed”