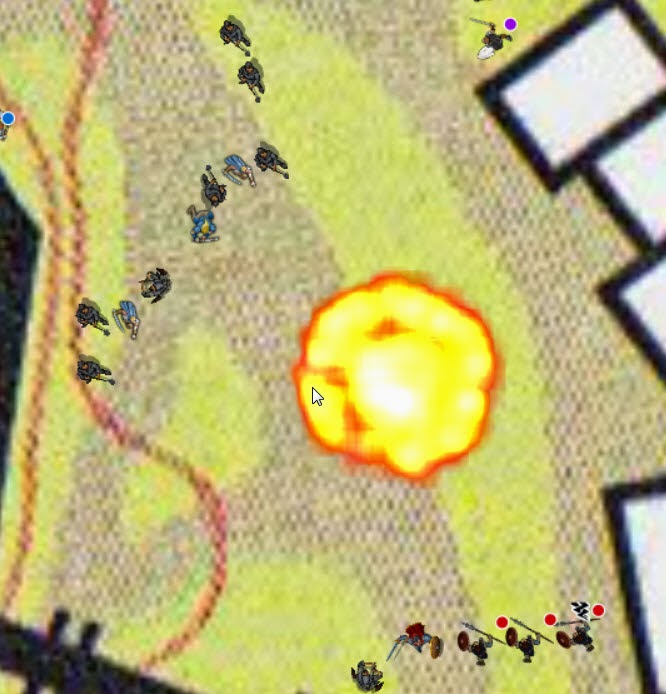 We pick up immediately after a fireball and a command to cease fighting.

They ask which of us in charge, and we muddle. We decide that the paladin has the most moral authority, Keyar the arrow-happy elf is the most decisive, and Carmina tries to keep us from getting killed a lot.

They tell us the town is under their control, but they don’t want to fight us. That’s a nice change, really.

The Bishop of Tain says that they’re in charge, on behalf of Dracolindes and Mitra.

We’re pretty much being dictated to, so we go with it. We’re told in a week a forest of orcs will come to Tain, after the column of smoke signals a ready victim.

We come to an agreement that the Twilight Company is in control of the town, but that they’re going to leave and the Bishop will be allowed to rearm and reassert normal order in Tain.

We think that quitting the fight here is by and large a good idea, and if that means getting our noses rubbed in it by an NPC mercenary company, so be it.

We try and figure out how we’re going to untie this knot.

The hostages (the sheriff’s family) are free to go – they were just swept up in the fighting. We try and explain that to them. The seven guards, the steward, and four ladies form up and march through the gatehouse.

We ask for a quick word with the Steward, and pass on the warning about the orcs. We note he’s welcome to stay to discuss the defense of the town. He agrees, with some (deserved) skepticism. The other guards leave.

Rob accidentally calls my character Marcus instead of Mark. We all agree that would be a hell of a lot easier to remember, because Mark sounds like a player, not a character. We rename him on the spot as Marcus Bludiell. Yay.

Sildar Hallwinter comes over; we last saw him back outside of Phandalin with the miners. He notes that the PCs in a prior adventure had crushed the trollguard or something like that. The orcs are not likely to come soon.

Sildar and Sir Halleck the Steward represent the City-State faction

The sheriff is dead. The constable (his son) is dead. The steward is part of the sheriff’s household, but not a formal office. So the Sheriff of Tain is up for grabs, and the Twilight Company is claiming the office.

There are no takers in our party.

A new PC, Fosco Chubbs the halfling, notes that the Twilight Company is the closest thing to neutral as we have here, and the area is teeming with violence, which settles that we need to have a military presence here.

We actually have the writ authorizing the appointment of the Constable, but they’re not willing to accept a (probably false) transfer of authority. So Twilight Company sends the Steward packing across Varius’ Bridge.

Out of game, we get a refresher. We walked through Veylon, with the Therians holding the burned-out keep. 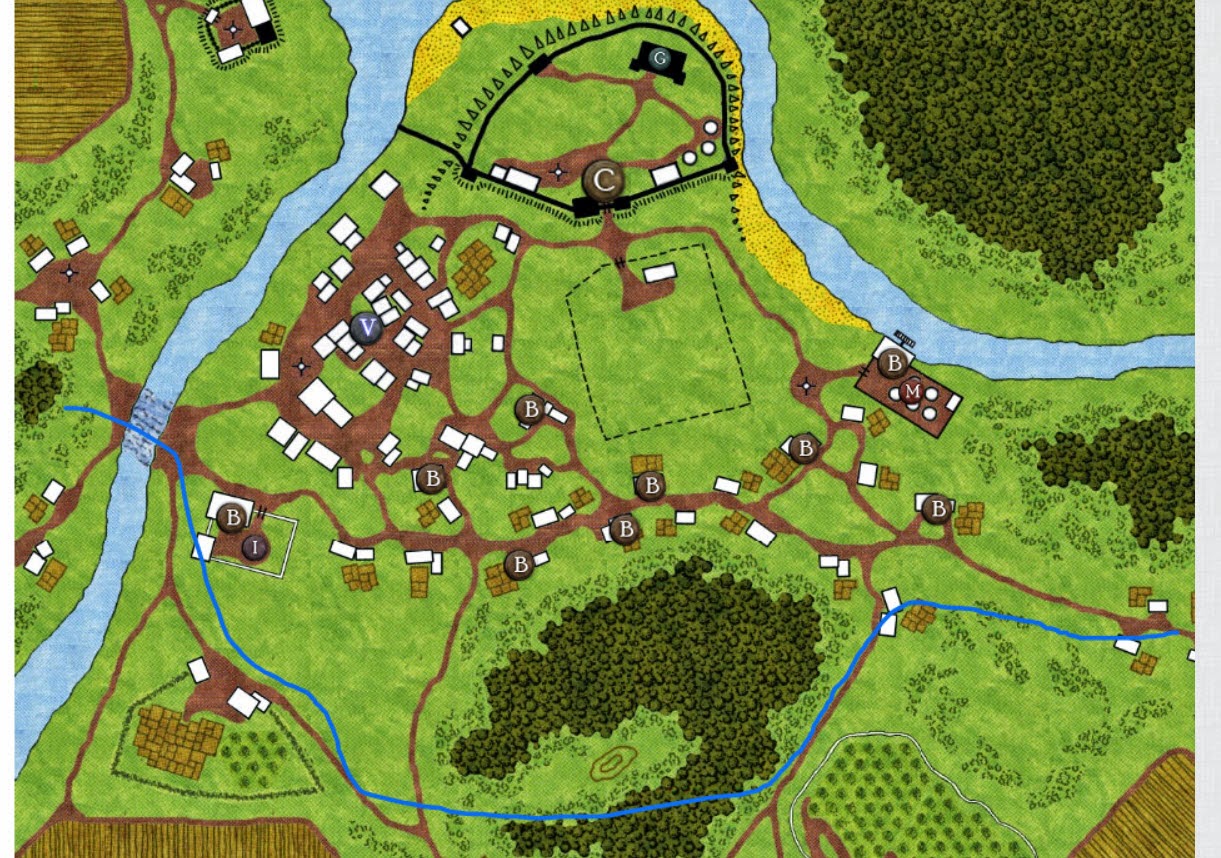 We get grilled by the Twilight Company asking why we’re here. We try and explain. Herene was influencing the minions of Set through Heria, and Herene is directly connected to the dragon Pan Calderax.

The new sheriff(s) agree to keep people away from Herone, giving us time to take a Long Rest.

Looting the Settites finds 1,034d, four potions of healing, and a +1 Longsword.

During the long rest, and some meditation, Veritas confirms that the new direction, the focus on Herone, feels better. Carmina hands over some money; she was a courier from the principality of Modron, and they’re funding the Mitrans trying to set up the dominos to fall.

We start the next game day, which only took us four adventures to play out.

The day dawns bright and crisp. The Temple of Set has been looted, supervised by the Twilight Company, and rounded up the Settites.

Keyar goes to talk with the sylvanites (Ranger elf-friends, I think).  Pan Caulderax has been more active. Something has angered the dragon and his agents are more active, and he’ll be meeting a druid this afternoon.

Leshar heads over to the Troll Path Inn to bust some Settite heads. He finds some miners they’d encountered previously, and the guy whips up his head when his name is called, and starts a fight. It ends quickly and badly for the thugs. One of the Twilight Company is on hand to threaten us. Leshar threatens him back. They almost come to blows, no, no, they DO come to blows.

Leshar goes for his sword. Vognur goes for Leshar, trying to knock him down and prevent yet another out-of-control spiral of violence.

So, Vognur actually out-rolls Leshar, and grapples him. So Leshar’s speed is zero, and Vognur drags him away by 15′. Vander the Twilight Company guy doesn’t move. Leshar starts laughing. Situation diffused. Our heroes take the Settites back to the barn, and Leshar notes “I didn’t escape one master just to serve another.” He then shows Vognur the official seal of the City State, taken from “inside the Steward’s chest.”

“Um, his chest cavity, or a box? With you, one never knows.”

Marcus chats with the Bishop of Mitra. He explains the lay of the land and what we know. Marcus gets the lowdown from the Bishop of Tain on the aldermen who consort with Herone.

Fosco, our spy, notes, a merchant, two craftsmen, a wealthy craftsman, and someone from the Jug Inn all come. Seemingly everyone in town came to chat with Herone at one point or another.

Ultimately, we decide to use the seal of the City-State that Leshar took to summon Herone to a fake meeting with the new Sheriff of Twilight. We’ll search her place in her absence.

But on the way to tell the Sheriff of our plan (why are we telling them?), a few memeber of our party swear they see an important NPC, the Glasstaff, is vaguely headed in Keyar’s direction, thanks to a crit on the Perception roll. Vognur decides to shadow him . . . and we see Glasstaff enter Herone’s house.

Vognur beats feet back to the Twilight Company and let them know what’s going on. But we have a new wrinkle, Glasstaff (who the hell is he?), the Wizard responsible for all the trouble in Phandalin, is a killer and nothing good will come of this.

Writ? What writ? After we’re done, come talk to us about this writ/forgery thing.

So Fosco sets out, rolls Slight of Hand for the forgery under the influence of Guidance, and rolls 16. (“Mitra says I before E, except after See!”)

We find a reliable courier, and we set up around Herone’s house, then dispatch the guy. The messenger goes in, and naturally, Herone detects the forgery and starts beating the hell out of our messenger. A merc walks past, the glasstaff walks past, the messenger disappears, and here we go.

We end there, as the fight is about to begin. 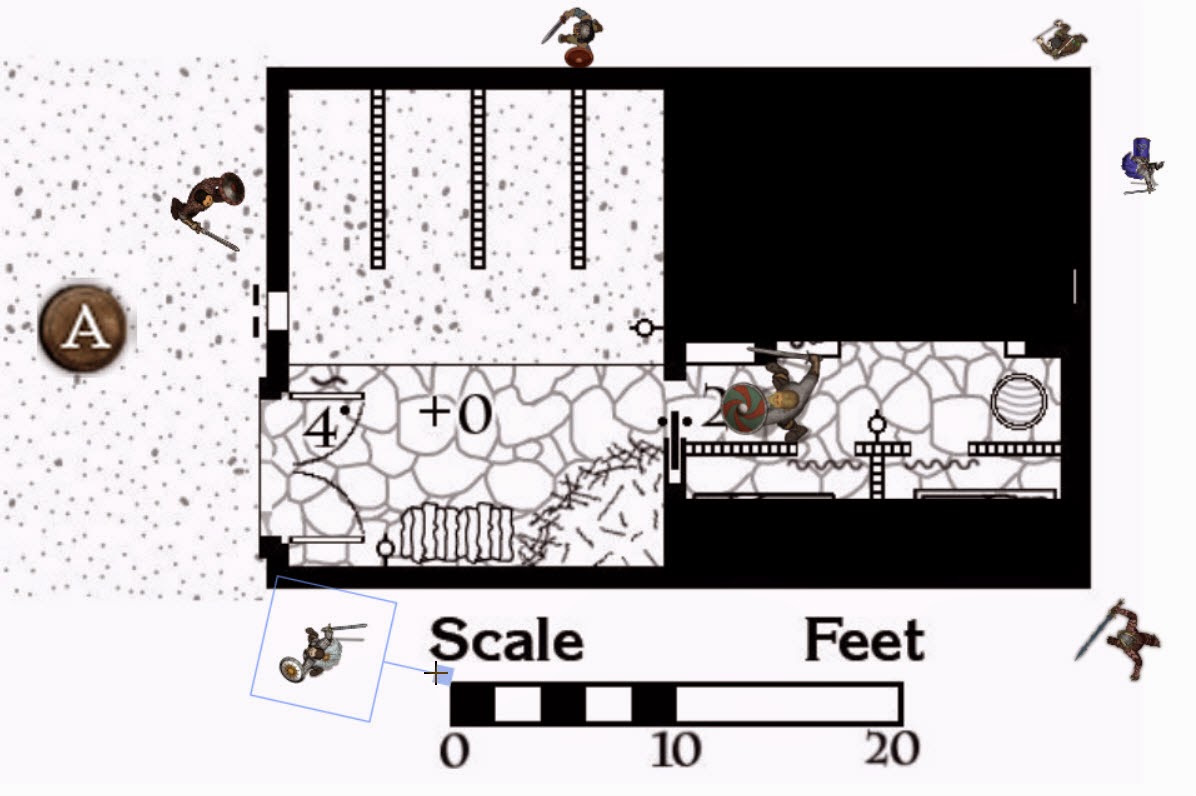