We finished up the clearing of the village from last game. I’m not going to do a full session report, because I’m a bit burned out at the moment. Not in a bad way, but if you’ve been keeping track of what I’ve been up to, you’ll see that the game last night came at the end of a frantic week.

An awesome week, true. But frantic.

So, what happened in the game?

The Village is Secure

The group picked up at least one PC stronger than we left off last game. We had all 1st level characters, or maybe 1 second level, but mostly 1st level. We had

So the party started out looting the bodies of the dead Lizardfolk shaman, and they found a key on him. Almost immediately thereafter, they found a locked chest, and the key fit it. There was also a bunch of blacksmithing raw materials. Total loot about 473 gp.
There was discussion about making hide armor from the lizardfolk skin, since they have DR 3. The group correctly identified the likely reaction of any and all lizardfolk that see such armor, but then, lizardfolk eat people, so I’m not sure there’s going to be much “Coexist” going on here. I think they did eventually decide to skin the guy.
There was also some sort of discussion and die roll about what happened when they killed the shaman, and Tom (I think; it might have been Jack) rolled a 1 on History, which is the skill used to get information on humanoid and civilized groups. We decided that he was absolutely certain that all of the lizardfolk and kobolds were spiritually bound to the shaman, and when they killed him, any remaining would just up and die.
Certain. He must have read it at a scribe-site on EteraNet or something, and EteraNet is thoroughly fact-checked (WodenFact certified) and never wrong. So to quote Lieutenant Gorman from Aliens: “The village is secure!” 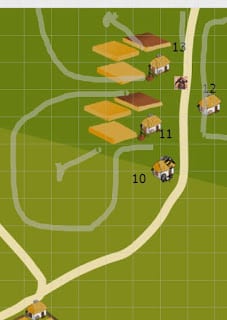 The only houses they hadn’t dealt with were the four village houses to the northeast on the map. The one labeled 10 was unusual in that it did not seem to have an adjoining field, but was set away from the main square. The PCs didn’t know this, but it was the ranger/scout of the village, who liked to live away from things, but wasn’t a farmer.

Adaemis and Jack, I think, both noticed that the house was sealed to be light-tight, and the right kind of rolls provided that it seemed quite similar to the treatment the Inn/Tavern had been given to keep light out when Kobolds were home.

Adaemis passes along this warming. But no, no. The village is secure. Tom just opens the door and walks in. Two kobolds rush him, the other wakes up groggily. He backs out frantically, and we’re treated to the lovely spectacle of a STR 9 rogue trying to hold the door against two ST 7 kobolds.

His fellow team-mates stand back and ask him if he really needs help. After all, the village is secure. Perhaps he’s dealing with ghosts? Should the Cleric try and turn undead?

From what? The village is secure, after all.

Anyway, at this point, one of our eagle eyed characters – I seem to recall Adaemis rolled a 20 on damn near every perception check that game – noted that a fully-armed lizard man had stuck his head out of House 11, some 135 yards (about 400 feet) away. Within longbow range. Jack fires an arrow at it, and the lizard-warrior uses his reaction to simply brush the arrow out of the air with his shield.

He and one other lizard man emerge, form up two abreast, and start dashing into combat.

We decide that three PCs would make mincemeat out of the kobolds, as they let the door open, the kobolds rush out into the sun, gain disadvantage, and are very nearly slaughtered on the spot. At least one injury, one injured with broken morale, and one groggy. We rule that there’s no point playing that out round by round.

The lizard-man fight is the first “close from long range” fight we’ve had. The PCs rapidly developed tactics to deal with shield-wielding foes. Well, for one, once they closed to within 240′, Eldritch Blast kicked in.

It’s a cantrip, so it does vigor rather than wounds as a basis. But it also does force damage, like magic missile, which means armor doesn’t protect and you cant take it on your shield, because force damage. This more or less makes it better in every respect than a longbow. No ammunition. higher damage roll, the damage type bypasses armor, and a gigantic range. I know I have to tone this down or provide countermeasures.

Anyway, the archers (short bow and longbow) and the Warlock keep up a steady stream of pain headed downrange, and by the time the lizards close to 100′, one of the lizardfolk is hit and his morale breaks. He flees, breaking the two-lizard shield wall and allowing the team to concentrate fire on the lizards. They have decent DR and high Threat DC from their shields, but dude, it’s six-on-one. But the second guy does manage to throw a javelin through Sunshine, who gets mad and delivers two crushing blows that either fell the lizard or damn near. At 22 vigor and with a shield, he’s a tough defensive nut to crack, but crack him they do.

After that, a few arrows and an eldritch blast at the fleeing opponent ends the combat.

So, I’ve been doing this for a while now, and I’m convinced Dragon Heresy is a solid foundation. There’s enough similarity with the parent system for easy entry. There’s enough differences that it’s its own thing. Those differences impact play choices, which is exactly how it should be.

This is not GURPS DnD. This is Dragon Heresy, an SRD5.1-based game that has some mechanical differences and distinctions that are holding up well in play. Honestly, while there are a few things that need tweaking (my team and I are having a serious discussion over the Rogue’s Sneak Attack ability, and the power of Eldritch Blast, a cantrip, makes us think about force damage, the Shield spell, and how strong a cantrip should really be), these things are tractable and relatively minor.
What’s Next

Well, of course Group 2 plays this coming Saturday. They’re a 7th level party going through a module written for 5e that I’m deliberately converting somewhat on the fly just to see if I can. These are, after all, playtest games. That group needs to head around to the front entrance, where they’ll be met by a new player. Yay, and yay for more women in the game.
As you probably read, I had a busy week last week. I’m well on my way to forming Gaming Ballistic, LLC. I have identified an editor, an indexer, a layout consultant, and +Rob Muadib, who has done an excellent job thus far in bringing The Book of Heroes as far as it has gone, will still be with me to finish the project, though at a reduced frequency of contribution because real life. I also got a bunch of quotes on printing books, and wow, if you do your homework that full-color, smyth-sewn hardback is damn affordable. Very reasonable stretch goal.
I also got the first color version of my map for the game (one of three), and HOLY CRAP it’s good. I may see how the cartographer feels about leaking a glimpse. But it’s good enough that I will be featuring it prominently in my Kickstarter video. Which I have to write and produce. But I have some friends, like +Jay Meyer of Great Northern Games, who have done this before. And I’m sure I can ping +Erik Tenkar about what he likes to see in a video, as well as others in The Industry for advice. I feel like I’ve not been an ass-hat to folks, and that is returning to me with tons of help and advice. +Amanda Valentine has been world class, as has +Ryan Macklin, in helping me out. +Alexander Macris is a gentleman and very generous to give me the nod to pillage ACKS for a few things.
This industry is filled with a sufficient quantity of awesome folks that no one will lack for advice, help, and guidance should they want to walk this path. Because as we all know, the best, surest way to make a small fortune in Independent Publishing is to start with a much larger fortune.
But that’s OK, because the availability of The Editor isn’t until late in the year, and so I get to slow down a bit (or really, just multitask more reasonably) anyway. I still have writing to do, but it’s mostly creative, not mechanical, so can be banged out with a minimum of fuss.
As the poets and historical figures Martin L and William S once said: “This shit just got real.”
(Martin Lawrence, not Martin Luther. And William Smith, not Will Shakespeare. Geez.)

3 thoughts on “Dragon Heresy Group 1: The Village is Secure”