I’m just going to do the druid here, because I want to do the fighters all at once. Remember the situation. A Druid (or other PC) is partnered with a pretty boring and unoptimized 5th level Champion fighter.

The Druid will be a complicated fight, I think, because I don’t fully understand the shapechanging and hit point rules . . . but I’ll give it a go.

The first thing I’ll need to decide is if I go animal form first, or second. The druid I wrote up is Circle of the Moon, so let’s throw down with fighters and brown bears and dinos, oh, my. 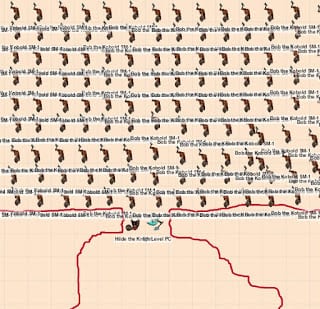 Hilde is a great-weapon fighter, armed in chain mail armor and carrying a halberd.

This is a knock-down, drag out brawl to the finish. The only stats Hilde has that matter are

So the basic, unbuffed OrcPower even without a friend is 13.


The circle and spells are not helpful to the fighter, so although Hilde provides a bit more than 13 Orcpower, there’s not much the Druid can do to buff that.

I’m not sure it matters, but lets use the animal forms first. While I’d love to go the all dinosaur route, I think a better call is to summon two bears and then change into the druid’s animal form, in this case an allosaur (though Polar Bear has strong appeal, the allosaur has higher HP, higher AC, and higher damage).

Circle of the Moon Revisited


I seem to have wandered far afield in my original writeup, so for clarity, here’s a new Moon Circle Hill Dwarf summary

Erupting Earth: This is an interesting thing, because if you just want to run away, Erupting Earth will seal the narrow opening that is the premise of the contrived environment. a 20′ x 20′ grid erupts to 20′ high – easily sealing the opening and letting the combatants settle down for a beer or something. We won’t do that, but it is a viable low-Orcpower, high survival strategy. Erupting Earth also does not appear in the PHB – it must be some other source.

Given 63 HP, the Druid will last as a human for 11 rounds. With 42 more as a Polar Bear, AC 12, this keeps the Druid standing another 7 rounds (6 if you have to change back rather than die). Total 19 rounds vertical.


The cure wounds spell cast at 1st level is 1d8+4, which is close to 2 extra rounds per casting. This can come at the end, so we’ll change into an Allosaur early on (8 rounds), and then buff the fighter a few times near the end.


The Druid has some big guns to bring out first, so he’s going to have to stand there for a moment casting spells and preparing the field. In order to have both combatants walk away alive, I used Erupting Earth, a spell not in the PHB but found in the Forged Anvil character generator. So it appears somewhere.

The Druid is in a similar situation as the barbarian, oddly enough – staying power due to lower rates of HP loss (or in this case, for the Druid, bonus HP for animal forms). The animal form isn’t quite as able as one would like, but this will evolve.

The dense packing of the foes make, again, for high orcpower counts when dealing with area effect spells. Still, even all melee with animal form, plus the Thunderwave (and not even invoking Call Lightning), you’re dealing with over 30 Orcpower just for himself, and the buffing of the fighter pushes the pair to 50. Another two castings of Conjure Animal would bring in another 16, so no matter how you slice it, you’re talking 65-85 Orcpower, more or less.

As seemingly always, the best thing you can do for offensive power next to area effect blasting spells (and truly, we have not seen those yet, since Fireball hasn’t been evaluated) is simply attack more often. The law of large numbers takes hold, and you will tend to be less swingy in your results.

The Druid is surprisingly strong in this situation. Against more dispersed foes, the animal form and allies may well be stronger, since you might be able to close the distance, kill a small cluster of bad guys by overwhelming them, and move on, perhaps taking no injury to yourself in the bargain.

4 thoughts on “Even More Orcpower (Druid)”