This is a shout-out to +Emily Smirle .

I fretted about my monsters chapter for Dragon Heresy. It was 91,000 words long, and a whole lot of problems.

Well, I chatted with Em and +GodBeastX , and they noted that the best way to do this was probably a brute scrape of a text file. Turn it into an HTML table.

Well. I thought about that, and how I would do that if I knew how to write code well (I used to know FORTRAN, PASCAL, a bit of MATLAB scripting code, and dabbled in Visual Basic, but not any of the newer languages).

So I used Word’s wildcard files to look for all instances in my Monsters and Foes file that used the “Sub-Topic” style (which is how almost all monster entries are titled), and then replace the monster [Name] with MONSTER – [Name].

That gave a tagged file. I gave Em a format, some rules for conversions based on information contained in the data already (Armor Class converts to Dragon Heresy concepts like so; Hit Points become Vigor; Wounds are calculated like so; etc.).

She went to town, and converted this:

Into this below, with a bit of Excel nudging from me. Ultimately, she has taken days of work and turned it into hours. 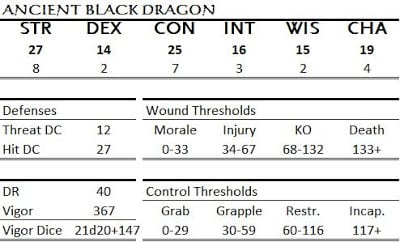 3 thoughts on “Glorious Playtester Report: Monster Input like a Boss”