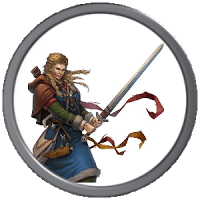 We mostly got our quorum for today’s game. The players and I had decided that this game would start at level 7 instead of level 1, to test out the mid-power game.

So whom did we have?

+Anne Hunter was Gudrun, a level 7 human runic barbarian. She carried a greatsword and a shortbow, and has DR 2 thanks to Unarmored Defense.
+Wright Johnson was Dakar,  a level 7 human berserker barbarian, who brought a greataxe and a longbow to the fray, with DR 3 from Unarmored Defense.
+Nathan Joy was Ka’Shyx, a level 7 dragonborn cleric of the Justice and War domain. He sported DR 6 from chain mail armor, carried a shield and a warhammer.

This was a test on several levels, and I explained to the players that I was deliberately trying to convert a bog-standard 5e adventure to Dragon Heresy somewhat on the fly. They were OK with this, so it was good.

I purchased the module – Palace of the Crowned Skull – from the DM’s Guild. It’s Pay What You Want, and I threw in $5. I took screenshots of the map and put them in Roll20, using Dynamic Lighting for the first time. I came up with a good way of quickly putting in the blockers, and honestly the hardest part is rescaling the maps.

I have a suggestion for the +Roll20 crowd for this, for what it’s worth. you should be able to define two squares, likely of about 20×20′ or even more, and say “the native image that’s being imported has 20×20 squares that are this big.” The squares will usually be (say) at the upper left and lower right of the map. Since both squares are 20×20 (four 5×5 squares), that gives a centerpoint for each, as well as four parallel lines in X and Y, as well as four 20′ lines in X and Y. The map can be centered, aligned, and rescaled accordingly to the grid on the blank Roll20 map. Poof, instant alignment and rescale, making a very tedious portion of the import process trivial. 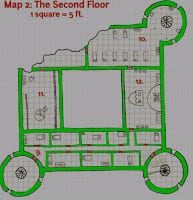 Anyway, the vision-blocks worked well, once I figured out a few things.

Playing through the module worked well. I dropped the references to the Forgotten Realms, and relocated the keep to a very convenient ruin on my own setting map. It fits so well that I really should contact Bill Volk about repurposing it for Dragon Heresy, but it’s DM’s Guild, so I probably can’t. But that makes for a pretty good test  run.

Anyway, the conversation with the representative from the noble family went easily, the players asked some of the right questions, and were satisfied with the offer of 800gp each for their efforts.

One thing we quickly realized is that we need a table of expected wealth by level. Not just because we were starting at level 7 so we needed to know what stuff they might be able to afford (can the cleric afford plate armor by Level 7? My Level 6 paladin was tromping around with +2 plate by then, but the GM was very, very generous with magic items and threw bounded accuracy right out the window). Armor is a huge deal in DH, as are magical weapons, so knowing what’s possible is key. I think I know how to resolve this! Roll once on the Hoard Table with a challenge equal to level – for a level 7 character in DH, at the low end it might only be 800gp. At the high end, it’s 4,200gp and two powerful magical items (rare or very rare).

They didn’t find any wild encounters, and traveled the roughly 60 miles to the keep in two days. It was easier to find with the provided map, and they made good time and did enough preparation to not draw any monster encounters.

They elected to come up the back way, and immediately encountered a Hill Giant on a large lower area of the castle.

They detected the Hill Giant first, and he was on patrol, walking predictably in circles on the platform, which was roughly 90×140′. They got a first-shot at the (Challenge 5) giant, but he wasn’t surprise (he had a good Perception roll).

The players immediately twigged to the right tactics – the two barbarians started peppering him with arrows, draining his vigor. Now, the hill giant had DR 6, so mostly could ignore the shortbow, but with two attacks (one of which could be used for aiming), the archers could vastly increase the odds of a critical hit, which made even the shortbow a threat. 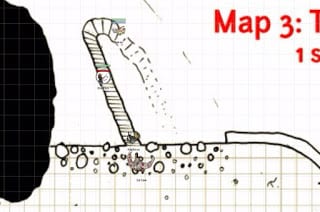 Initially, the giant pinned the players at the top of a narrow staircase, but then a good/lucky shot got through and caused a few wounds. This caused the giant to lose his nerve, backing off with the Demoralized condition.This allowed our players to flank him and spread out on the platform, while continuing to pepper him with arrows and the cleric used Sacred Flame a lot.

The giant retreated until his morale re-solidified, whereupon he attacked again.

It should be noted that he (and Dakar, for that matter) more or less didn’t roll higher than an 8, almost ever. The one time the giant did roll well, he was Demoralized, with disadvantage on attack rolls and skill checks, and so what would have been two shattering hits on Gudrun turned into “the mighty Casey had struck out.”

So they beat down his vigor and then went to town on wounds in hand-to-hand combat, mostly using flanking and good tactics to render the giant unconscious. They emerged unscathed, with 1 gp and 170 sp, and 965 XP each as spoils.

They did a bit more exploring, found a bit of treasure, including a potion of healing, and we called it a night. We played a bit less-long than we’d planned due to some confusion on timing. 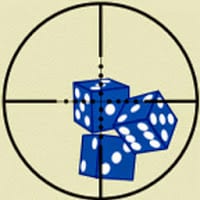 Was it an easy fight?

Yes and no. It went about as I expected it to go.

The hill giant was bad news, with 49 wounds required to kill him (but fewer required to demoralize, injure, and knock out), and 105 vigor with which to soak defenses. However, my experience here is that many-on-one, with the defender lacking a shield and the attackers well endowed with spells and ranged weapons?

Always, always bad for the one. The giant had to make use of frantic defense to turn wounds to vigor on nearly every ranged attack, though he probably should have just taken more shots, trusting his high DR to spare him from all but lucky shortbow attacks. Still, the three players really made with the pincushion syndrome, and there’s not much the hill giant could do about it. He’s too stupid to come up with clever tactics (INT 5).

He hit Ka’Shyx with a thrown rock, but he used his reaction to take it on his shield, damaging the shield (it was a fairly poor roll) with one “hit,” and three hits and it’s broken. Unless he has the mending cantrip to repair it, he can only pull that trick 1-2 times more, and then he’ll need a new shield.

On the other hand, he rolled really badly. Throwing rocks, he was looking at 2-20 wounds per rock. With his greatclub, two attacks for 8-15 vigor each. Even with 60-70 vigor, our barbarians (who elected not to rage, because of the exhaustion effects). So only a few hits, not even counting criticals, and our heroes would have been the ones on the short end of the stick. A few hits and the PCs would have been severely short on vigor, and one greatclub crit and you’re looking at 11-65 vigor loss, and if that also exceeded the Hit DC, that could double to “you’re at zero vigor and taking plenty of wounds through only DR 2 or DR 3.”

So again: it went as I expected. A couple of hits and it was bad news for the PCs. But they did not take those hits, and kept up a steady stream of vigor-reducing attacks. Had there been a few minions or lower-level guys to take up the slack, it may well have been very different. Heck, I bet two or three goblins would have occupied enough mindshare that the hill giant would have been a magnified problem.


The massive amount of work writing up stat blocks for all the critters paid enormous dividends. I was able to just look up “Hill Giant” and adjudicate the fight with a couple of glances at the table.

The adventure ports over easily and well.

The game still rewards sensible tactics that are intuitively obvious to players. Flank your foes. If your foes do not have shields and you’re many on one, hang back and pelt ’em with arrows.

High DR matters, and GMs and players alike should be encouraged to think about this. Take the time to aim when dealing with armored foes, as it allows you to increase your chance of a crit by quite a bit.

The emergent behavior of our giant becoming demoralized and then in a few rounds snapping out of it and pressing back to the attack works freakin’ great. That has been a real pleasure to see.

I still need to write up a quickie combat flow algorithm for maximum clarity. It’s clear enough, but you can never be too clear about this sort of thing.

Good session. The game still plays well, and I don’t think I need to adjust challenge ratings much. Fights may well end up “gee, we’re all OK” or “tomato paste” more frequently than the SRD5.1’s base assumption of everyone down a bunch of Hit Points.

Tomorrow will be a big writing day, and then pushing hard for the rest of the week to finish the complete draft of both books. I’m guessing 350,000 words total. Maybe two books of 250-280 pages each. Solid but not with their own gravity well.

One thought on “Dragon Heresy – Group 2 Playtest 1: Palace of the Crowned Skull”