Thursday is GURPSDay. We’re entering the last week or so of the Dungeon Fantasy Kickstarter. It fully funded during Day 16, about four days ago, and is still going strong. It looks to be pushing to anywhere from $135,000-165,000, but that’s not the full story, because ANY GURPS purchases count towards the stretch goals. One of those that has already funded is a second adventure (“Dungeon 2”). 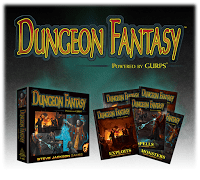 Below you can find the blog activity from the last seven days. I’m posting from Nakhon Ratchisma, Thailand today, aided once again my my lovely and talented wife.

Over the last week there have been 36 GURPS-related posts from our list of 63 blogs that have popped up on the radar screen as of Friday about 9am in Thailand, which is 9pm in Minnesota.