About a week until GenCon, so what’s kickin’ in the hopper at Gaming Ballistic, LLC?

To date, other than the 300 or so Kickstarter copies of Dungeon Grappling, I’ve moved 87 more via DriveThruRPG, of which nine were physical product. I’ve also sold 20 through my website, with a much higher fraction  (50%) procuring physical copies. My participation with the Indie Game Designer’s Network has moved a few more physical books (four, I believe). I have not sold a single copy through Amazon CreateSpace, and given how much of a pain it was to re-do the layout to their specs for active text and bleed (very large pain, with no help unless you want to pay them for a consult), I may reconsider doing that again. The print quality of CS did not blow me away, though it was a lot cheaper per copy than DriveThru. Case by case basis, I guess.

The Kickstarter itself broke even by the time all was said and done. I made a great looking book with solid rules content, paid for it all, and got it all out on time. I then ordered $662 worth of inventory. My revenue has been just north of $900, I think – which means that overall, Gaming Ballistic made about $300 in profit on a project basis.

I am, of course, substantially in the red as a company, because of things like paying for InDesign, hosting, and the remarkably non-trivial money of my own that has gone into Dragon Heresy in particular.

Still: Dungeon Grappling’s all-in profitability is on the order of 5% on a project basis.

I am still of the opinion that the Dungeon Grappling rules are very good for what they do, or at least the least-bad option of any I’ve encountered (unless as with many groups, you simply ignore grappling, which is the ultimate in rules-light play, I guess).

Which brings me to the Grappling Smackdown.

The Grappling Smackdown at GenCon

There are two sessions being run, from 10-noon on Friday and Saturday of GenCon. I allowed for six seats for each, and to my surprise and delight they’ve all been taken.

I’ve got a forked scenario under development, which if it goes as I hope I will definitely turn into a real product for sale. The scenario features a MacGuffin (go the the Ancient Ruins whose location Had Been Lost to Time and get some old and powerful scrolls; only super-powerful can read them, so they’re valuable in giving them to the client, rather than the “I’ll just keep this +5 Sword of Awesome for myself, thanks” option) and a few different pathways.

There’s a front door and a back way. Each has different challenges, and the “front door” pathway actually has a forking possibility right away. Each pathway features five challenges/encounters, not all of them combat, and even if it IS combat, a party wishing to bypass some of the combats can do so. Many, if not most, will feature the control point mechanic as options, and I hope to highlight some of the fun of the system with each one.

Grappling isn’t necessarily the answer by the PCs to each challenge, either. Even if one of the encounters is to get snagged by angry ropers, that doesn’t mean that the right answer isn’t a hail of fire arrows or a rain of swords and spells. But the grappling rules provide another axis for ending a conflict, and that’ll be on display.

Progress continues on this one, with David writing like crazy, and me doing editing when there’s something to edit. We’re starting to hit the point of synergies now, where writing one part of the document is made easier because other parts exist. This is excellent, and I get the feeling as a project manager that the thing is starting to take on real life and momentum in the mind of the author. 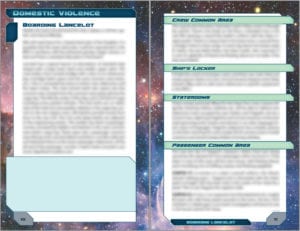 I’ve got Nathan Paoletta on standby, and once the first complete draft is in hand and edited, I suspect he will turn it around fairly quickly. A lot of the preliminary work was done a while ago, and rather than try and struggle to use InDesign by myself (my skills are improving, but experts are experts for a reason, which is why you hire them), I decided to simply engage Nathan to do the full layout. (There’s nothing new about the image to the right, but I’m still happy about the layout and design of the book, so there doesn’t need to be anything new.)

Everyone will be happier with this.

This means that when the time comes for crowd-funding of Venture beyond, the rules will be done, the layout will be done, adventure support will exist, and the only thing remaining is artwork and the cover. I’ve gotten quotes for an offset print run, and devised a strategy of tiers where as we pass stretch goals, that rising tide lifts all boats. More-sparse black and white art (meaning one piece of art per, say, two spreads) will transition to more art, and full-color at that. As the number of backers increases, there will be a natural transition where it’s less money for me to go offset than POD, especially since the offset will be sewn binding, 105# paper, and probably hardback for the core book, softcover for the adventure book.

I’m excited to bring these to folks. I think David’s got a nifty system with a neat twist to the resolution mechanics that are simple and fast, but not boring or with so little resolution to make things feel bland. Both David and I have learned a lot of lessons about design and play, and we’re doing what we can to bring that to the audience.

There is zero doubt that Dragon Heresy will be, as they say, “a big lift.” Three volumes, hardcover, and on the order of 250 pages each (some a bit more, some less). 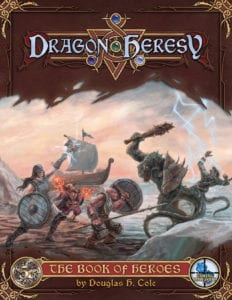 I have final copies of each of the three covers by Michael Clarke, and they’re freakin’ amazing. If you’re at GenCon, I’ll have a teaser flier there to give away, and would love to talk to folks about the game.

Editing continues, and progress is being made. There’s a lot of cross-checking Ken is doing, and he’s a busy dude. It’ll be done when it’s done, and not before. That’s OK.

Still, when that is done, and I’ve gone through and said “yes” to the changes, alter what needs altering, and rewrite or expand on what needs that too, what I’ll have is a fully playable game. Three volumes, with character creation, campaigning and setting history, and monsters and other opposition and fauna (and of course some aggressive flora as well), with maps 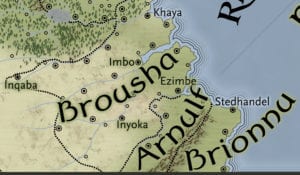 , some preliminary art for the introduction and races chapter by Gennifer Bone and Juan Ochoa, gorgeous covers, graphic design, and layout by Michael.

The thing could go to print with blank spaces nearly that day. In fact, I may consider something like that as a truly “this is what it takes to print the game” entry point so that (hopefully) no matter what, I can make something. I’m not entirely sold on that plan. But it’s worth considering. There’s a lot to like within the covers of that book, and fans of the OSR, Pathfinder, and 5e have all expressed approval at how it takes care of business. GURPS players have found it less abstract than (say) 5e, more tactically varied, but still fast-playing. New players have followed the character creation instructions and things worked out well.

So there we go. Nothing so dramatic as “Kickstarting on THIS DATE!!” but still movement is being seen, at a pace aimed at making a great product rather than rush-rush-rush something unfinished out the door.

I won’t lie: summer has been weird. My oldest daughter is just old enough now that her official bed-time is closer to 9 than 10, especially during the summer when she’s got camps and other activities at 9am rather than school at 8am. My younger daughter is in the “The Blood of Angry Men!” phase, waving the red flag of independence on top of her barricade each day at dinner, and again at bedtime.

(Remember how that ended? Yeah.)

This gives me remarkably little time to write each night. I am still working on how to deal with this.

On the flip side, my articles on the use of shields as an active rather than passive thing in various games (and in real life) have garnered some real attention. Noted living history practitioner Roland Warzecha of Dimicator reshared my article on his Facebook page, which brought a record number of folks – over 2,300 new visitors – to my site in one day.

I also gathered a few comments from Society for Combat Archaeology member Director Rolf Warming, and he provides some links to his own work.

There’s plenty of active discussion and disagreement in this area, so reading lots of folks’ take on it is a good idea. That being said, Roland is an old RPG player as well, and tossed down a few tongue-in-cheek references to old tapestries of using shields vs. monsters, as well as peole or monstrous people. That link also has a picture in the comments of four different ways to employ a heater shield via the very flexible strap arrangement.

In short: shields are cool and are under-served in many, if not most, fantasy games. You’ll see more on this from me over time.

Part of the dearth of activity is that my focus is on “below the waterline” admin stuff on the games I’m developing, so there’s much less to show. I continue my Monster Monday feature, as well as GunDay, though that’s been more sparse of late. I really need to get into a 5e game, but finding time for it would be a challenge. I know that the viking martial arts group that I participate in is full of gamers, though, so it’s really just a matter of time before that gets going.

I will definitely start up a playtest campaign once the Dragon Heresy manuscript is in prelim format. A set of no-art books might not be salable, but they’ll be great playtest fodder.