I was informed this morning that all 500 copies finished at the printer and were mailed to fulfillment on Wed Aug 22 (two days ago!). I expect that my partner in the UK will start doing their thing anywhere between yesterday and Monday. International backers will thus start seeing their stuff that following week (Aug 27-31), and even Australia should be 5-7 working days from that point.

For the USA, I expect (?) that I’ll get my boxes of books late next week. If that’s the case, I can print labels and package shipments over the Labor Day weekend when I’m not out at the MN Ren Fest dressed as a viking, and then folks should see books-in-hand by mid-September. 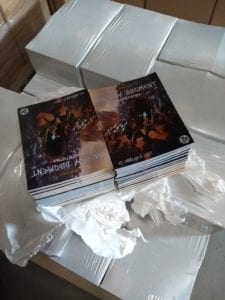 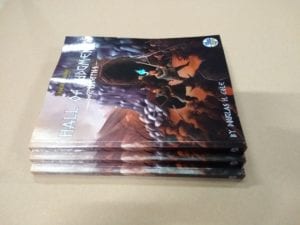 I’ll just repeat it here. Note this was written by Phil Reed, and that I had no notice that nice things were going to be said until I read them myself.

Posted by Philip Reed
Congrats, Doug, on a fantastic job on the new Dungeon Fantasy: Hall of Judgment micro-setting and scenario. The Kickstarter campaign that you ran went as smooth as any could hope for, and at the Steve Jackson Games office, we’re proud to include your work in the Warehouse 23 catalog!

For those of you who have not yet checked out Doug’s work on the Dungeon Fantasy: Hall of Judgment supplement, now is your chance! The PDF is available at Warehouse 23, and we’re happy to report that Doug was so good to work with that we’re currently considering possible future projects that he would create under license. No decisions at the moment, but we’ll be sure to announce here if Doug produces another supplement for use with the Dungeon Fantasy Roleplaying Game.