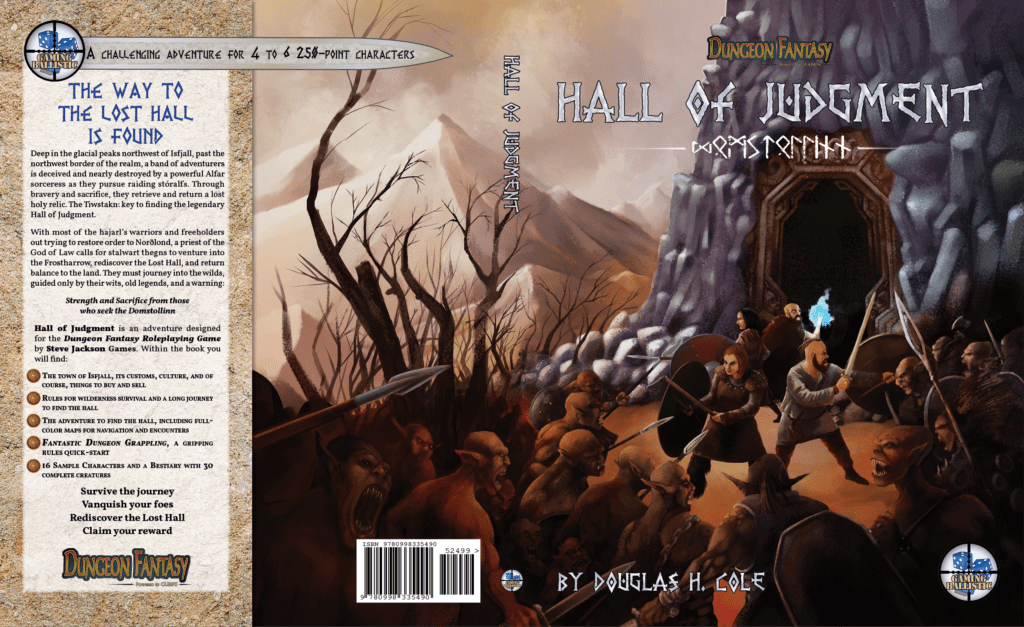 The new adventure “Hall of Judgment” is now available for retail purchase at the Gaming Ballistic web store and on Warehouse 23 over at Steve Jackson Games.

Hall of Judgment is set in the barbarian lands of the north (predictably called Norðlönd). It is designed to evoke the feeling of a nordic/viking culture without specifically invoking Norse myth and legend.

Preface. Contains a brief discussion of the original volume and how it came to be converted to the Dungeon Fantasy RPG.

Isfjall. The town is described in enough detail to serve as a base for further adventures.

The Journey. This section is broken out and expanded from the original volume. Random encounter tables, weather hazards, and other difficulties that arise when nature itself rises against you.

Lögheimili Ruins. A dangerous place. Full of evil it is. In you must go. A micro-dungeon! You don’t have to go in. Or come out.

Domstollinn. The core scenario. It is presented as a set of encounters that can be tackled (or not) in any order. An encounter includes a set of Challenges, telling the GM what must be overcome, Concealed information the players don’t know initially, Alternative ways to short-circuit, bypass, or otherwise not just Leroy Jenkins one’s way through a challenge, and Rewards, where appropriate.

Bestiary. Each monster that may be encountered in the scenario is given a description, statistics (including brief stats used with the Fantastic Grappling Quick-Start), and combat tactics to make each one unique. Over 30 creatures, nearly all of them new.

Fantastic Grappling Quick-Start. Even if you don’t have the book, you can still use the rules. Two pages of grappling the way it should be: fast, fun, and well-integrated with the DFRPG mechanics, using the control damage type first introduced in GURPS Martial Arts: Technical Grappling, but refined and simplfied after years of play in multiple systems.

Pre-Gen Characters. Sixteen 250-point characters will be provided to allow the scenario to be played with minimal preparation; this adds to the excellent pre-gens already provided in the DFRPG boxed set.

All together, this is a complete adventure that can be run on its own or dropped into an existing campaign.

2 thoughts on “New on W23 and Gaming Ballistic: Hall of Judgment”