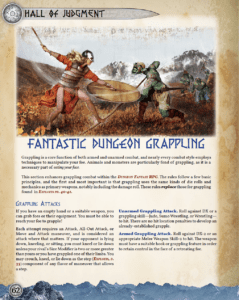 I got a sometimes-rare opportunity last night – I got to use the rules I’ve written in the core of their design intent. In this case, it was the simplified and upgraded rules for grappling that appear in my recent Hall of Judgment book: Fantastic Dungeon Grappling.

These took the method of GURPS Martial Arts: Technical Grappling, and seasoned them with lessons learned from DnD5e and Dragon Heresy. Unlike TG, which take 50 pages to do what they set out to do, Fantastic Dungeon Grappling (FDG) does it in just shy of four pages of text. That includes art.

Fantastic Dungeon Grappling is designed to be three things, and where that intent is the same as the original Technical Grappling, to improve them over the original.

I’m not going to belabor the point: mission accomplished here, both for the player and GM.

Do Not Talk About Fight Club

The character I brought to the table was 275 points, in a game that can be described as “psionic A-Team” in a nutshell. The point value is less important than the actual fighting skills on the table, of course, which were:

So automatically, when it comes to damage and potential damage, both skill and damage suggest I grapple. The Parry scores (Parry-10 for wrestling, Parry-9 for brawling) were unspectacular.

We were using options from GURPS Martial Arts, and as this was Action-based, not Dungeon Fantasy RPG based, things like Joint Lock and Committed Attack and other options were on the table. Each of those would require an on-the-fly adjudication of how to do it.

The bouts were 1-1 fights in a smallish ring (literal ring). The first foe was one of the “Dudebros,” who were described as frat boys out for some illicit fun (illegal drug-money fueled fight ring). I found out later that this particular guy had Brawling-12 and little else. The second foe was faster than me, and presumably had higher skills. 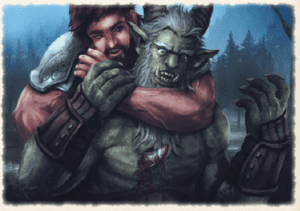 I don’t recall enough of the session’s details for a play-by-play, and in fact it doesn’t matter much.

In the first fight, Dudebro rolled poorly on his “life-prolonging decisions” internal chart, and did a full Move charging me. This was the first round in the single elimination fight, so no one had an opportunity to see how others fight. He moved to 2-hex distance. Nice. I did a Committed Brawling attack – step in to Reach 1, kick, and step out. I missed.

We exchanged a few blows, and the relatively low parry scores kept that tense, which was good. My character has psionic DR 4, but I played him as if he didn’t, as a tactical choice, so as not to give away my ability to take a hit in later elimination rounds.

Eventually, he All-Out Attacked, and I was able to lunge in and grapple Dudebro’s leg. Dudebro had really, really poor attack rolls after that, especially in the first few rounds, and made the mistake of trying a lunging kick with his non-grappled leg. He missed, and went prone. We improvised Joint Lock rules (in fact, in retrospect they were indistinguishable from a regular grapple, so no real “new” stuff there) and I simply was patient and built up control points until Dudebro was at 16 CP (which was actually 1 higher than my maximum CP, but it wouldn’t matter). I did a forced position change (ruled it as -6 from TG basis) and rolled him onto his face, and then I applied Agony (risking 10 CP) and tapped him out. It helped me a great deal that he was rolling vs DX for grappling having entered an MMA contest with zero skill in it. Oops for him.

The second fight was over even more quickly; we evaluated, he kicked twice, maybe hit lightly once (DR absorbed it), and I kept trying Grabbing Parries (again from TG) at -3 (-2 for aggressive parry, -1 for leg) until I got one, then I did an actual Takedown. Having seen the result last time, the other guy failed a Fright Check and effectively gave up. 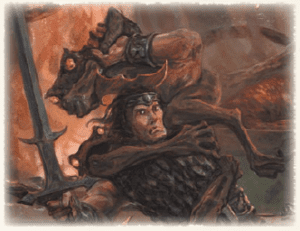 The interesting thing here is that the play of the fight was fun, fast, everyone knew what was going on, and it had just the right amount of tension. In the first fight, with better rolls, Dudebro could have easily broken the fairly mild grapple and freed himself. He could have (and should have) punched at me, being only -1 to skill in the first moments of the fight. The CP for “normal human” ST did not ratchet up ridiculously fast, nor was it an exercise in boring repetition of 1-point increments, and why don’t we just pummel each other anyway?

Turns out, Arm Lock/Joint Lock isn’t really required at the level of abstraction being used. We effectively ruled by silent agreement that he couldn’t use the locked leg at all and that the joint lock enabled a pain compliance move. I risk CP, make an attack roll, and he rolls HT-based Will to see if he can resist. He didn’t so he tapped. Boom. Rolling someone on their face we handled with a rule from Technical Grappling, but in retrospect making position changes a special case of Takedown would have invoked even fewer rules (though in effect, both are quick contests anyway, so really the mechanics are the same).

Had I gone for a leg cripple (and in the second fight I did exactly that, but the other guy critically succeeded his defense roll, breaking my grapple, but he just gave up after that; walking is underrated until you realize the other guy might make you limp for life) it would have just been resolved as per Injure the Foe.

I feel like there’s a nice sweet spot here. I have enough categories of “stuff to do” that most common grappling options fit within them with little fuss. I could have invoked the “spending CP” rules a few times had I feared the results of the foes’ attacks, but didn’t because my psionic DR made me pretty much immune to hand fighting. I was able to invoke Aggressive Parry, Takedown, Joint Lock, Change Position, and Injure the Foe, and the rules that weren’t explicit were easily extrapolated.

A bare-bones NPC with my stats would have been about 125 points – most of that in DX and ST. A combat-focused pugilist. Lower point values would require patience, Telegraphic Attacks, All-Out Defenses, and (probably most importantly) the expenditure of Fatigue Points for Frantic Defenses, which is a staple of inefficient fighting. That’s important, and provides the proper verisimilitude for the nature of the beast.

I was thinking that were I to re-do Fantastic Dungeon Grappling into “Technical Grappling, 2nd Edition” that I’d need to cut down the penalties on the CP chart . . . but I’m no longer sure that would be required. The other guys rolled badly in many cases and failed important Will/Fright checks, so the impact of a few control points early in the fight was magnified, perhaps to an extreme level. Against slightly better foes, there would have been a lot more back-and-forth play.

So if you want to spice up the grappling in your real-world games . . . the four pages of Fantastic Dungeon Grappling in Hall of Judgment might be just the thing!