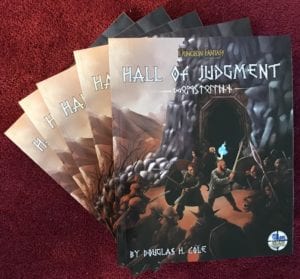 If you don’t have a Cleric in your party, specifically one with Turning, you might not need this. But if you do, or just want to make the standard 250-point Dungeon Fantasy RPG characters work a bit harder to kill undead in Hall of Judgment, consider the following.

The undead play a role mostly in two places in the book – the random encounters, and the village of Logiheimli. In fact, it’s fair to say that they’re the primary threat until you hit the Vesturham mountain range.

The easiest way to make life more interesting is to focus on faerie and humanoids up until the village. The first threat zone north of Isfjall might be bandits, and the bandit camp. Then as one journey’s north, usually within 10 miles of the Vesturham range, running into all manner of faerie is to be expected. Plus the weather. And various predatory fauna.

Even so: undead should be cool and scary.

Here are some ways to spice up encounters featuring Undead foes.

Cursed Hall. The undead spectral bears either have Resistance to Turning, or they’re actually Faerie rather than Undead. The jarl was subjected to a Faerie curse, after all. The spectral bears could easily be a different class despite looking like ghosts. 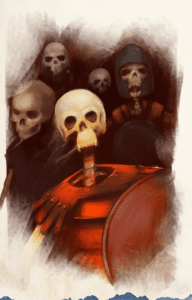 Death Valley. The biggest thing you can do here is throw veritable mountains of undead at the party here, all of whom get an (arbitrary and against the rules) boost of +3 to their Will rolls for Low Sanctity vs Turning, as well as resistance to magical, druidic, and sanctity-based effects. Ensure that the necromancer doesn’t go in for half-measures: if skeletons arise, they do so in units of a dozen. Other types of undead such as zombies should be present, and the skeletons in particular should be armed with spears, axes, and stones to throw; if you can rationalize to yourselves how a skeleton would keep and preserve a bowstring, make that happen too. Ranged weapons are simply critical to keeping a threat real.

Skeletons. As above. Lots more of them, plus ranged weapons. Either that, or replace this encounter with one or more Vaettr with associated zombies. As before, they should have spears for throwing (they can toss to 13 yards at full damage, and 20 yds to half), and if you really want to have fun, give them spear-throwers too: 26 yds to 1/2D and 40ish yards max. And sw+1 imp damage is nothing to sneeze at.

Vaettr. These guys can be tough, as they have decent Will (14) and have and will use Tactics. They can create vaettrhrogn zombies by killing foes, and there’s no upper limit stated on how many they can make . . . so have them show up with several squads of mixed-armament zombies who attack intelligently. Heck, give them zombie cavalry with lances, thrown javelins, and shields mounted on zombie warhorses.

The threat in Logiheimli proper is ghouls and skeletons. The barrows contain mostly skeletons. These need better tactics than I used in my games (not hard), or a boost to Will to prevent them from being simply rounted by the net Will-16 to Will-19 of most Turning clerics.

Ranged Weapons. While skeletons are not IQ 5- and therefore not mindless, treating them as dedicated warrior-spirits that can and will maintain their equipment if they have it is a good first step. Skeleton archers deal impaling damage while at the same time being Unliving, and therefore less vulnerable to that same damage type. They’re also very fast (Move 8), so these Harryhausen skeletons should make the most of hit-and-run tactics, rather than just standing and fighting. They’re IQ 8/Will-8 . . . but that means dim, not incompetent. Having them mostly All-Out Attack will allow targeting nasty bits on the players, and honestly, they’re only going to be wheat for the reaper vs 250-point PCs anyway. The ghouls are a lot slower and weaker; they need to get in close to use their paralysis main attack (but if it works, it’s a significant crimp in the style of the good guys). 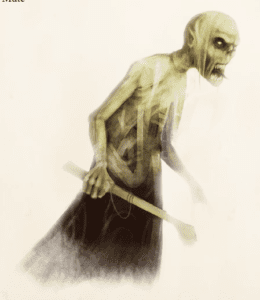 Paralysis Done Right. The description states that if a ghoul hits or parries with its brawling skill, it can paralyze the target. It explicitly says armor and shields do not protect, which somehow I missed in play, because while I thought that was the right thing, I hate pausing the game to look through books. In any case: they don’t protect. The only way to not get affected by this attack is to dodge. In fact, it would be entirely in keeping with the nature of the power to have a successful melee attack on the ghoul by the characters also force a HT-2 check for paralysis. For most PCs, that’s a roll vs 10 to 12, so while a ghoul is likely to be felled by a single blow from a melee front-liner, there are twelve ghouls, and they should swarm. With a bit of ranged-weapon love (throw sticks, stones, axes and knives at the Cleric to break his concentration, then rush in all at once) plus the “U Can’t Touch This” MC Hammer attacks, you’ll need ranged weapons to do this, and they’re Unliving too, so unless you have cutting arrows (prominent in GURPS Dungeon Fantasy but less so in the Dungeon Fantasy RPG), this encounter can get nastier.

Oh, Vaettr. Another great way to go here is to replace the ghouls with Vaettr. The cultists that set the ritual of the stones were themselves destroyed by it, which they did not expect and which would piss them off. Even more nasty would be to have some turn into Raiðr instead, which are basically Vaettr that can cast spells. If each ritual required several vaettr/raiðr, and they’re trapped in the village (or not!) by the power of the stones, the village could be a tough nut to crack. For convention games where playing through in four hours will get you from Isfjall to Logiheimly and not much farther, this is an outstanding way to make the battle at the Temple a climactic one.

Much of what I wrote about dialing down the power of Turning is still valid. But it’s not the only way to go, and one can leave it as is just fine if you adjust the tactics of your foes accordingly.

There’s a place for mindless undead that just come up on you, and are easily dispersed by a Turning cleric and a powerful sword arm. The best place for those, as noted in the previous article, is when their target is not the PCs. There are fifty houses in a local village, and the PCs can only protect one at a time? Yeah. There we go. But if the party is basically “pulling aggro” on all the baddies in the area, they’ll have to be smarter or better equipped to make any sort of pucker factor on the character’s part.

Hall of Judgment is, now that I’ve run it as written for the Dungeon Fantasy RPG, a really good adventure. There’s a lot to it and a good GM can really make the most out of it. I’m only a mediocre GM, but you can take the advice above and punch up the value of the encounters that you have in a convention setting.

Why mention the convention setting?

Quite simply: time constraints. With HoJ as a multi-session campaign, you can afford to game out nearly each day. In the Lowlands, you’ll roll on the encounter table roughly five to seven times if you do it daily as recommended. Half the time you’ll encounter an animal (predator or prey). 1/3 of the time it’s a “location and weather” encounter. Only one time in six (so basically an average of ONE on the way to the village) is combat/conflict. If you have lots of time, you can do whatever. If you have four hours and some folks who have never played GURPS before, well, I made some choices

3 thoughts on “Cooler Undead Encounters for Hall of Judgment”