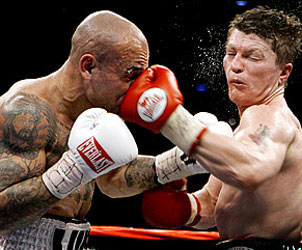 Still, the reality of it is that in a match of fifteen three-minute rounds, that is, a whopping 2,700 turns in GURPS, two combatants of moderate ST and fitness (say, ST 13 with Boxing at DX+2, even with boxing gloves (see GURPS Martial Arts, p. 233) will be rolling 1d-1 cr on every hit, with the +2 per die damage you get from Boxing canceling out the -2 you get from your gloves. In short, three or four successful punches and your other guy is flirting with kissing the mat.

But wait, you say. These guys are throwing a lot of defensive attacks, which means that the above guy is probably only rolling 1d-3 cr instead of 1d-1 cr. OK, so? You’re still looking at 2,700 turns, with Boxing-14 you’re looking at a 90% chance to hit, and about a 75% chance to parry (assuming a retreating parry, defensive attack, no Combat Reflexes). Let’s say one hit in four does damage, and you only do damage half the time (1d-3). So one turn in eight you take 1-3 points of damage. You’re still looking at being KO’ed in the first round of the fight nearly always. If you stick with it, you’ll probably die by round two or three.

Now, not to make light of the punishment a real boxer can dish out – these guys hit hard – but boxing just isn’t that deadly. I think what’s missing is a chance for a fighter to brace him or herself against even as successful hit.

Roll with it, baby

Fortunately, GURPS provides one way of doing this, but it’s a cinematic technique: Roll with Blow, (Martial Arts, p. 87). Roll skill-2, and you can cut the damage in half . . . but you double knockback. This only works on crushing attacks, which is fine with me.

What I’d propose playing around with is a way to actually eliminate the injury of a crushing blow with a HT-based roll. But how?


One way to do it would be to make a HT roll whenever you’re hit with crushing damage, and your margin of success reduces the injury. Not the shock or knockback or the need to roll for Knockout and Stun if you get hit in the head, but the injury would be reduced.

Yes, right. I’d definitely use the damage inflicted as a penalty to the HT roll; not full damage, though. Maybe half damage.

I might even double penalties if you get slammed with a Parry 0U weapon like a mace – but let’s hold off on that for now.

DR subtracts right from damage, so no need to double-count that.

Wearing Boxing Gloves: He hits for 1d-3 on a defensive attack. His doppleganger foe will roll at no more than -1 to HT, and often soak a point of injury.

Barehanded and Regular Attack: Now he’s 1d+1, which means his foe rolls at up to -3 to HT. Most often, he will not soak injury.

With a Light Club: A baton does sw crushing, in this case a straight-up 1d+2, which is up to -4. A barehanded boxer isn’t much less dangerous thanks to the generous damage bonus from Boxing!

Mace: Now you’re facing 1d+5, looking at up to a roll vs HT-5 to soak damage, so even your HT 14 guys will mostly just take the full amount if they get lucky.

Treat as a Parry


Another way to make that roll would be to make it based off of something like 3+HT/2, which mitigates the impact of high HT a bit. Our HT 12 guy would only be rolling vs. a 9 usually, meaning he’ll only avoid injury by getting lucky. At HT 16, you’re looking at an 11, so on the average, that’s worth about DR 1 against a boxer’s defensive attack as above. Against that guy with a mace, that -5 penalty means at HT 16 you’re rolling against a 6-, meaning that 90% of the time you take full damage.

Only applies to fists and padded weapons


One way to make the advantage of using weapons that are harder than the surface you’re striking plain is to basically only apply this mitigation roll to fists and feet. So facing weapons, you take full damage, no roll allowed (which has the beneficial effect of not slowing down or altering weapon combats).

I’d probably combine the roll that allows you to mitigate action point loss in The Last Gasp with this same roll. The injury avoidance has the penalty of half-damage, and the AP loss reduction is capped at -4, the same as the shock penalty.


I think it might be interesting to also try one of the following.

Perhaps allow All-Out Defense to give that +2 to any one defense to also give +2 to flat HT-based rolls, or even +4 to the Parry-like 3+HT/2 roll. So if you go defensive, you might even just be able to clench up and take it.

Another option would be sort of an active defense option: if you forgo a parry or block, and choose to just clench up and take it, you get +1 or +2 to the roll.

GURPS turns, the lack of a real impetus to Wait or Evaluate in the basic rules, and the generally high nature of even punching damage means that lasting through a full round (again, 180 turns per round!) is virtually impossible.

The perceived problem that this is trying to solve is that boxers and other barehanded fighters just don’t wind up dead or unconscious in the first round of every fight.

Well, no sane person would play through 180 rounds of combat anyway, and this would be a good moment to invoke some sort of “OK, you both took either Wait or Evaluate, so 3d seconds later . . . “

Still, the number of blows that would successfully land means few fights would last long enough for the round-timer to sound. If we don’t change GURPS’ basic damage structure, then mitigating the damage of a successful blow is sort of the only option.