When last we left our heroes, we’d just had the screens fall to reveal a staggering number of new foes in the middle of this final combat of the adventure. 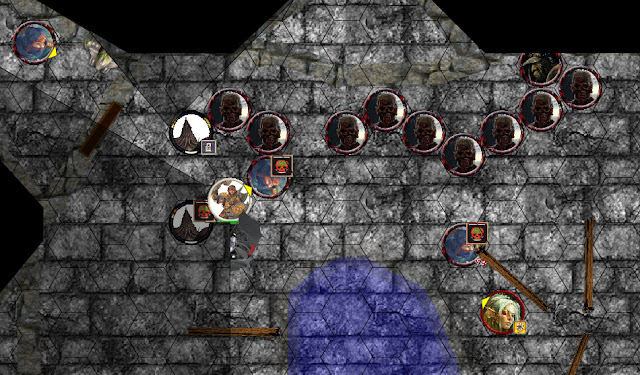 Dawn was stunned for a single second, we were looking at ten or so angry zombies, and a runecaster and some other BMF (an Oni) were threatening us, along with two metal animated statues (golems) with surprisingly sharp swords.

Soon after we started up, as we faced the Zombies, we quite literally heard the pitter-patter of Ninja feet, and while Thumvar was able to sacrificial parry for Staver, Michel took 11 imp to the vitals pretty much right away, mortally wounding him and incapacitating him for the rest of the four hours of fighting.

Thumvar had been Great Hasted (two maneuvers per turn) late yesterday, and so things got very dead when he was around. Still, he could only save one of them.

We noted that with invisible/stealth ninja All-Out Attacking us to the Vitals from behind, we should all invest in DR 14 pectorals immediately.


Cadmus’ turn rolled around, and he invoked Enhanced Protection from Evil, which forces a Contest of Will+10 for Cadmus (24) vs. a Will roll from notionally each bad guy. Cadmus makes his roll by 16, and Nate more or less handwaves (or they just roll equal to skill) the opposed rolls, and that means that no “malign supernatural being,” which includes demons and undead, cannot approach within 16 yards. While it’s tough to see on the screenshot, there is basically no place within the combat map that is closer than 16 yards, so this more or less nullified most of our opposition. 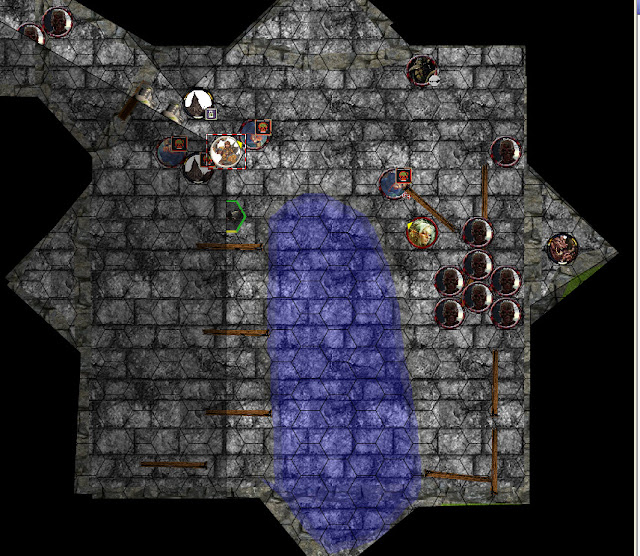 The Oni freaked out a little and launched an arrow at him, which Cadmus blocked . . . but the arrow exploded into flame, setting him in fire a bit. But every ninja and all the zombie vikings burned rubber getting outside my effect radius, which they could not do. They fled at some crazy Move, too – they were Fast Zombies, but they never came into play.

Apropos of Nothing: Smite and Protection from Evil are just “I win” buttons in this context, It turned what should have been a frantic, desperate fight which was made worse by our neglecting anything resembling a fight plan or tactics into a near walk in the park. I’m sure Nate is thinking about nerfing some of these abilities either now or in the future.


Cadmus slowly moved to the Coi pond to extinguish himself, Thumvar basically pulled out his flail and started pounding the crap out of our two golems. This was vastly aided, and a life saved, perhaps, by two pieces of unfortunate golem luck: 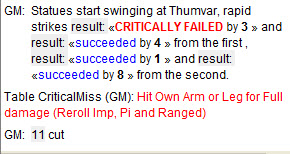 The first biff chopped into the golem’s leg; the second managed to unready a weapon, which wound up saving Dawn from a serious injury later.

In any case, without a blow-by-blow, Thumvar beat the tar out of these guys while Great Hasted. It was a fairly mechanical task, and Thumvar was perfectly designed for it.

Serious Flaws Revealed in the Undead

Then between Dawn and Staver, they double-teamed the runecaster, with Staver doing his usual Heroic Archer bit, and Dawn providing great help by decapitating the guy. 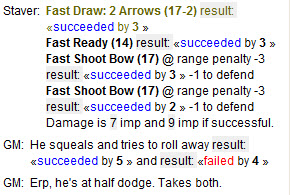 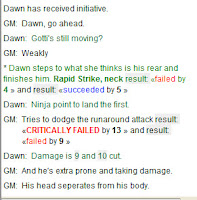 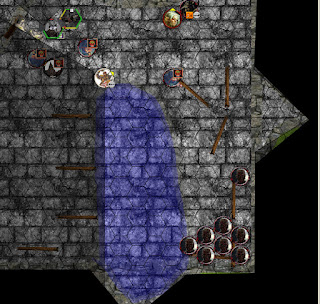 At that point, with the runecaster’s expiration, all the Zombies up and died all at once. This was noted as a serious flaw in the design of these undead servants.

I’m not Dead Yet


The last credible threat was the Oni, who went by name of Kimandatsu. He couldn’t get within 4 yards of me, which was enough to bring him within Cadmus’ Smite range. That would have gone better had Cadmus not been on fire, and he had to roll himself into the Coi pond to put himself out.

That worked, and he was able to get in one or two submerged Smites – 2d irresisitable burning damage within a 4-yd radius; the biggest benefit there was snapping “Kim” out of invisibilty, which led to most of us trying our luck at killing him.

I think most of us managed to get a small piece of him, whereupon Thumvar finished up with the iron statues, Heroic Charged over to us, and hit the Oni for 18 cr damage.

He died, fell over, froze the pond, and then shortly after, called us fools and woke up.

Next adventure, we shall remember sooner that we are in possession of a Demon-killing sword of awesome power.


One bit of inside joking: the new character that replaced Brody is a transcendantly good looking ninja
nymph. Who stores various items, including a six-foot staff, in N-space. We unanimously decided that she’s pulling all of this stuff out of her cleavage. This led to a bit of joking about this (literally) stunningly good looking (stripper) ninja babe riding into combat on a dinosaur wielding a demon-killing flaming sword. One of our players (Emily aka Bruno) sent out a picture.

We decided the fact that Dawn must hide all that ninja stuff and draw it from her ample bosom was the best excuse for the Cleavage Window ever.


This was a fight we should have probably lost. Badly. And we still might, and we did lost Mark’s character to an unfortunate early-game shanking incident. But we should have been pretty systematically disassembled, I think, just based on crappy tactical choices alone.

But Cadmus’ Protection from Evil (Enhanced) is just an “I win” button. Smite is just about as bad. That is actually a bit of a complaint, and Nate and I mulled on how to nerf it a bit.

We’ll see what happens for the rematch. Dawn will employ her sword to better use, I can likely keep Kim away and occasionally Smite him, Thumvar will do his usual damage, Staver may or may not help, given that these stupid demon critters tend to be stubbornly resistant to impaling damage.