We picked up where we left off in +Nathan Joy‘s game.

. . . Cadmus was praying, others were standing or hovering around, and a dragon that could move through ice like it was yogurt was, well, moving through the ice like yogurt. 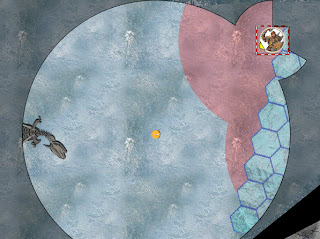 It burst through right under Shiba ( +Mark Langsdorf ) and Thumvar ( +Theodore Briggs ), both of whom avoided the attack, Thumvar rolling a critical success. The dragon got to roll on the Unarmed Critical Miss table, and went sprawling. Staver shoots arrows at it, laced with alchemical fire. Thumvar does a double attack and totals 27 (2) cut. Shiba pounds it with another exploding arrow and does 9 imp and 10 bu.

Cadmus continues to pray to Pharasma that the dragon not be able to escape and burrow into the ice again. After a few seconds of this, a sense of peace descends on him. He also hears something rattle and hiss off in the direction to his left.

Thumvar nails him with two more blows, and Staver ( +Emily Smirle)   hits with two more fire-arrows. Dragon drags himself off into the fog, and we lose track of him.

After a second or so, the dragon nails us all in a huge cone of solid cold. Cadmus is at the edge, and Dodge and Drops out of range. Thumvar gets out of the way, Shiba blocks the cone with his peshkali shield, and Staver eats 20 cold damage, which amulets and armor modify down so that he’s only at exactly 0 HP.

He doesn’t pass out. He does drink potions.

Now, for the undead guy. Cadmus stalks forward . . . and the dracolich nails him with a a torrent of black ice. He gets hit for 17 burning damage, but his large-area DR (he learned from previous adventures) is DR 10 (DR 12 on head, neck, and torso; DR 9 on limbs) and he “only” takes 7 burning damage. He’s injured and frosty, but still fighting.

Cadmus recalls (after spending a destiny point to un-biff his roll) that these creatures can’t do their cone attack every second, but they can do it quite a bit. He then attacks the thing’s skull with his axe, but is parried. Meanwhile the dracolich attacks him with both claws and his teeth; cadmus does a riposting parry, a shield block, and a dodge to avoid all three attacks. Staver tries to attack the skeletal dragon with fine meteoric arrows, but suspects that the impaling arrows won’t hurt his foe much. 8 (2) imp and 11 (2) imp to the vitals, such as they might be on a living dragon. It doesn’t bother to dodge, and doesn’t look like it’s hurt much.

Cadmus takes a turn as his compatriots gather to fight the dragon, and chops at its neck, hitting once for 10 (2) cut. It launches itself into the air, and moves FAST behind Cadmus. Thumvar flies past Cadmus’ field of view. We all overhear Thumvar muttering about how fast the creature is. Meanwhile we hear a loud crash and a sliding sound, as something seems to hit the ice and slide for a long way.

We then all hear a dull, echoing thud from somewhere up ahead, sounding even farther than the sound of the sliding.

Cadmus wonders if it slid into the crevasse like a big bony dummy. We find out that in fact, he body slammed the dead dragon into the crevasse, and either also went in himself, or is no longer anywhere to be found. Staver checks it out:

You look, and other than a carpet of coinage lining the dragon’s former nest, we see fresh blood indicating a large corpse was very recently dragged to the south of the crevasse where it vanishes under the side of the cave wall. Beyond that is a VERY tight fit you are a bit nervous about continuing down.

Strewn with bones, and the very bottom narrows into a wedge so you have to stop before you’re actually at the true bottom. You see a roughly two yard wide semicircular hole that you’re guessing a dragon could fit through if he squeezed. The edges are smeared with blood just beginning to turn tacky.

Cadmus kneels down and prays, long and fervently, to Pharasma to open the way for us. Widen the cave, block the exit, mark the path. Show us the way to this stinking undead for whom you have no tolerance, etc. 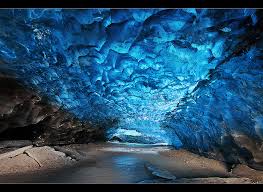 Cadmus’ prayer slowly draws to a close. There is a shivering CRACK that seems to come from everywhere at once. You all hear the squealing of ice moving over ice. Followed by a series of pops.From the cave mouth, and the tunnel, you hear another splintering crack, a deep silence for a few seconds, followed by a resounding boom of a large amount of ice hitting something very hard. Thumvar is slighly crouched in the tunnel mouth looking back at Shiba having a conversation with Cadmus, when there is a huge CRACK, and you see fracture lines race up the sides of the wall. You turn to look down the tunnel, and have a slight moment of vertigo as the tunnel seems to tilt slightly.Then the whole of the tunnel starting about a foot past your nose drops away, eerily silent, and in front of you is the main shaft of this chamber. You watch several hundred tons of ice pinwheel away below you to smash on the rocky crags hundreds of feet below. There’s a faint creaking, followed by several smaller pops coming from within the ice.Then silence.

We stare at the new geography, and wonder where our two dead dragons went. They could be anywhere in the complex, or buried hundreds (thousands?) of feet below in tons of ice.

We decide to break until next week to let the GM draw new maps!

One thought on “GURPS Jade Regent: Enter the Dragons”