I’m gearing up to play in a DFRPG/DF game (I think DF) with Christopher Rice. My character will be a classic Elf Scout, with an extra 100 points baked in from the start for Reasons. He’s definitely a bad-ass.

That being said, the way that you pick disads in GURPS can be rough. You need a lot of them even by default at 250 points, with the basic templates calling for-50 points in disads, which could be as few as 3 15-pointers, or as many as 10 5-pointers. That can be a lot of boolean menu-picking.

The issues usually comes in, for me, in the number of them I have to play. The current guy has about 100 points of disads. Some of them are racial and have to do with the campaign background as an elf. Some are job-related as not just a warrior, but a leader of warriors. Some of them are pure characterization. Each one adds something to the character, but there’s a lot to keep track of, and many are similar.

This won’t surprise anyone. Similarly-themed disads are a LOT like Aspects in Fate. They define how you act, both good and bad. In “Pointless Looting and Slaying,” Sean Punch put in “Heroic Flaws,” of which you take five. Each is a short, pithy statement that is basically a weak Aspect. As I know Sean either plays or has played Fate, I’m somewhat sure this was intentional.

But the concept of having 3-5 things that drive your character makes a lot of sense if you’re forcing yourself to write down or codify your behaviors for the purposes of tracking in a point-buy system. If OSR guys find themselves grunting “just roll 3d6 in order and go kill some orcs, for f**k’s sake,” this is me acknowledging the value of your character is what your character does, go play it.

Still, what I realized as I looked at my paper dude is that he really has a few archetypes going on here.

Duty and Honor. He feels honor-bound to respect, protect, and watch out for friends and foes, within limits. As a soldier, he trusts  comrades in arms with your life, and expects the same. He will fight to kill any enemy, but respects opponents nonetheless, acting with honor even among extreme violence. His blood-kin are his lifeline and reason for living, and strives to be worthy of the respect they’ve given you”

High Strung and Lethal. Combat is for keeps, and he’s been born and bred for it. He’s impulsive and bloody-minded, and has run into too many foes that regenerate or otherwise won’t stay down to not ensure that each foe is down, permanently. Living and training among a society of powerful magic-users means he uses injurious techniques without much thinking about it, since, well, when he was a kid, the training master was a ridiculously powerful mage that would just make it all better.

Damn Elf. Dragons and their kin hate me, and I hate them right back. I glow with unmistakeable power, and that power makes me think I can do anything, and especially do more than those damned city-dwellers. I’m right, of course, but with patient teaching, one day they’ll learn something. One day. For some reason, this attitude rubs folks wrong. Who knew?

The first and third each encompass something like 40 points in traits; the middle one is maybe 20. But they’re a darn-sight easier to remember than the traits that make them up individually.

Sean’s article from Alternatte Dungeons (Pyr #3/72) may be one of my favorite GURPS articles of all time. The general concept in reducing the required granularity of choices by making each one more meaningful (and “Under the Hood,” the component GURPS parts are all there) is something I would have LOVED to see as a different way to approach the Dungeon Fantasy RPG.

For Disads, treating each Aspect or Heroic Foible (to borrow both from Heroic Flaws from #3/72 and a term for something similar Christopher used in the Ceteri campaign) as basically the equivalent of a 25-point cluster of disads, and scoping them so they’re about that influential, means that you can create memorable characters with a minimum of fuss.

Indeed, the division in Pointless Looting and Slaying of stuff you can do into Major and Minor abilities (roughly 20-25 and 10 points, respectively) keeps the flexibility and modularity that is GURPS, but greatly reduces the front-loaded chargen for which it’s justly (in)famous. 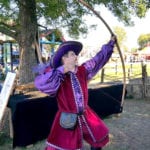 I liked it then, I like it now, and when it comes to sitting at the table, I know that I will be able to reflect my character’s actions in the three traits above in every scene and interaction.

Now I can go slay some dragons. Best if I find ’em and do ’em first. I’ve got my Elvish Longbow chucking quarter-pound arrows for 2d+5 impaling damage each. Or I bring the armor-piercers at 2d+5 (2) pi.

It’s the only way to be sure.