The Alien Menace game is on hiatus, but one day I’ll get back to it. When that is I do not know, but I swear I should be able to start it up again, and I need to play GURPS again. It was also a really fun campaign idea, even if I did trap myself a bit.

But forget that, let’s talk weapons.


I like weapons, and for the game, I wanted to have a slightly-futuristic feel to it. There seems to be a good argument that the 5.56x45mm NATO cartridge is frankly the wrong tool for the job the way that many of the countries want to use it. Fashionably-short barrels which cut enough velocity from the usually 4g projectile that the terminal effects drop off pretty hard, pretty fast.

However, no one can really deny that a short, handy, accurate weapon is a good thing.

So, I decided that my future space commandos would sport a bullpup version of the XM8 rifle. The XM8 has a lot of the things I’d want in a platform: piston driven, modular, etc. I also love bullpup rifles, the look, the feel, and the way you can get a ridiculously short weapon with a long barrel for accuracy and velocity. If you look at the old Bushmaster M17S, you’ll find the overall length of the weapon is 760mm, while the barrel is about 550mm. The variants of the full-sized M16 (A1, A2, A4) are 985-1010mm, but the barrel is 510mm. So 40mm more barrel, but 250mm less length.

I also like the concept of an intermediate cartridge. The 6.8x43mm SPC is my current choice. It’s not quite as long-ranged as (say) the 6.5mm Grendel, which has a very long aspect ratio and a longer cartridge. I’m sure other intermediate rounds (anything between 6-7mm, really) could fit the bill. But I’m familiar with the 6.8 and it also has a nice, even damage rating of 6d, so yay.

Ultimately, though, I wanted an advanced-ish weapon that could be given out. Fortunately, I’m not the only one with such ideas, and a quick Google search for “bullpup XM8” provides much inspiration. I particularly like the one highlighted to the right by PatTheGunartist.

The bog-standard weapon is basically something like a 16-18″ barrel in a bullpup. It probably looks something like the one above. That’s the C version, for carbine. The S version is “short,” which is probably cut down in both stock and barrel, and loses a bit of accuracy and damage in exchange for lighter weight, lower bulk. The SW is a support weapon, which is a bit heavier and uses 100-round drums and a heavier, longer barrel. The DMR is a semi-auto-only Designated Marksman’s Rifle, accurized. It probably has a 24″ barrel or something like that – bullpups can have very long barrels and still be handy. If, for example, you made a rifle as long as the M16A4 but in an M17S frame, the barrel length could be something like 31″ (likely more than you need).

So that’s the set of primary weapons. 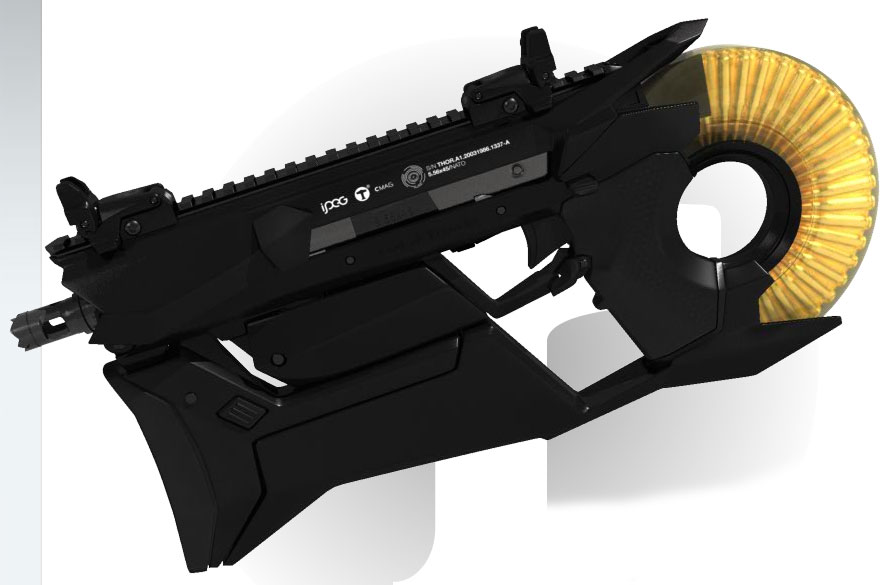 I completely stole this likely-impractical but ultimately very cool PDW by Pascal Eggert. It’s got a pretty unique C-shaped magazine, but it’s also a very compact weapon. Plus: super-cool looking. I gave it the full benefit of the doubt in stats, but did it also in 6.8×43 SPC for ammo compatibility. You lose a few points of damage for increased ammo capacity and lighter weight, but not that much lighter. It’s a good compliment to a very large weapon, like a grenade launcher or sniper rifle.

The Barrett XM500 and MP7 are both real guns, ported over to my fictional Oliver Industries or whatever – I basically took the entire H&K weapon catalog and said that all of these weapons are really made by Oliver Indistries, my Patron in the game. Maybe there was a merger.

The PDW at 3d(2) is an assault rifle like penetration but in a pistol-sized package. Not sure if any of the characters took one; the bad guys have tended to require bigger guns than this. Same thing with the Kahr concealable pistol, which again is the last-ditch category.

I wanted to give the guys a bit of hypothetical weaponry that was fun enough to want to add to a character sheet, but no so crazytown that the players would balk at being supplied with weapons that could not be manufactured in the time frame of the campaign.

Thus far, they’ve had fun with it and used the weaponry to good effect. I hope to start up the game again at some point.

Until then, enjoy the hardware.