My article in this latest issue of Pyramid, The Broken Blade, presents an alternate framework for weapon breakage based more or less on looking at the HP of the weapon in question. In fact, the basis for the calculations I did was to (say) compare the HP of a sword (2-4 lbs of steel) to some figure of damage that would approximately 1.44 times that number if it were to risk breaking that sword.

1.44 times what? Well, that’s the cube root of 3, or the HP of an object that weighs three times that of the weapon.

Anyway, I wanted something that would take that “three times the weight of the parrying weapon” rule from the Basic Set, and make that something where it was related to the raw damage coming in. In melee combat, at least, an extra point of Strength is an extra point of swing damage, and a half-point of thrust. That settled the basic principle.

Let’s take the example of a 2.5-lb sword. As an unliving, homogeneous object, it should have 8 x cube root (2.5 lbs) in HP, which is about 11 HP. That’s also roughly the ST of the weapon, which is one of the reasons I wound up using it a a proxy for all that math. It worked out OK

Anyway, some fiddling with actual results – what breaks, what doesn’t – got me to the values in question. ST on defense, about 1.5 x ST when attacking, though caveats may apply, etc., etc., read the article, etc.

I did want to take into account what happens when you bash your weapon into something hard. Originally, that was because the article started as The Cutting Edge, which was an attempt to put both wounding modifier and penetration modifier (armor divisor) on a sliding scale that corresponded with the Size and Speed Range Table.

The armor rules were, again, tweaked a lot, especially since +Christopher R. Rice was looking at them and playing them in actual games.
But in the many years the article sat in development hell (mostly mine), it never once, until last night, occurred to me that smacking your blade into armor and smacking it into a shield might be a teensy bit related.

How could you miss that?

Damage to shields is an optional rule as it is. So thinking about the shield as something that might be damaged by a normal blow didn’t really enter into my thinking.
Likewise, shield bashes are interesting, but really have only seen use in games that I’ve played in as part of nifty Dual-Weapon Attack combinations, almost always with an edged shield for more damage.

Using a shield as a weapon to break another weapon? It’s never really come up.

Certainly came up in a pretty cool movie, though:

OK, tell me about shields

It probably should, though. Look at the weights of shields in the Basic, and consider what mass parrying weapon is threatened by it. There’s also some other info in here that I’ll get to later. 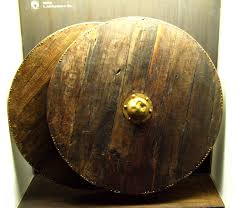 The first thing that’s clear is that you can potentially break a knife with a light shield, a sword with a small shield. Many of the lighter swords are threatened by a small shield, actually. A medium shield has a 5-lb threat range, which will put in danger of breaking darn near any hand weapon that’s not a polearm or a two-handed axe or sword. The 25-lb large shield takes that and trumps it – there are very few weapons that weigh more in the Basic Set. Also note that Low-Tech revised the shield HP numbers down by half or more. This is good.  Extra robustness should be represented by more DR (for metal facing, for wood just use DR 4 like an axe haft) or higher HT.

Low-Tech, of course, tones down the (too-high in many cases) weight of weapons (and armor, of course) which brings even more hand weapons into the “don’t parry that” category. A small shield, with a threat range of 2.5 lbs, will actually do a fair number on most all one-handed swords. As a by-the-way, how thick are these things? If we assume about 45 lbs per cubic foot, and that a circular medium shield, covering a warrior from “chin to thighs” as per Low-Tech, is 3′ in diameter. That’s about 7 square feet. So a 15-lb shield made of a 45 lbs per cubic foot material should be 1/3 cubic feet. So the shield is only 1/21 feet thick, or about 0.6″ if it’s made of oak. That doesn’t strain my belief at all. If anything, that seems thin. Anyway . . .

Note that future research on this shows that 0.6″, or roughly 15mm, is likely quite thick for many shields. Viking style shields seemed to be around 7-9mm at the boss, and the last inches might taper down to 4-5mm including several layers of hide; the underlying wood could be very thin indeed. Most of my trying-to-be-accurate shields that I build come in at about 6-7 lbs for shields in the 34″ diameter range.

Shields are interesting in that they’re the only weapon that doesn’t have a ST rating. Normally, of course, they aren’t used on the attack, but notionally, a ST 3 pixie could use one of these things as a weapon, assuming it could lift it at all.

Looking at ST rating in two ways gives us the two columns above, both of which are total guesses. The first ST is based on half the shield’s HP, which are calculated as per the usual 8xcube root (weight). That means an average ST warrior can wield a medium shield as a weapon.

Instead of HP, perhaps Basic Lift? If we say that a ST 11 warrior (Basic Lift 24 lbs) is using a medium shield comfortably (15 lbs) that sorta suggests that ST could be based on the shield weight being about 2/3 of the user’s Basic Lift. That gives the final column.

Neither figure seems too bad, recognizing that a 2-lb sword (10 HP) requires ST 10. That’s not carried and wielded close to the body like shields are, etc. In any case, either figure allows a medium shield and broadsword to be carried and used by a ST 10 or ST 11 character, so that’s not going to upend anyone’s game.

So, less ST to wield, but plenty o’ hit points. Only thr damage – about half swing – due to the awkward swing with limited lever arm. Want more damage, use All-Out or Committed Attack.

Shields Will Be Splintered 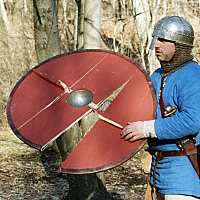 Now, personally, I’d want that maul to threaten a medium shield – this is a lesser version of Eowyn vs. the Witch King.

If we use the shield’s base full HP as a defense threshold, even the maul will have to work hard to threaten the medium shield. Mostly, the thing can just take it. That doesn’t pass my sniff test, given that we’re talking about an inch thick or less of wood. We’ll move on from there, though if there’s better historical evidence out there, I’m willing to hear it.

This is the rules as written in the article. Our medium shield can ignore the club totally. That works for me – the shield has a safety limit of 2d-2 or 1d+4.

The stronger guy with the sword has a slight chance of threatening the shield with a high damage roll, but with a failure increment of 2, even a full-damage attack will only make the shield roll at a -1 penalty – that’s HT+1, or a 13 for a Good shield. Very low odds of breakage. 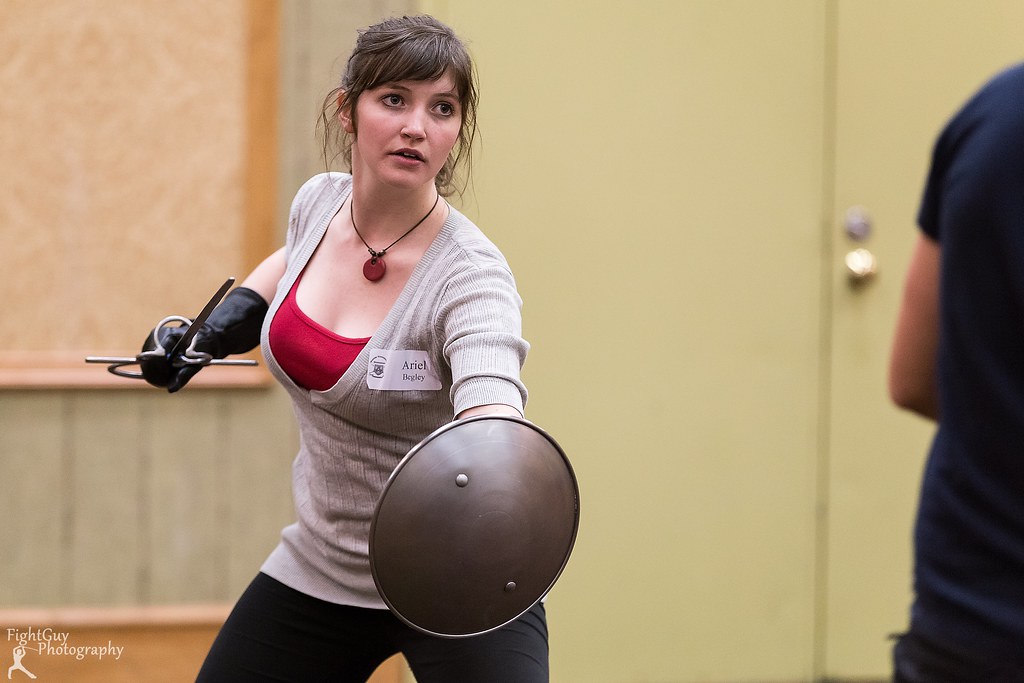 The maul? Max damage will impart a -6 penalty to HT, so rolling at 8- to avoid a real issue. This thing’s going to take damage every time, and cheap shields are asking for catastrophic failure.

Again, this works for me.

Treat shields as having a ST rating of either half their HP (but use the HP values from Low-Tech, or look it up using the values in the back of the Campaigns book, rather than the HP listed in the Basic Set), or calculated as I did from Basic Lift. For simplicity, I’d just use half the Low-Tech HP because it’s already calculated for you.

Shields On the Attack

Personally, I’d say that unrimmed, unreinforced shields would use their Defense Threshold (ST) when attacking, because they’re not designed that way. Rimmed or edged shields are built with that in mind, and use the x1.5 multiplier per the article.

Bang a Gong, Break a Sword

These lyrics will impress no one.

But if you slam your weapon into someone else’s shield, consult with Striking Hard Surfaces on p. 6 of the article. Again, metal-rimmed shields might qualify for the larger penalty, and if the entire shield is reinforced with, or made of, metal, would count as armor.

This was a bit of a hole in the rules, and now it’s plugged. I feel better. I did, however just sort write this without playtesting, but it doesn’t feel too awful to me.

Our Witchking could lift Eowyn off the ground with one hand, and that tends to be ST 20 to ST 25, probably on the higher end, because while Miranda might weigh 120 or so lbs, the mail shirt she’s wearing is going to push that up plenty. And that’s assuming that the ginormous flail doesn’t require even higher ST. A flail wielded by Mr. Witchking is going to strike for something like 4d or 5d damage. That poor wooden shield she had was doomed from the beginning.

The surprising thing for me working this one out, though, is how effective shield vs weapon would be if you can absorb the hit penalty to strike your foe’s weapon. Shields – even the lighter ones with lower DB – are heavy.